Sen. Joe Manchin, D-W.Va., walks to a caucus lunch at the Capitol in Washington. (AP)

Sen. Joe Manchin, D-W.Va., threw ice cold water on President Joe Biden’s hopes for passage of his signature Build Back Better Act when he told Fox News that he was a "no" vote on the current $1.75 trillion package.

The next day, Dec. 20, Manchin told West Virginia radio host Hoppy Kercheval that he simply couldn’t live with the increased spending when the federal debt stands at $29 trillion. Biden says the plan would have no impact on deficits because higher taxes on corporations and the wealthy cover the cost, but there’s political debate on that point.

Beyond the possible impacts on the national debt, Manchin said he also thought the bill failed to target aid to the poorest households. He gave the example of the child tax credit, a tax break for parents that would be expanded in the Biden-backed proposal.

Manchin has talked before about making sure at least one parent is working before they can claim the child tax credit. But here, his focus is on means testing. The bill does not treat wealthy households the same as much poorer ones. People making as much as about  $400,000 can take advantage of the tax credit, but that’s under an older law, not the expansion offered in Build Back Better.

We raised that issue with Manchin’s press staff, and they said they had no comment.

The child tax credit is a nearly 25-year-old tax break meant to help parents pay for raising kids. Before the pandemic, the credit was worth as much as $2,000 for any child under 17. In 2021, Democrats made the program more generous. For children up to age 5, the credit rose to $3,600. They also added more money and one year of eligibility for children over 5; for each child between 6 and 17, the amount went up to $3,000.

The increases were turned into fully refundable tax credits, which meant that even people who didn’t make enough to use all of the tax credit would still get the full amount. These changes only lasted through 2021.

The Build Back Better Act would extend those increases for an additional year, through 2022.

But here’s the relevant part where Manchin’s claim is concerned: These benefits phase out with rising income.

It’s a little complicated, but for the bump in payments to either $3,600 or $3,000 (depending on the child’s age), that portion would start coming down for single parents making over $112,500, and for couples making over $150,000. Those income levels are higher than for typical aid programs like temporary cash assistance and housing assistance, but they are still a form of means testing.

The Congressional Research Service, the nonpartisan analytic arm of Congress, found that the hike delivered by the Build Back Better Act would be gone for a typical married couple by the time they made about $200,000. After that, they would be back where they were under the pre-pandemic rules. 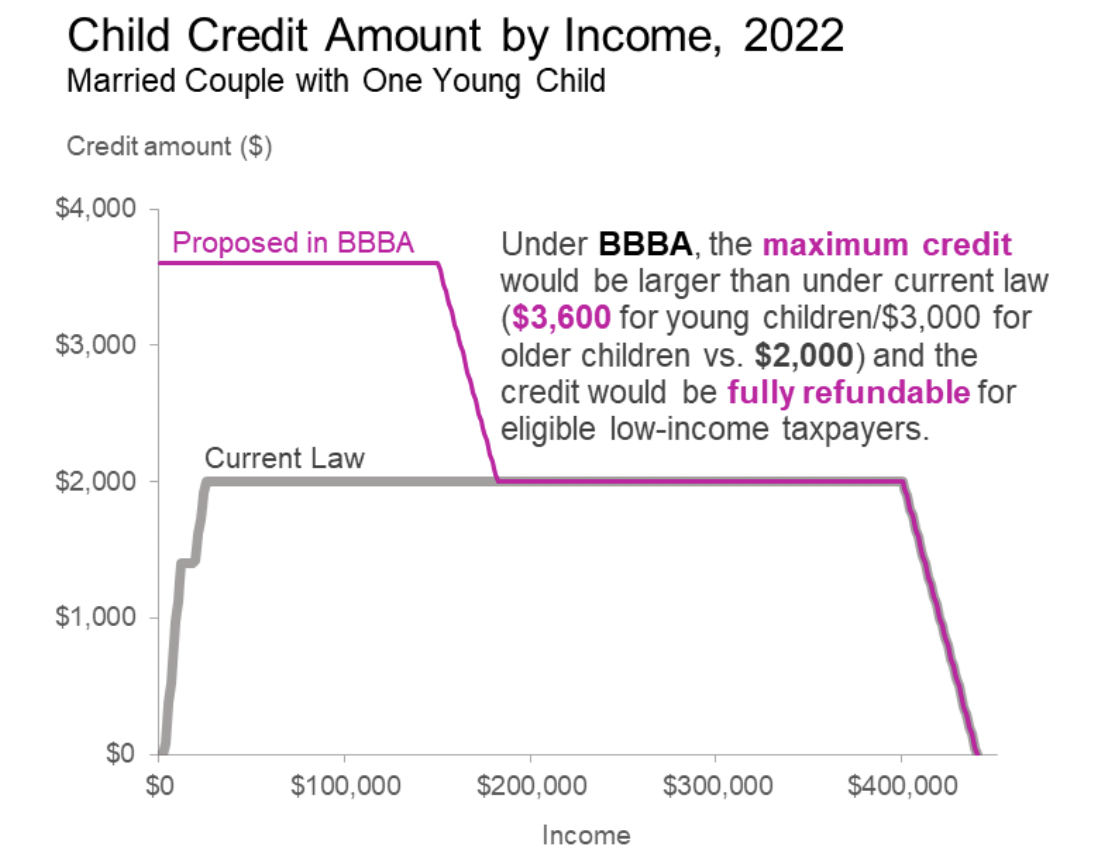 Every analysis finds that the provisions in the Build Back Better Act would reduce child poverty. There are different opinions over how big a reduction would come, but the Center for Budget and Policy Priorities, a left-leaning think tank that advocates for government aid to poor and working families, estimated that it would lift 4.1 million children out of poverty.

Part of this stems from the bill’s aid to the very poorest households. By making the program fully refundable, it delivers the biggest increases to those who didn’t make enough to qualify for much if any benefits under the old rules.

"Anyone with yearly income under $2,500 used to get zero child tax credit," said Elaine Maag, principal research associate with the Urban Institute.

The benefit rose slowly — 15 cents on the dollar — but even with that, Maag said families making less than $25,000 were unable to take full advantage of the program.

If Manchin meant that people making as much as $400,000 could get some money from the program, he would have more of a point. But his comments apply to the program as it stood before the pandemic, not to the changes in the Build Back Better Act.

The value of the tax credit for those wealthier households is less than for people making $70,000, but they still get some money.

The increases offered in the Build Back Better Act begin to fall starting with single parent families making over $112,500 and couples making over $150,000. By the time a household makes $200,000, those benefits have disappeared.

Under the pre-pandemic rules, less generous benefits continue for married couples making as much as $440,000. But that exists totally apart from the Build Back Better Act. Under any reading of the concept of means testing, the Build Back Better Act uses that approach. A household making $70,000 would see higher benefits than a comparable household making over $200,000.

Urban Institute, How a Permanent Expansion of the Child Tax Credit Could Affect Poverty, July 2021

Urban Brookings Tax Policy Center, What is the child tax credit?, May 2021