Ryan Fournier
stated on June 11, 2020 in a status:
“All money donated to Black Lives Matter goes directly to Act Blue, a Democrat Super PAC that then feeds the money to Democrat candidates.”

The dome of the U.S. Capitol is visible as a sign that reads "Black Lives Matter" hangs on an overpass on North Capitol Street in Washington on June 2, 2020. (AP)

Since protests over the death of George Floyd erupted in late May, donations to civil rights organizations have surged. But some conservative commentators say not all the money is going toward the cause.

In a since-deleted June 11 Facebook post (archived here), Ryan Fournier, co-founder of Students for Trump, claimed that donations to Black Lives Matter were actually being funneled to Democratic campaigns.

"All money donated to Black Lives Matter goes directly to ActBlue, a Democrat Super PAC that then feeds the money to Democrat candidates," he said. "Congratulations, you played yourself."

The post was flagged as part of Facebook’s efforts to combat false news and misinformation on its News Feed. (Read more about our partnership with Facebook.) Fournier deleted the post after we reached out to him, but the Twitter version remained posted.

Other conservative commentators, such as Candace Owens and the Hodgetwins, Instagram posts have made similar allegations. So we looked into them.

The post is inaccurate. ActBlue is a platform for people to contribute to Democratic campaigns and other causes like Black Lives Matter. It passes along donations to organizations that use its fundraising platform — it doesn’t pocket the money itself.

We reached out to Fournier for the source of his claim and haven’t heard back. His assertion appears to stem from a video circulating on social media.

The video shows a screen recording of an Instagram story from a user in Miami. He attributed the information to a conservative Instagram account called "Telerevela," which started posting in February and publishes conspiratorial posts about the coronavirus pandemic and protests over police brutality in Spanish. Telerevela posted an identical video, albeit in Spanish, on Facebook around 1 a.m. on June 11.

The video, which has nearly 2 million views on Twitter, lays out a false trail for Black Lives Matter donations.

In it, the user tries to donate to Black Lives Matter. When they tap the donate button on the movement’s website, they’re directed to a web address that has ActBlue in it. The donation page also has a disclosure about the nonprofit. 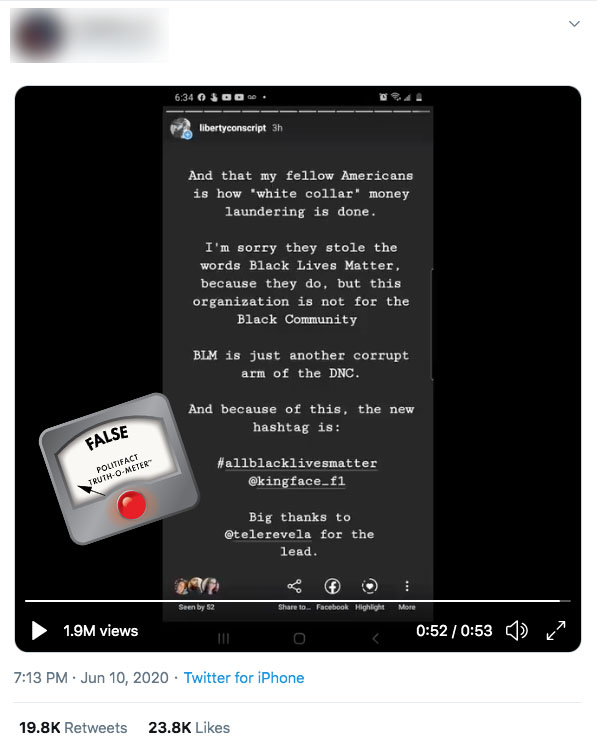 Then, they open up a page from OpenSecrets.org — the website of the nonprofit Center for Responsive Politics, which tracks money in politics — to see how ActBlue spends its money. They highlight what appear to be several multi-million dollar contributions to Democratic presidential candidates like Sen. Bernie Sanders and former Vice President Joe Biden.

"And that my fellow Americans is how ‘white collar’ money laundering is done," reads some text at the end of the video. "BLM is just another corrupt arm of the (Democratic National Committee)."

The video misrepresents what ActBlue does, as well as where donations to Black Lives Matter actually go.

ActBlue told us in an email that it passes along contributions from its fundraising platform directly to the 501(c)(3) charities or 501(c)(4) nonprofits that asked for them. Its function is similar to PayPal or Stripe, which are conduits for online purchases.

OpenSecrets also clarified that point in a tweeted response to Candace Owens’ post, saying that "a donation to BLM through ActBlue goes just to BLM, not any other group."

ActBlue is a fundraising platform used by Democrats & progressives. Like WinRed on the right, many candidates use it to process donations but that money isn't pooled to be shared across candidates or groups. A donation to BLM through ActBlue goes just to BLM, not any other group. https://t.co/rb5sF7VbwA

OpenSecrets compared ActBlue with WinRed, a fundraising platform for Republican campaigns and causes that was launched in 2019 to compete with ActBlue. Both organizations facilitate fundraising for aligned political groups.

Despite being classified as political action committees by the Federal Election Commission, ActBlue and WinRed have "non-contribution accounts," meaning they have separate bank accounts that "will not be used to make contributions, whether direct, in-kind or via coordinated communications, or coordinated expenditures, to federal candidates or committees," according to the FEC.

RELATED: ‘Defund the police’ movement: What do activists mean by that?

As the Center for Public Integrity reported when WinRed was launched, the idea is to make it easier for political campaigns to fundraise small-dollar donations.

"Take the 2018 midterm elections, when Democratic House and Senate candidates outraised Republicans more than two to one in contributions from individuals," the center wrote. "Republicans pointed to ActBlue, which helps donors more easily give money to Democratic candidates and liberal political groups, as a big reason why."

A popular claim on social media asserts that donations to Black Lives Matter go directly to ActBlue, which uses them to fund Democratic campaigns.

It’s wrong. ActBlue is a nonprofit technology organization that provides a platform for people to contribute to Democratic campaigns and causes. Black Lives Matter and Democratic presidential candidates use the platform to fundraise.

ActBlue does not pocket donations that are facilitated by its platform — it routes donations to organizations in a similar way to the Republican fundraising platform WinRed.

Correction, June 16, 2020: A previous version of this article stated that the Black Lives Matter Global Network Foundation, Inc. is a nonprofit. In fact, it is in a fiscal sponsorship with a nonprofit. It is not yet its own 501(c)(3) organization.