"Our actions to slow the spread of this virus are having an impact. Specifically, we see a direct correlation to the start of the statewide mask requirement at the end of June. Two to three weeks after implementing this requirement, we started to see the beginning of these more stable trends."

Is it true that there’s a "direct correlation" between North Carolina’s mask requirement and COVID-19 stabilization?

Data shows that the number of new reported COVID-19 cases is beginning to stabilize. Experts told PolitiFact the mask law and case count could be related, but that it’s hard to quantify the law’s impact.

Gov. Roy Cooper announced the mask requirement on June 24 and it went into effect on June 26.

It can take up to 14 days between the time someone was infected and the time they start showing symptoms, according to the U.S. Centers for Disease Control and Prevention. That means someone could have contracted the virus before the mask mandate, but not shown symptoms or tested positive until after the mask requirement was in effect. 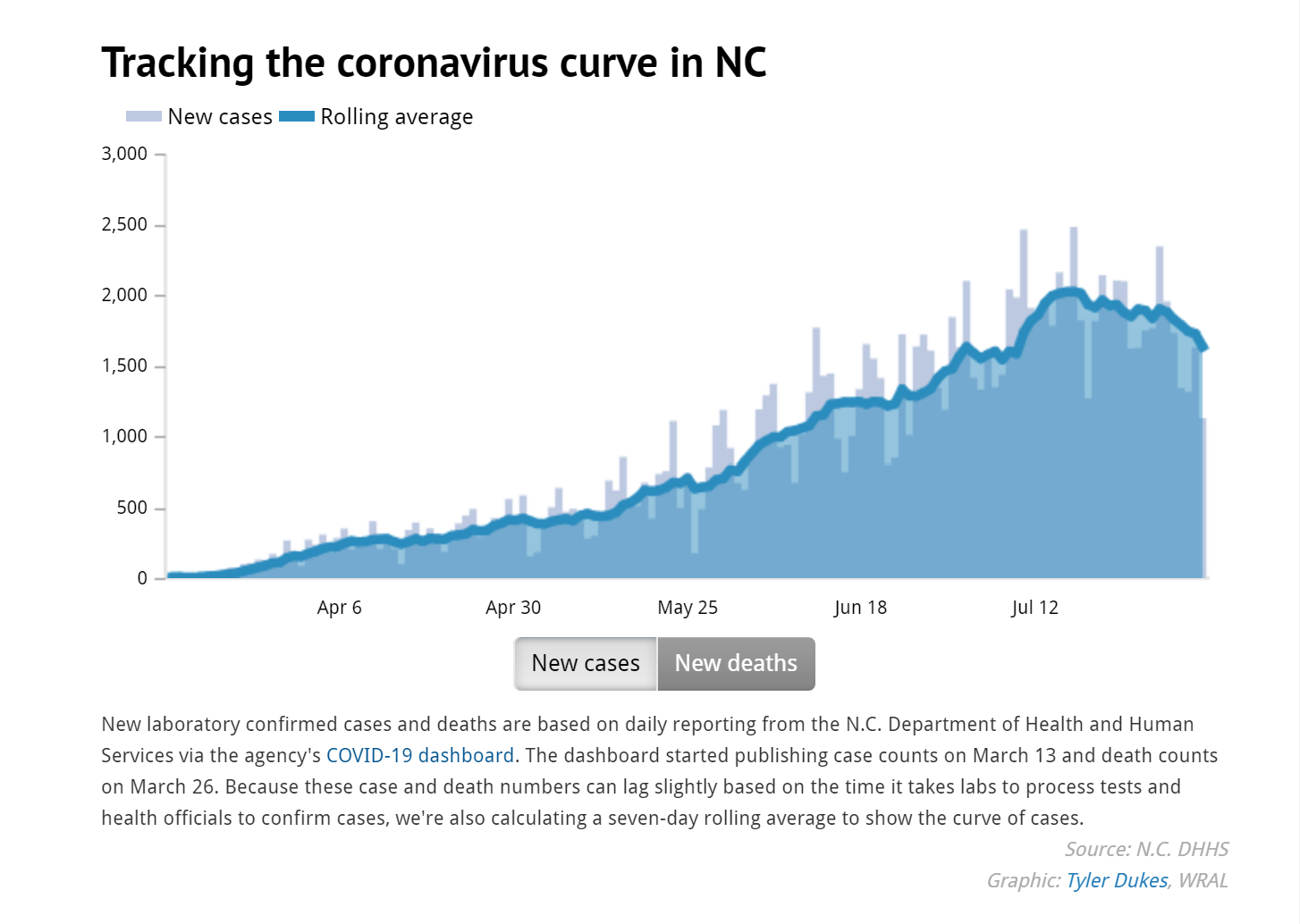 One way experts measure coronavirus trends is by calculating the 7-day rolling average for the number of new cases or deaths per day. The N.C. Department of Health and Human Services (DHHS) and WRAL both track this metric.

The average number of new cases per day rose until about July 18, when DHHS reported 2,481 cases. The daily count started to drop after that date, and the rolling 7-day average has been less than 2,000 cases ever since.

So Cohen is right that the number of new cases is stabilizing. Is that a direct result of the mandate?

There’s evidence that widespread mask-wearing has helped reduce the spread of the novel coronavirus, as we’ve previously reported.

While they agreed that there may be a correlation, they say there’s not enough evidence yet to determine how much influence the mask rule had on the stabilization.

Other factors -- such as social distancing or testing availability -- could also play a role.

But reviewing that data typically takes months, said Ryan McNamara, a research associate in UNC’s Department of Microbiology and Immunology.

"There's just a lot of variables at play that need to be accounted for," he said.

There’s a popular saying in research: "correlation does not mean causation." In this context, it means that the mask law may not have caused the dip in new COVID-19 cases, even though there are signs a cause-and-effect relationship could exist.

"That said, Dr. Cohen and her team are in possession of much more data than I am. I think her statement was carefully worded and has scientific merit."

Ali Khan, dean of the College of Public Health and professor of epidemiology at the University of Nebraska Medical Center, agreed that it’s premature to directly credit the mask rule for the leveling-off of cases.

But he believes Cohen’s claim is fair, given that "other data that (shows) masks work and accounting for numerous caveats such as what else happened 2-3 weeks ago."

However, Bloom said it’s possible that the mask requirement not only prompted more people to wear masks -- but to start taking other precautionary measures as well.

"I think it is safe to say they may have contributed to the more stable trends, assuming the trends are indeed stable for a couple of weeks," Bloom said.

As of August 3, the state’s rolling 7-day average remained below 2,000 cases and was still declining.

Based on the data available in late July, experts said there does appear to be a correlation, but it’s too early to draw conclusions about it. Verifying the strength of the correlation can take months.

The statement is accurate but needs clarification or additional information. We rate it Mostly True.

Email correspondence with Kelly Connor and Chris Mackey of the North Carolina Department of Health and Human Services.

The North Carolina Department of Health and Human Services count of coronavirus cases in the state.

Interim clinical guidance from the U.S. Centers for Disease Control and Prevention for management of patients with confirmed coronavirus disease (COVID-19), updated June 30, 2020.

Email correspondence with Ryan McNamara, a research associate in UNC’s Department of Microbiology and Immunology.

Ali Khan, dean of the College of Public Health and professor of epidemiology at the University of Nebraska Medical Center.

Email correspondence with Isaac I. Bogoch, associate professor for the University of Toronto’s Department of Medicine and staff physician at Toronto General Hospital.