Jerry Tillman
stated on November 15, 2019 in a speech:
Says the U.S. Constitution "doesn’t say anything about (redistricting) being fair. … it’s set up to be partisan."

NC Sen. Jerry Tillman gives a speech at the legislature in downtown Raleigh.

When it comes to drawing election maps, the courts have often found North Carolina guilty of breaking the rules.

So when the time came to approve new Congressional maps earlier this month, legislators had a lot to say about those rules. Video of one speech, in particular, got lots of attention.

State Sen. Jerry Tillman, an Archdale Republican, can be seen in a 54-second video chastising Democrats for having a "lack of knowledge about what the Constitution says" about redistricting.

"It doesn’t say anything about being fair," Tillman says. The Constitution gives redistricting responsibility to the states, a process Tillman then described this way:

Is it true that the U.S. Constitution doesn’t say anything about being fair? And is Tillman right that the redistricting system is "set up to be partisan?"

The video was posted on social media by state Sen. Jeff Jackson, who has 86,000 followers on Facebook and 52,000 Twitter followers. The video was viewed about 100,000 times in total, Jackson told PolitiFact.

Given the video’s exposure, we felt it necessary to clarify some of Tillman’s statements with him. Redistricting can be complicated, so it’s important to distinguish what the U.S. Constitution says from what North Carolina’s Constitution says.

Tillman didn’t respond to an email or a phone call about his comments, so he didn’t clarify his statements to us. With that in mind, we felt the need to clarify what the U.S. and N.C. constitutions say about drawing election maps.

We’ll take this in two parts.

First: does the U.S. Constitution say anything about the redistricting process being "fair?"

This is a loaded question that’s led to court cases and legal challenges across the country. At the risk of going too far into the weeds, we’ll touch on some ways federal laws attempt to ensure fairness -- as well as some ideas that have been sought but not adopted.

So what is "fair?" Although the word does not appear in the Constitution, some scholars say it is a basic concept in many constitutional principles.

One idea of fairness: drawing districts that would give each major political party equal odds of winning.

But the U.S. Constitution does not explicitly mention fairness in terms of political parties and the U.S. Supreme Court recently punted on an important case from North Carolina that tested this concept.

Plaintiffs argued North Carolina’s Congressional maps give Republicans an extreme partisan advantage. The court, however, found that the "partisan gerrymandering claims present political questions beyond the reach of the federal courts."

"So there’s nothing that would prevent them from drawing partisan redistricting maps," said Hans von Spakovsky, manager of the Election Law Reform Initiative at the Heritage Foundation.

In other words, "the Court said that a jurisdiction can engage in some partisan gerrymandering consistent with the US Constitution, as long as it doesn’t go too far," said Justin Levitt, associate dean for research at Loyola Marymount University law school and founder of allaboutredistricting.org. But, he added, the Supreme Court said "federal courts have no power to determine what ‘too far’ is."

Club for Growth
stated on April 26, 2022 in an attack ad
Says J.D. Vance said, “People who voted for Trump voted for him for racist reasons.”

How about other ways to define "fair?"

The 14th Amendment to the Constitution authorized the government to punish states that abridged citizens’ right to vote by proportionally reducing their representation in Congress, as explained on the U.S. Senate’s website. The 15th Amendment prohibited states from disenfranchising voters "on account of race, color, or previous condition of servitude," the site says.

On this front, North Carolina lawmakers have gotten in trouble multiple times.

Aside from that, the Constitution also addresses district populations. The National Conference of State Legislatures explains it this way: "For congressional redistricting, the Apportionment Clause of Article I, Section 2, of the U.S. Constitution requires that all districts be as nearly equal in population as practicable."

So, in some ways, the Constitution does aim for fairness, Levitt said.

Now let’s look at Tillman’s claim that the redistricting process "is set up to be partisan."

"But there’s nothing in the (U.S.) Constitution about the prevailing party taking control," Levitt said. "Some may read that as the natural consequence of giving it to the states, but it’s certainly not an express grant in the Constitution to be partisan."

The Constitution gives states the responsibility of crafting election procedures. But the text of the U.S. Constitution doesn’t say anything about district maps in particular. 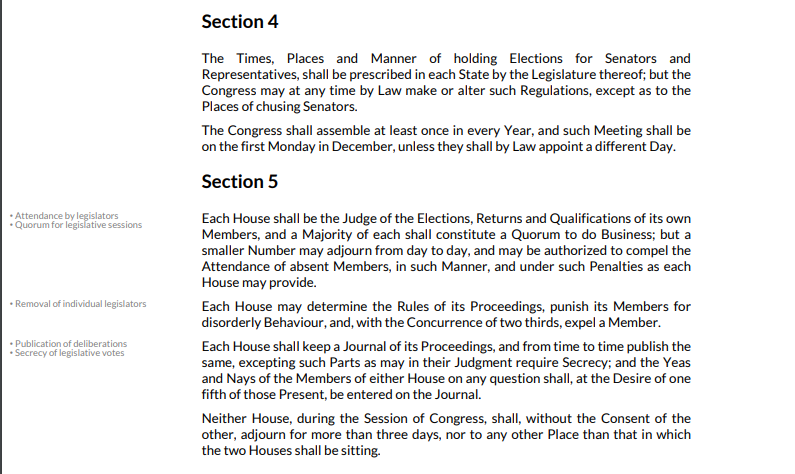 In North Carolina, the state Constitution allows the legislature’s dominant political party to have control over the process. And legislators are allowed to use partisan data in the redistricting process.

But the U.S. Constitution allows states a freedom to construct their own rules. And some other states have gone to great lengths to make it non-partisan.

"Just because the federal Constitution is silent doesn’t mean the states can’t create rules for their own districts," said Michael Li, senior counsel for the Brennan Center for Justice.

Some states set up an independent commission for making maps. Some prohibit map-makers from favoring a party or an incumbent.

Tillman said the Constitution "doesn’t say anything about being fair," and later added: "it’s set up to be partisan."

On fairness, the Constitution aims to guarantee equal weight to each voter. But it doesn’t guarantee that the nation’s political parties will have the same odds of winning a Congressional seat.

On the set-up of the redistricting process, Tillman is right that North Carolina’s system yields itself to partisan maps. But he’s wrong to suggest that the U.S. Constitution encourages that system across the country. States have the freedom to enact their own redistricting rules, and some have attempted to tackle "fairness" from a lot more angles than North Carolina.

These claims are partially accurate but omit important details that would give the public a better understanding of the redistricting system. We rate them Half True.

Tweet by state Senator Jeff Jackson, a Democrat from Charlotte.

A PDF of the U.S. Constitution posted on the U.S. Senate website.

Telephone interview with Michael Li, senior counsel for the Brennan Center for Justice.

A copy of the North Carolina Constitution posted on the legislature’s website.

Explanations of the 13th, 14th and 15th amendments posted on the U.S. Senate website.

Story by PolitiFact, "The legal fight over NC gerrymandering isn’t over. How we got here, and what’s next," posted July 2, 2019.