Sydney Batch
stated on May 23, 2018 in a newsletter:
"Yesterday afternoon the Republicans in the General Assembly used the nuclear option to pass North Carolina's over $20 billion budget."

Sydney Batch, a Democratic candidate for NC House district 37, sent this newsletter on May 23.

Democrats are mad that Republicans plan to change state government spending without their direct input.

Republicans, who hold a supermajority in the North Carolina Legislature, are mostly negotiating budget changes amongst themselves and intend to block any proposed amendments to their bill.

But, if voters were to read one Democrat’s newsletter, they’d get an entirely different picture of the situation.

A May 23 newsletter distributed by Sydney Batch, a Democratic candidate for NC House, overstates what has happened so far.

"Yesterday afternoon the Republicans in the General Assembly used the nuclear option to pass North Carolina's over $20 billion budget," the newsletter said.

It adds: "For the first time in (the) history of our great state, they are not allowing any debate or input on our budget."

The problem with Batch’s statements is that they aren’t accurate. 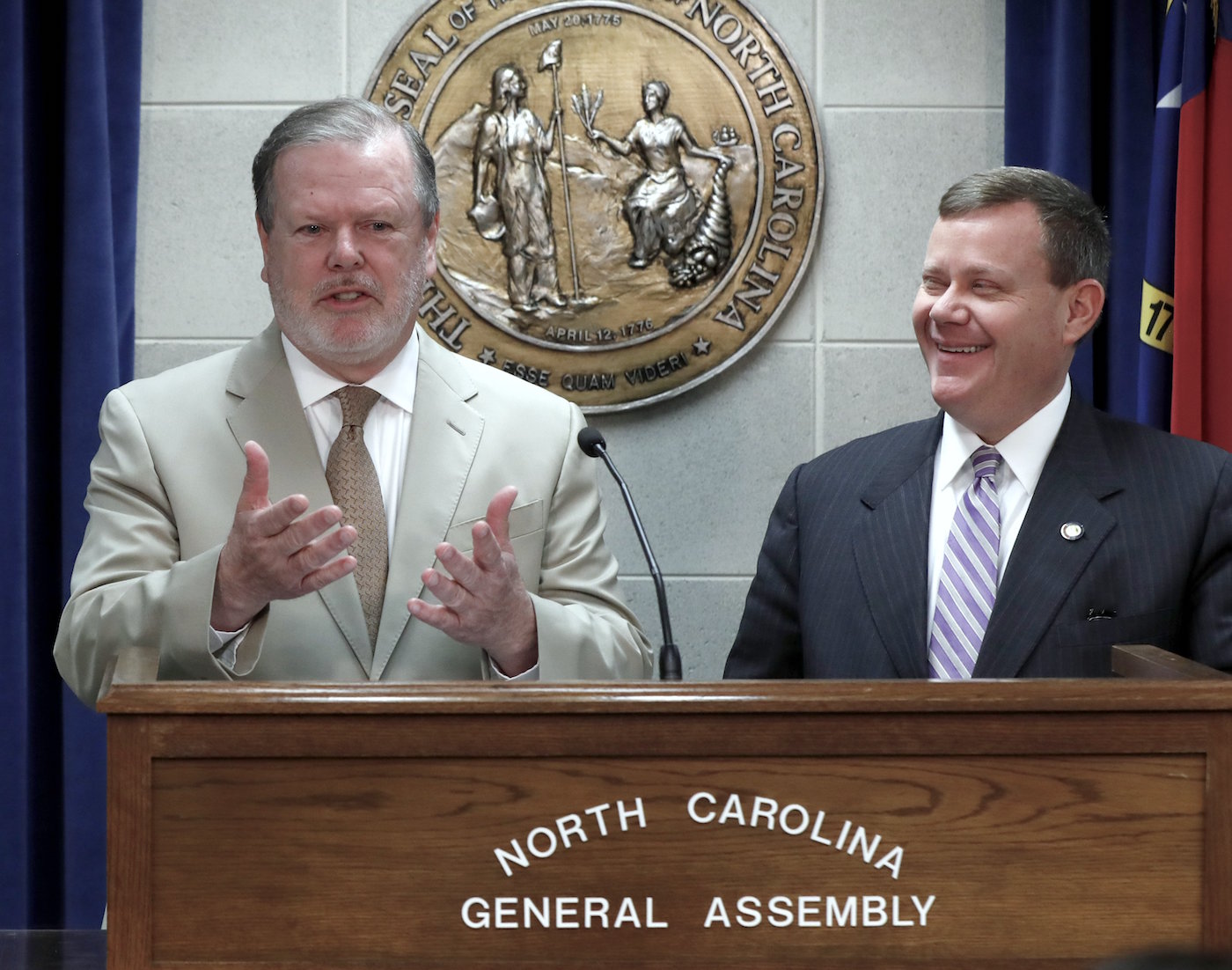 As we write this fact-check, legislative Republicans have yet to vote on or even reveal their full budget plans. And her statement about the lack of debate is also misleading.

Republican leaders plan to gut an old bill and amend it as a "conference report" to include their budget plans, meaning state lawmakers will have no method for amending the legislation. But it remains to be seen whether Republicans will allow debate on the floor of the House and Senate chambers.

Pat McCrory
stated on March 9, 2016 in a post on his Facebook page
"Roy Cooper won't say how he will pay for ‘free’ college tuition."

As for the historical precedent of blocking amendments, The News & Observer story, which Batch linked to in her newsletter, says amendments won’t be allowed for the first time in "modern history." Gerry Cohen, former head of the bill-drafting division in the Legislature, told the Associated Press that legislators haven’t completely skipped the amendment process since at least the early 1970s.

When contacted by PolitiFact, Batch referred to the claim as "an inadvertent typo."

"I meant to type, ‘Yesterday afternoon the Republicans in the General Assembly decided that they are going to use the nuclear option to pass North Carolina's over $20 billion budget,’" Batch wrote in an email

(Whether or not the process Republicans are using can be referred to as "the nuclear option" is another debate altogether.)

"I will retract and edit the statement with the email list shortly. Thanks for bringing it to my attention," Batch wrote. And retract the statement, she did. 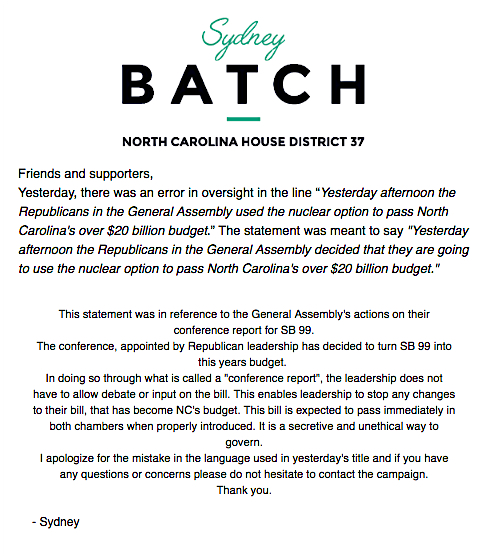 On May 24, Batch distributed a newsletter apologizing for her mistake.

"Friends and supporters, yesterday, there was an error in oversight," she wrote.

In using a conference report, "the leadership does not have to allow debate or input on the bill. This enables leadership to stop any changes to their bill, that has become NC's budget. This bill is expected to pass immediately in both chambers when properly introduced. It is a secretive and unethical way to govern," she said, concluding: "I apologize for the mistake in the language used in yesterday's title and if you have any questions or concerns please do not hesitate to contact the campaign."

Batch said, "Yesterday afternoon the Republicans in the General Assembly used the nuclear option to pass North Carolina's over $20 billion budget." In fact, the budget hasn’t been approved yet. It hasn’t even been put up for a vote.

Batch apologized for the mistake and retracted her statement in a new email – which PolitiFact applauds. But that doesn’t protect her first statement from our Truth-O-Meter. We rate her claim False.

CORRECTION: An earlier version of this story misquoted Gerry Cohen, former had of the bill-drafting division in the legislature, saying that a state budget had previously been approved without going through the amendment process. To clarify, Cohen isn’t sure whether it has happened before. This error doesn’t affect PolitiFact’s rating. 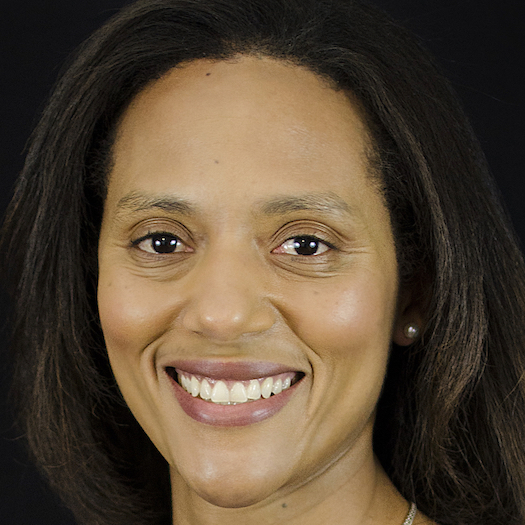 Senate Bill 99, which Republican legislative leaders have said will be the vehicle for their budget changes.

Story by The News & Observer, "For the first time in modern NC history, lawmakers won't allow changes to budget," published May 22, 2018.