This photo, posted on Facebook by Kari Hulgaard, among Newtown, Conn., parents to advocate changes in gun laws, was described as showing then-U.S. Rep. Pete Gallego meeting with Sandy Hook families in June 2013.

In a fundraising appeal, San Antonio state Rep. Roland Gutierrez portrayed fellow Democrat Pete Gallego of Alpine as a "career politician" whose "cozy relationship" with the National Rifle Association prompted him to scrap a meeting with the parents of Sandy Hook children.

As a U.S. House member, we confirmed, Gallego fielded a donation from the NRA, which graded his record highly. But he also met with the parents concerned about gun issues though not at the originally scheduled time, interviews and photos show.

Gutierrez and Gallego, who won a term in Congress after spending more than 20 years in the Texas House, appear to be the highest-profile hopefuls among eight contenders to serve out more than two years left in convicted felon Carlos Uresti’s term representing Texas Senate District 19, which sprawls southwest from San Antonio to the border and west past Alpine and Pecos. The election is July 31, 2018.

Gutierrez declared in a July 18, 2018, campaign email blast that Gallego "in a moment of political cowardice, cancelled a planned meeting with the families of Sandy Hook victims," referring to the 2012 mass shooting at Sandy Hook Elementary School in Newtown, Conn., that left 20 children and six staff members dead.

The Dec. 14, 2012, massacre occurred 20 days before Gallego began what proved to be one term representing Texas’ 23rd Congressional District. But a group of victims’ family members met with individual lawmakers in June 2013, about six months into Gallego’s term.

So, did Gallego cancel his meeting with shooting victims’ families?

A web link in Gutierrez’s email led us to a June 15, 2013, Huffington Post news article recapping efforts by victims’ families and friends to seek a change in law requiring background checks for all gun purchases. Federal law requires such checks for purchases from licensed gun dealers but not in private transactions including gun shows.

The Post story indeed says Gallego canceled his meeting with Newtown Action Alliance, a group that describes itself as a "Newtown-based, national grassroots organization" whose mission is to "achieve the steady and continuous reduction of gun violence through legislative and cultural changes."

Also, the story says, Gallego’s office did not immediately respond to the Post’s request for comment.

But hold on: An update affixed at the end of the story quotes Erin Nikitchyuk, a mother whose son survived the rampage, saying that Gallego rescheduled and then held his meeting with the group, during which he was "conscientious" and "welcoming," Nikitchyuk was quoted saying.

For our part, we asked Nikitchyuk about the described meeting through Facebook messages. She replied: "I absolutely remember meeting with him. In fact, his is the most memorable meeting I had."

Nikitchyuk subsequently messaged us the group’s itinerary from its trip to Washington, D.C., June 12 and 13, 2013 and showing that family members initially expected to meet Gallego at 9:45 a.m. on Thursday, June 13.

Nikitchyuk also connected us with another Alliance member, Kari Hulgaard, who posted to Facebook photos of Gallego in the Alliance-coordinated meeting: 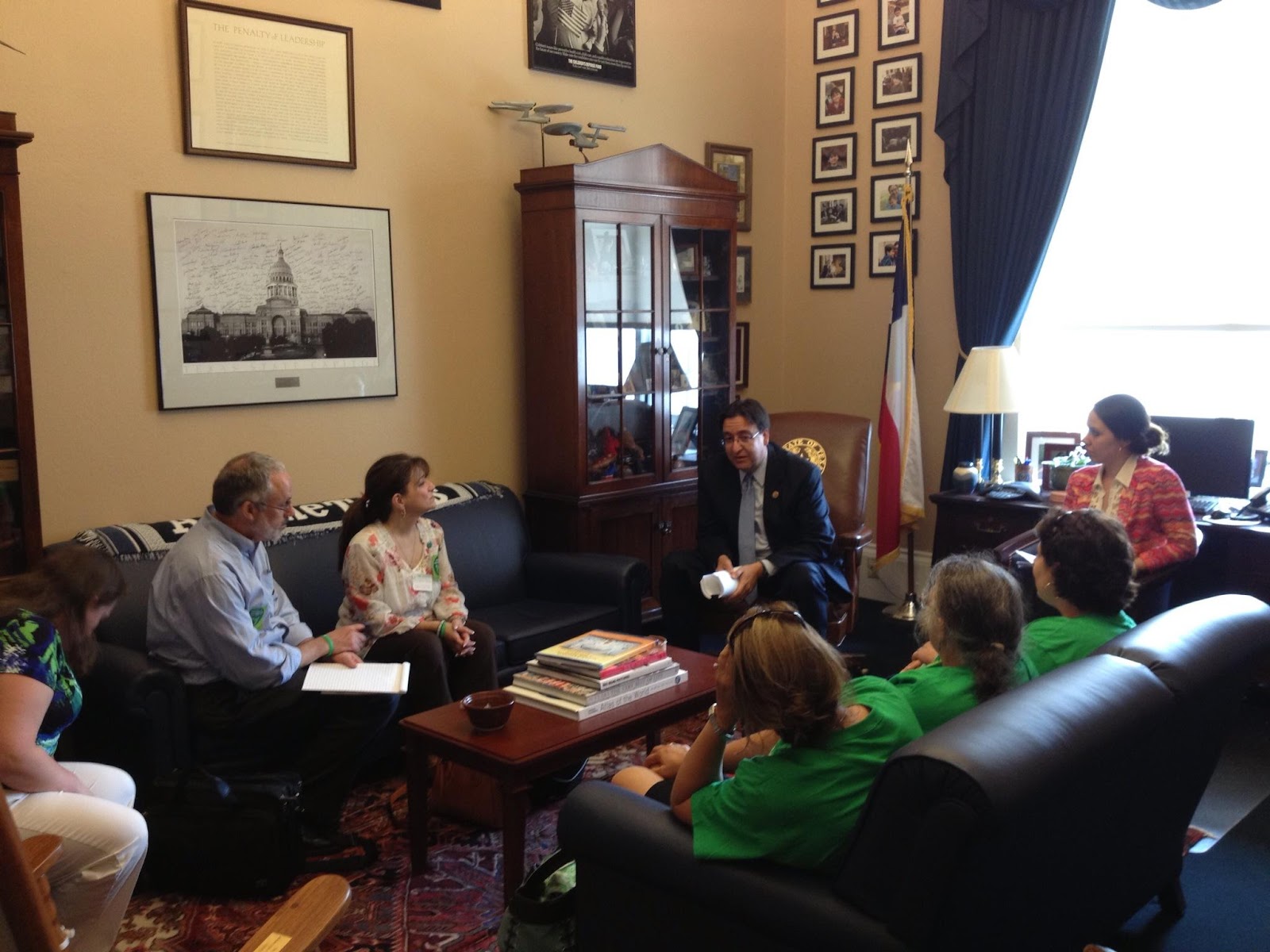 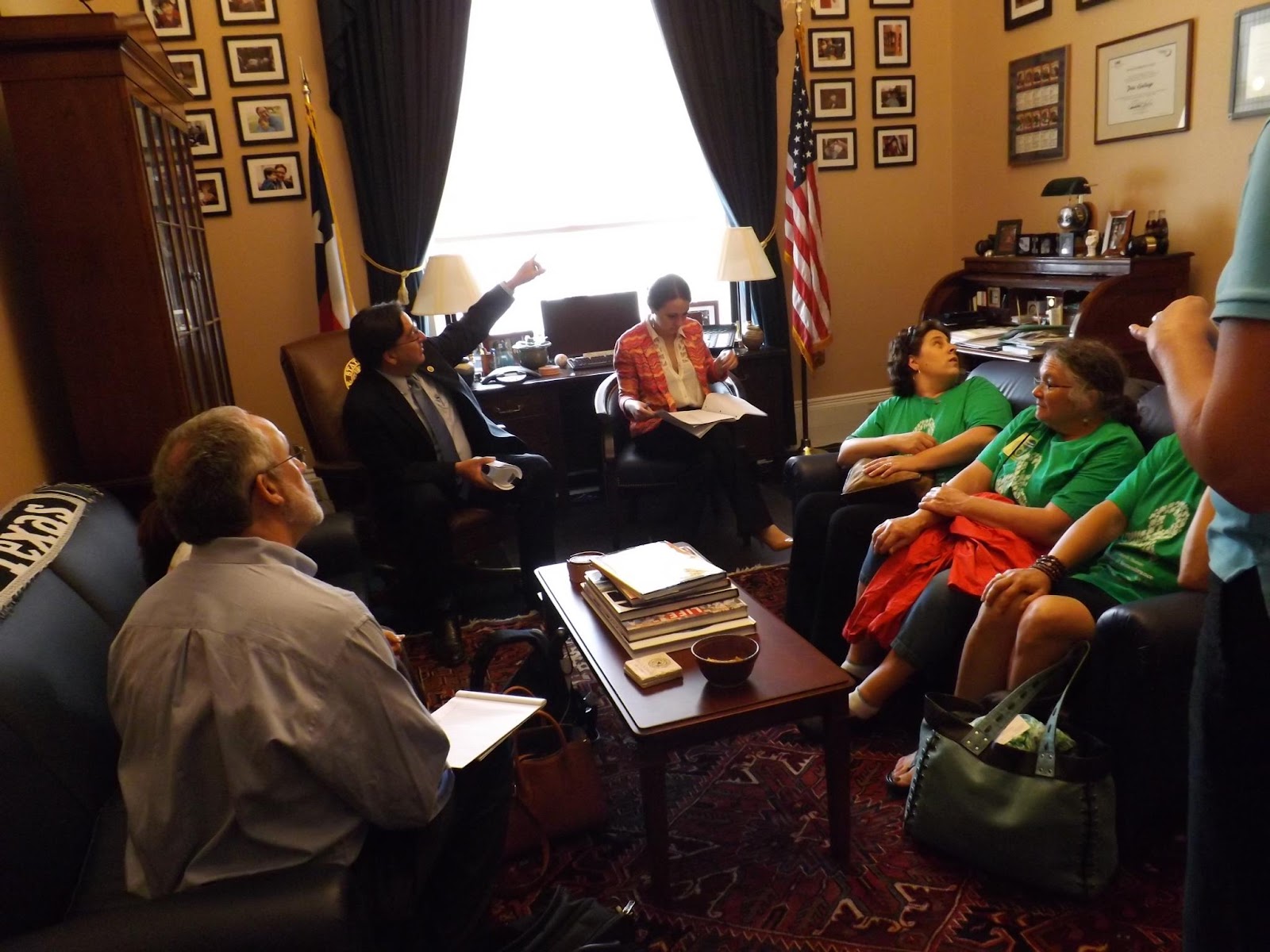 Hulgaard posted the photos on Facebook June 14, 2013 and made the photos viewable to anyone after we made our inquiries. By text, she told us she wasn’t sure if the meeting took place that day or simply later than the originally scheduled  9:45 a.m. June 13.

Hulgaard wrote: "Our group was able to spend a generous amount of time with Gallego. He was most endearing and helpful in gaining perspective about how politics work in Texas when it comes to gun violence and gun laws." Nikitchyuk separately told us that among the meeting attendees were "the brother of one teacher who lost her life and at least one survivor sibling."

Gallego, asked for his account, said by phone that the meeting singled out by Gutierrez wasn’t canceled; it was slightly postponed, he said. Gallego said he ultimately met with "eight to 10" members of the Alliance for "an hour, hour and a half," he estimated.

Gallego on changes to gun laws

He did not, according to the Post story, which quotes Nikitchyuk saying, "we clearly do not have his vote on supporting background checks at this time."

In 2018, she told us by phone that alliance members asked Gallego "where he stands." According to Nikitchyuk, Gallego responded, "Do you want to know where I stand or how I’ll vote? Because they’re not necessarily the same thing." He went on to tell the Alliance they "would need to change the hearts and minds of his constituents," Nikitchyuk said.

By phone, Gallego said he didn’t remember saying he wouldn’t support a bill mandating universal background checks, but did recall talking to the group about restoring a federal assault weapons ban. Nonetheless, Gallego said by text that he now believes "if you’re buying a weapon--whether at a store or at a gun show or through most private transactions, you should pass a background check."

We alerted Colin Strother, a political consultant to Gutierrez, of the indications that Gallego met with the alliance members; Strother stood by Gutierrez’s claim that Gallego had canceled such a meeting. By phone, Strother also noted that Gallego in Congress had an A-level rating from the National Rifle Association, which donated $1,000 to Gallego’s congressional campaign in 2014, federal filings show. Strother also told us Gutierrez supports universal background checks and a federal ban on assault weapons.

Gutierrez said Gallego as a U.S. House member "canceled a planned meeting with the families of Sandy Hook victims."

This claim proved factually incomplete. Interviews and photographs demonstrate that Gallego postponed yet held the meeting at issue. The gathering took place a few hours or possibly a day after it was originally penciled in.

Greg Abbott
stated on April 2, 2018 a campaign fundraising letter:
Says George Soros has "unloaded a whopping $1 million to install his liberal puppets in positions of power" in Texas this fall.

Julián Castro
stated on October 29, 2017 a conference call reported in a PJ Media web post:
Says a "recent analysis" showed that 91 percent of Deferred Action for Childhood Arrivals (DACA) recipients are employed, in school or serving in the military.