Robert Pittenger
stated on April 2, 2018 in a newsletter:
The omnibus bill "does not designate a single dollar for Planned Parenthood."

Emily Callen of Raleigh, center, along with other protesters with Planned Parenthood Votes, chant in Raleigh on October 1, 2014.

The recent federal spending bill has become a point of contention in the Republican primary for North Carolina’s 9th Congressional District seat.

Incumbent Rep. Robert Pittenger faces a challenge from Rev. Mark Harris, who lost the 2016 primary against Pittenger by only 134 votes. The duo has traded barbs over Pittenger’s voting record, whether Harris worked to stop Donald Trump from becoming president and now over the omnibus bill that Congress passed and Trump signed in March.

Harris thinks Pittenger should’ve opposed the bill since it didn’t fully fund a border wall, among other reasons. Pittenger, meanwhile, has touted its benefits.

One of the bill’s positives, Pittenger said in a recent newsletter, is that the bill "does not designate a single dollar for Planned Parenthood." 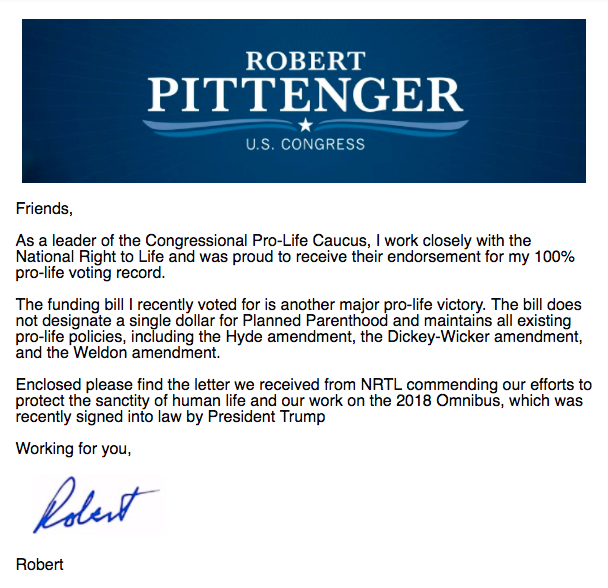 When asked about the newsletter, Pittenger’s staff pointed to a breakdown of the omnibus bill that was circulated by Rep. Cathy McMorris Rodgers, chair of the House Republican Conference.

Her summary of the bill, emailed to House Republicans, says "there has never been a line item for Planned Parenthood in the Labor, HHS, Education appropriations bill."

The group’s letter supports Pittenger’s claim that the bill doesn’t include any "line item" money specifically for Planned Parenthood. But, the NRL letter notes that Planned Parenthood affiliates "are able to tap into funds from the various long-standing health programs."

Indeed, recent estimates show that the organization about 40 percent of its funding from the government. Planned Parenthood receives more than $500 million in combined state and federal government funds.

Another portion can come through the government’s Title X Family program, which subsidizes birth control and tests for sexually-transmitted diseases. But Congress and President Donald Trump last year passed a law that allows states to withhold that funding for groups like Planned Parenthood. Pittenger voted for that law.

Lawrence Shaheen, a spokesman for the Pittenger campaign, argued that the newsletter isn’t deceptive because it included the National Right to Life letter explaining that Planned Parenthood still receives funding through other means.

Some tried to cut all funds

So the omnibus bill doesn’t end funding for Planned Parenthood, even if the health organization isn’t specifically mentioned as a funding recipient. But it wasn’t for a lack of trying by some Republicans in Congress.

Some House Republicans – including several from the House Freedom Caucus – tied their support for the spending bill to cutting federal funding to Planned Parenthood, according to Politico. However, the effort died largely because the bill wouldn’t garner enough support in the Senate to pass, according to Vox.

Pittenger said the spending bill "does not designate a single dollar for Planned Parenthood." Technically, in the very literal sense of the word "designate," Pittenger is right. The bill doesn’t specifically direct funding to Planned Parenthood by name.

But the federal government continues to pay for Planned Parenthood’s services through Medicaid and other programs. And since voters are more likely to care about whether their tax dollars go to an organization – not whether the organization is specifically named in legislation – we rate Pittenger's claim Half True. 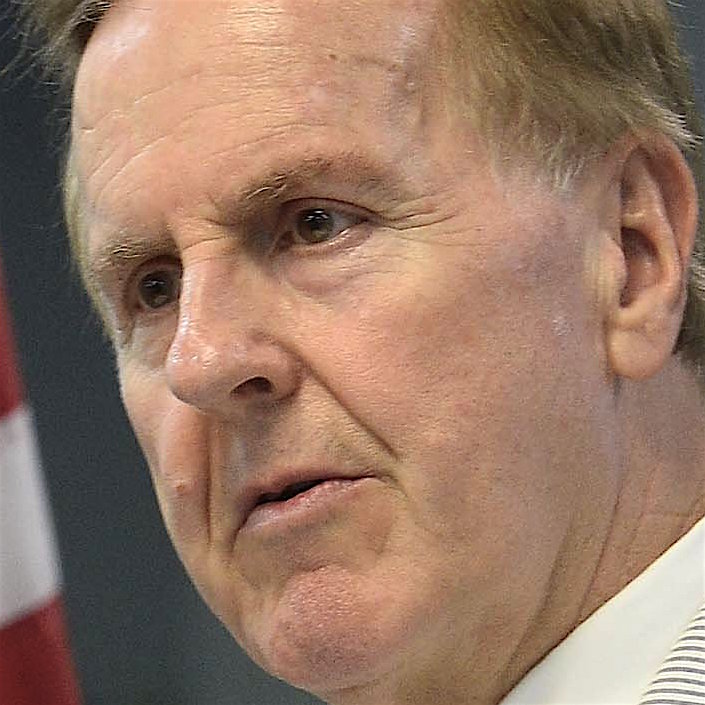