Dan Flynn
stated on September 13, 2016 in a letter to state health officials:
"Not one illness has been reported from raw milk in" Texas "in more than four years. A total of six illnesses have occurred in the last 20 years."

CORRECTION, 12:30 p.m., Sept. 30, 2016: After this fact check posted, Rep. Dan Flynn's office pointed out an error. We'd presented all national illnesses and deaths tied to food by the federal government as being linked to raw milk. We've now amended that sentence below to note only the illnesses and a death connected to raw milk. These changes didn't affect our rating of the claim.

At issue: Whether consumers may legally designate an agent to bring raw--meaning unpasteurized--milk from a farm to a pickup spot. State law says licensed producers may sell raw milk to retail customers where the milk is produced.

Our curiosity was stirred, though, by the legislators suggesting raw milk rarely poses a health risk. After all, pasteurization kills the bacteria responsible for diseases including typhoid fever, tuberculosis and diphtheria.

Still, the lawmakers said in their September 2016 letter to the Texas Department of State Health Services: "Not one illness has been reported from raw milk in our state in more than four years. A total of six illnesses have occurred in the last 20 years."

Do those counts hold up?

The letter, we determined, failed to account for up to 10 suspected illnesses in 2015 due to drinking raw milk. Before then, it appears, there were indeed a handful of identified illnesses.

When we asked the letter’s lead author, Rep. Dan Flynn, R-Van, how he reached his conclusion about no illnesses in more than four years and just six in 20 years, an aide, Kelli Linza, emailed us a chart citing the Centers for Disease Control and Prevention. The chart included an entry stating the agency confirmed two Texas illnesses, both in February 2000, traced to drinking unpasteurized milk. Linza later told us Flynn also recognized four 2011 cases of salmonellosis allegedly linked by State Health Services to raw milk from a North Texas dairy.

Next, we emailed the CDC about such Texas illnesses; spokeswoman Brittany Behm pointed us to its database of foodborne outbreaks enabling us to glean, clicks later, that from 2005 through 2015, Texas had two suspected outbreaks and seven illnesses (but no deaths) attributed to raw milk--all in March and April 2015.

Nationally in the decade-plus, the government tallied more than 421 illnesses and one death linked to raw milk, according to our database search.

Closer to home, we asked State Health Services about the frequency of illnesses tied to drinking raw milk. Spokesman Chris Van Deusen replied by email that in 2015, "raw milk was the suspected source of at least 10 reported cases of illness in Texas.

"As is frequently the case with foodborne illness investigations," his reply continued, "we weren’t able to test the milk consumed by the people who got sick, so we can’t say 100 percent definitively that raw milk was the cause. Often, by the time someone gets sick and an investigation occurs, the food has been eaten or discarded, so there’s no longer product available to test.

"Also, it’s worth noting that only a small percentage of foodborne illnesses are diagnosed and reported, so there may be additional cases out there that we don’t ever find out about," Van Deusen wrote.

We circled back to Flynn about the reported illnesses from 2015. By email, Linza expressed concern that the suspected 2015 instances of illness linked to raw milk that we found didn’t show up in what Flynn fetched from the CDC in July 2016.

Linza, asked whether Flynn asked State Health Services to tally raw-milk illnesses, said she didn’t remember doing so. Separately, Van Deusen affirmatively answered our inquiry about whether the count of 10 suspected 2015 illnesses linked to raw milk would have been available to anyone asking the agency about such illnesses in July 2016, which was when Flynn queried the CDC.

Nationally, we found in an online search, the Food and Drug Administration tallied 133 health incidents  from 1987 to September 2010 due to raw milk or raw milk products, accounting for 269 hospitalizations, three deaths, six stillbirths and two miscarriages. Also, CDC research published in 2012 found that "between 1993 and 2006, more than 1,500 people in the United States became sick from drinking raw milk or eating cheese made from raw milk."

Then again, a chart with the study says the identified outbreaks occurred in 25 states--with no outbreaks in Texas: 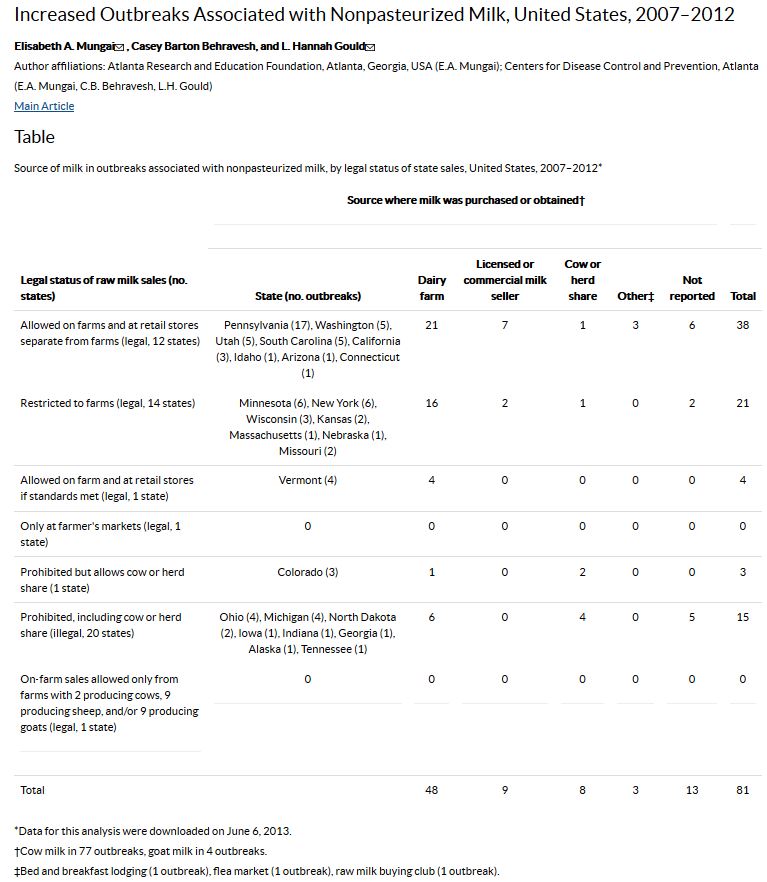 We also spotted a nongovernmental website funded by a Washington state law firm that represents food-poisoning victims. When we peeked, the site, realrawmilkfacts.com, had a chart itemizing 2,468 U.S. illnesses and two deaths from June 1998 through October 2013, all attributed to raw milk products. By phone, Bill Marler, managing partner for the Marler Clark law firm, told us the firm doesn’t have a hand in the figures, relying instead on California researchers.

In Texas, the chart indicates, four residents took ill with salmonella in November 2010 after ingesting raw cow milk from a farm store. In April 2011, Dallas County’s Health and Human Services Department said a 56-year-old resident had been hospitalized after drinking unpasteurized milk. The agency said that since November 2010, three other similar cases of illness linked to raw milk had been investigated by the state.

Previously, per the Real Raw Milk Facts chart, a June 2005 Texas outbreak involved a dozen residents who ate cheese made from raw milk. Before that, in February 2005, two Texas residents took ill from eating cheese made from raw milk, the chart indicates, with another 14 Texas illnesses attributed to raw milk in 2000 and 2003 (when one person died).

Flynn wrote: "Not one illness has been reported from raw milk in" Texas "in more than four years. A total of six illnesses have occurred in the last 20 years."

Government counts suggest raw milk only rarely touched off illnesses in Texas over those decades. However, Flynn presented an incomplete too-low count, failing to note seven to 10 illnesses tied to raw milk that reportedly occurred in Texas last year.

We rate his claim Mostly False.

MOSTLY FALSE – The statement contains an element of truth but ignores critical facts that would give a different impression. Click here for more on the six PolitiFact ratings and how we select facts to check.