A new National Republican Senatorial Committee television ad (in both English and Spanish) blames the former state attorney general for increases in crime during her time in office.

The ad seeks to undercut part of Cortez Masto’s résumé that her Senate campaign relies on, invoking her tough-on-crime record in tv ads and referring to herself as the state’s former "top law enforcement officer."

The numbers are technically accurate, but the ad fails to prove what Cortez Masto had to do with them.

The claims about increased mayhem trace back to a 2014 report of state crime numbers over the last decade, which overlaps with Cortez Masto’s eight years in the Attorney General’s office.

Cortez Masto’s campaign said focusing on the back half of her tenure as attorney general was misleading, and that crime actually went down during her time in office.

Total crime decreased from Cortez Masto’s first year in office (116,814) to her last (92,376), and most major reported crimes with the exception of rape decreased over that eight-year period. (A spreadsheet of the cited crime figure is here) 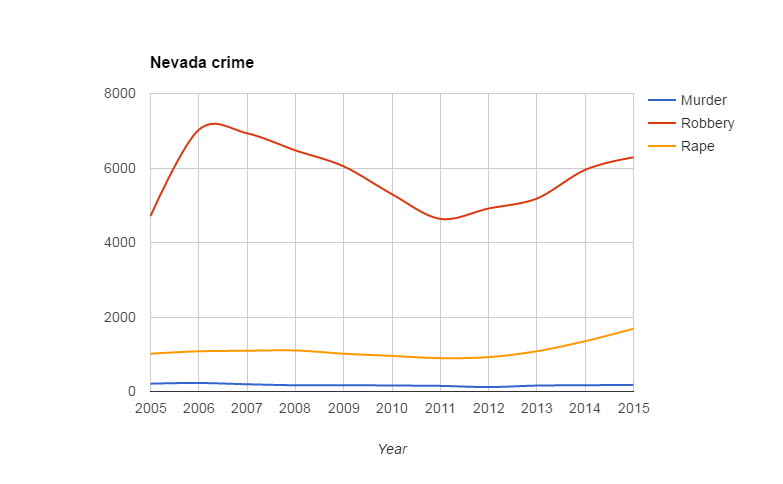 Bill Sousa, director of UNLV’s Center for Crime and Justice Policy, cautioned that criminologists should take heed of any crime upticks. However, he said, year-to-year crime statistics can be unreliably "volatile."

"In terms of a couple of decades, a few years looking up isn’t evidence of a general trend," he said.

The increase in reported rape is concerning, but there may be another explanation — the FBI broadened its definition of rape in 2012 (read more about the revision here). The bureau’s Uniform Crime Report saw subsequent increases in reported rape both nationally and in Nevada.

Reported accounts of rape in Nevada have increased since the change in definitions, which was previously defined as "carnal knowledge of a female forcibly and against her will."

Plus, these figures only count the total crimes committed and aren’t adjusted for the roughly 300,000 population increase during Cortez Masto’s term.

Facebook posts
stated on February 26, 2023 in a post
The officers who beat Tyre Nichols targeted him because he was “allegedly dating” one of their wives.

"If you could somehow control for tourism population, I’d expect that Nevada would drop on that list," Sousa said.

NRSC spokesman Greg Blair said in an email that the ad focused on Cortez Masto’s second term to highlight her apparent political ambition outweighing other duties.

That’s a serious charge, and there’s no concrete proof she had anything to do with the decline in crime in her first term or the subsequent increase in her second.

The crime report itself cautions police agencies against drawing any conclusions about a specific department given the variety of factors that can affect crime trends.

"Because of other assigned duties, the peculiar cycle of crime and clearances, and different community factors that normally affect crime statistics, no conclusions regarding individual departments should be made without consulting directly with the agency being analyzed," the report states.

"I cannot even begin to imagine how states' attorneys general have much influence over crime rates," he said in an email. "I suppose some might think that an AG who establishes a culture of harsh prosecution and various law enforcement initiatives will theoretically deter future crime ... but the kind of data to establish such a link is just impossible to generate."

Sousa said state-level crime policy is important, but changes in the raw numbers are more reliant on policing in individual neighborhoods and precincts.

"A lot of what we know about crime occurs at a local level," Sousa said. "It points to the idea that what state-level policies do can have influence, can have an impact, but the impact is minimal."

Similarly, there is some truth that Nevada took the third spot in a ranking of the 10 most dangerous states. Again, however, it’s not proven what Cortez Masto had to do with it, and the source is not as credible as the FBI.

The NRSC cites a list published in January 2015 from 24/7 Wall Street, a website that covers financial news. The list indeed ranks Nevada third, but the data relies on both crime data and socioeconomic factors, such as the poverty rate and the percentage of adults with a high school diploma.

No attorneys general, in Nevada or elsewhere, play much of a role in setting educational policy or promoting programs to get people out of poverty.

Other rankings of dangerous states are somewhat of a mixed bag, mainly due to differing methodology. Another list by Law Street called Nevada the second most dangerous state, but that blog based the ranking on violent crimes per 100,000 people.

Another ranking from WalletHub puts Nevada as ninth most dangerous of 51 states (including Washington, D.C.) but with a more involved methodology than other surveys.

Spivak said reading into the rankings to determine which states were dangerous is "utterly absurd," given variances in methodology and no standardization or weighted use of crime or socioeconomic indicators.

The NRSC ad says Nevada was ranked as the third most dangerous state by the time Cortez Masto left office, and that "murder went up 11 percent, robbery went up 28 percent, rape 51 percent" during her second term.

The NRSC cherry-picks a handful of short-term crime statistics to portray Cortez Masto as weak on crime enforcement. But the argument is flawed.

Experts agree that crime statistics are a crude way to measure safety, and Nevada has several quirks that inflate the numbers.

The ad claims that Cortez Masto "couldn’t keep us safe," but crime statistics have more to do with local law enforcement agencies than the state's attorney general. The NRSC offers no proven link connecting her actions as attorney general to a swing in murder, robbery and rape.

The statement contains an element of truth but leaves out important details. We rate the statement Mostly False.

Donald Trump
stated on October 30, 2016 a campaign speech.:
Says Nevadans will have a "double-digit hike in their Obamacare premiums for the year" and "10 of Nevada’s 16 counties will only have one Obamacare...exchange insurer"

Hillary Clinton
stated on October 19, 2016 the third 2016 presidential debate:
"What the District of Columbia was trying to do (with its handgun ban) was to protect toddlers from guns."

Lesley Cohen
stated on September 24, 2016 a political mail piece.:
"It’s bad enough that (Stephen) Silberkraus appeared in a sexual fetish film where women were kidnapped from their homes and forced to live naked in kennels and trained to be pets. But when Silberkraus isn’t acting in films that degrade women, he’s stalking them in his personal time."

Catherine Cortez Masto
stated on August 29, 2016 a television ad:
Says "Joe Heck voted 10 times to defund Planned Parenthood ... and Heck opposes a woman's right to choose, even when her health is at risk."

Jacky Rosen
stated on May 25, 2016 in an interview.:
On the Iran nuclear deal

AFSCME
stated on August 10, 2016 a television ad:
"In Washington, Congressman Joe Heck supports privatizing (Social Security), turning our savings over to Wall Street and risking it on the stock market."

Jacky Rosen
stated on July 20, 2016 a press release.:
Says "Danny Tarkanian … wants to defund Planned Parenthood and would outlaw a woman's right to choose, even in cases of rape or incest."

Catherine Cortez Masto
stated on July 14, 2016 a news release:
"Just on the issue of immigration alone, it is next to impossible to find a policy difference between (Donald) Trump and Congressman (Joe) Heck."