Vermont Sen. Bernie Sanders and former Secretary of State Hillary Clinton share a light-hearted moment at the end of the first Democratic debate in Las Vegas on Oct. 13, 2015. (Getty)

A conspiracy theory rattled the Bernieverse soon after many media outlets, including CNN, pronounced Hillary Clinton the winner of the first Democratic presidential debate.

Some of Sen. Bernie Sanders’ supporters said no, Sanders was the clear winner, evidenced by a CNN poll that showed most people thought Sanders was best.

The problem: CNN deleted the poll.

The theory: CNN deleted the poll to so as not to counter its narrative that Clinton won.

A video by NowThis, which shares GIFs and video stories by social media, picked up on a Reddit theory and promoted this video on Twitter and Facebook, teasing, "It looks like CNN is trying to help Hillary look good, even if that means deleting polls."

Here’s part of the script that was seen by millions: "The Internet thinks Bernie Sanders totally won the debate. But CNN thinks Hillary won. Even though CNN’s own polls say Bernie won by 68 percent. But that doesn’t concern them. They allegedly just deleted the polls."

The video suggests CNN "deleted the polls" showing Sanders won because CNN’s parent company, Time Warner, is "one of Hillary’s biggest donors," spending more on her campaign than "Bernie’s top 15 donors gave him."

This is just one example of a viral claim.

For now, we will skip the part about the conspiracy that focuses on Time Warner’s campaign donations, because there’s a fundamental flaw with these posts.

The original link does not appear to be working on some mobile devices. Try this link if you are having problems with the links above. It should take you to a log-in screen and then show the poll, which has closed.

CNN’s digital team used a Facebook app to run live polls of users about what they thought of the debate as it was happening.

Ari Melber
stated on November 18, 2013 in a talk on MSNBC's "The Cycle"
Says Barack Obama’s approval rating "is right in the average" for second-term presidents at this point.

CNN anchor Don Lemon reported on the strong show of support for Sanders from CNN’s Facebook Lounge on debate night. 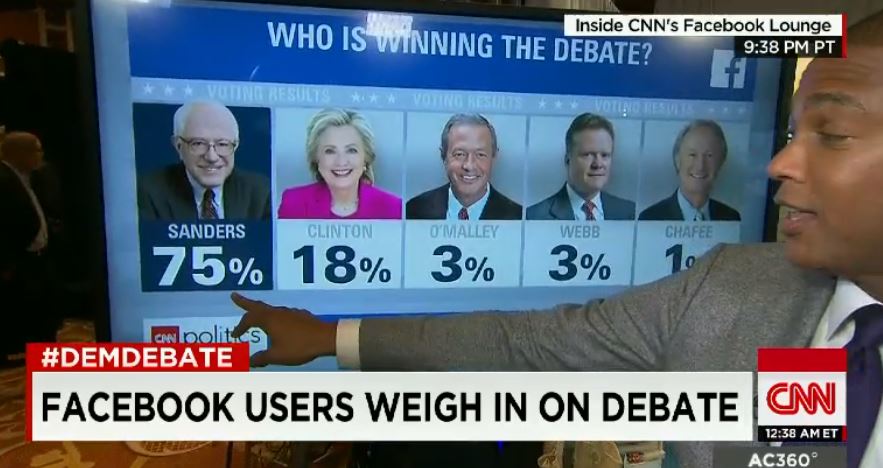 So not only did CNN not delete the poll, but the news channel also did not hide it.

It might be obvious, but these are clearly non-scientific polls.

NowThis attempted to correct its report on Facebook by posting this update on the video’s comment stream: "Clarification: This was an unofficial social media user poll, and CNN says it's still live on their web site and Facebook page."

But again, you don't have to take CNN's word for it that the post wasn't deleted, and NowThis can't hide behind the use of the word allegedly. The poll is here for anyone to see. Here's a screengrab we took Oct. 19: 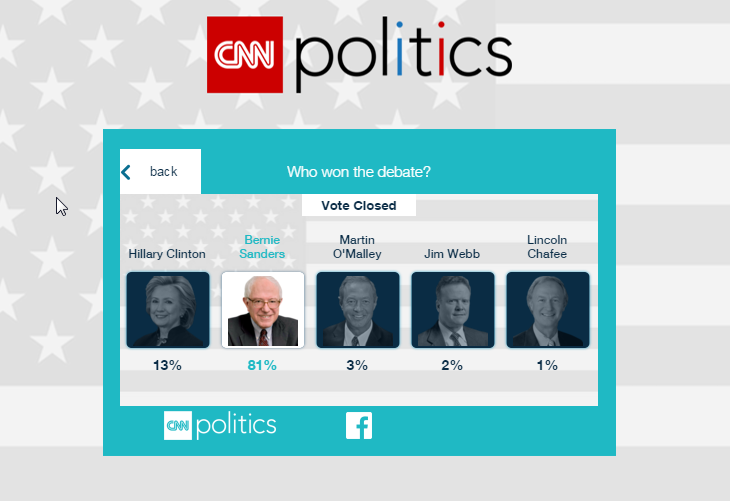 Sanders supporters are free to disagree with analysis by journalists and pundits of who won the Democratic debate.

What isn’t up for debate, however, is the fact that CNN did not delete its poll of Facebook users, who overwhelmingly said Sanders won the debate. It’s still on a Facebook page managed by CNN.

We rate the claim Pants on Fire.

We've updated this fact-check to account for some of the issues we've heard from users about opening the links. Some of our links were not working on some readers' mobile devices.