Ari Melber
stated on November 18, 2013 in a talk on MSNBC's "The Cycle":
Says Barack Obama’s approval rating "is right in the average" for second-term presidents at this point.

President Barack Obama’s job approval rating took a hit in the first few weeks of November amid a heap of controversy over implementation of the Affordable Care Act.

But to hear the folks on MSNBC tell it, Obama’s poll numbers are par for the course for presidents in their second term.

Ari Melber, co-host of MSNBC’s The Cycle, said during a segment on the show Monday that Obama’s approval rating isn’t so far off of some second-term presidents.

"As to the approval numbers, it’s very important to understand, we look at Gallup over the entire history of second-term presidents, and you’ve got in the 40s this president," Melber said. "At the same point, 1,700 days or so in, that’s exactly about where (George) W. Bush was, it’s where LBJ (Lyndon B. Johnson) was. (Bill) Clinton was higher because he was a very popular second-termer.

"But this notion that this is really bad or worse for Obama, it’s actually right in the average, and if anything impressive because we’re in such a super polarized time period."

He spoke over a bar chart showing approval ratings of the presidents he mentioned "about 1,750 days" into their second term. Here’s a screenshot: 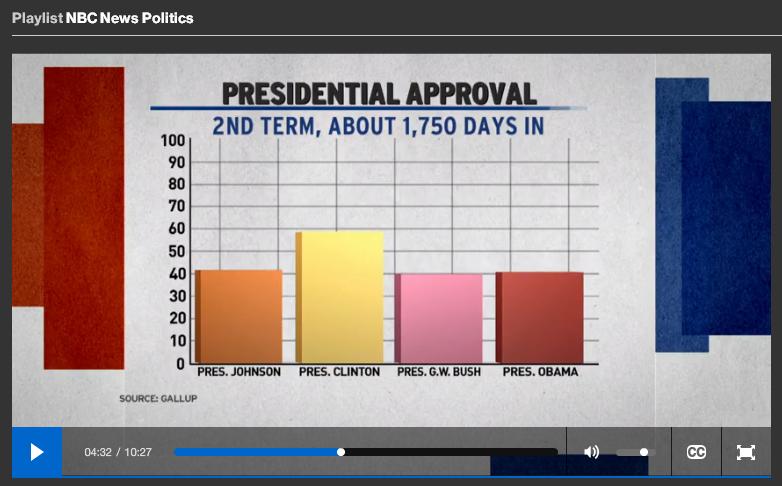 Intrigued by his point, we looked into it.

In an interview with PunditFact, Melber told us he used data from Gallup’s Presidential Job Approval Center, an interactive tool that allows users to compare Gallup approval ratings of each president since President Harry Truman (1945-53) at various points in office.

Melber isolated Johnson, Clinton, George W. Bush and Obama. For all but Johnson, the 1,750th or so day falls around the first full week of November. (Johnson’s 1,750th day does not fall around the same time because he finished out Kennedy’s term before being re-elected, so his comparable rating is from September 1968, just months before he left office.)

Melber said he chose to compare those presidents because Bush is recent and the others are Democratic two-termers.

Even by this narrow comparison, it’s not accurate to say Obama’s poll numbers are "right in the average." But we’re not sure viewers would think Melber was comparing Obama with just three other presidents -- particularly when he said "over the entire history of second-term presidents."

If you expand the pool, how does Melber’s claim stand up? (Gallup’s polling goes back to Harry S. Truman.)

Approval rating for presidents in their 1,750th day in office

So the overall average approval rating for those presidents, under Melber’s metric, is about 47 percent -- 6 percentage points higher than Obama.

Another way to look at the data

Gallup editor in chief Frank Newport said there’s no right way to compare the approval ratings, but he would use a different method. He looked at the monthly average of polls for presidents in the first November of their second term. He argued this way smooths out weekly blips, and offers a more accurate portrayal of Truman and Johnson, who shared first terms with predecessors who died in office.

Comparing by the number of days served puts Johnson well into his second term in September 1968, when his approval rating began to sour over the Vietnam War, Newport said.

That exaggerates the disparity. Using Newport’s methodology, second-term presidents had an average approval rating of about 51 percent.

Karlyn Bowman, a senior fellow at the conservative American Enterprise Institute, said Melber is correct about one thing: This is one of the most polarized eras in American history.

"Sometimes it seems to me that the American people are living in different countries, or different universes," she said. "Republicans and Democrats have completely different impressions."

Bowman also would have gone about the comparison in a different way, starting by including Reagan over Johnson, and by looking at different polls, too. (A CBS News poll released Wednesday, after Melber’s segment, put his approval rating at 37 percent. Gallup’s three-day rolling average for Nov. 17-19 was down to 40 percent.) She said the political climate was so different in Truman and Eisenhower’s time that she, like Melber, would have left them out. She empathized with Melber trying to make a point in a tight crunch on television.

"People pick and choose polling data they want to highlight," Bowman said. "I think he should have been more precise in his wording, but I’m not gonna give him darts and arrows for this kind of thing."

Melber said: "As to the approval numbers, it’s very important to understand, we look at Gallup over the entire history of second-term presidents, and you’ve got in the 40s this president. At the same point, 1,700 days or so in, that’s exactly about where (George) W. Bush was, it’s where LBJ (Lyndon B. Johnson) was. (Bill) Clinton was higher because he was a very popular second-termer." Depending on what presidents you pick, and how you gauge the time frame, Melber comes close. Obama’s approval ratings are roughly in the range of some presidents.

But looking at the numbers other ways produce vastly different results.

Melber’s claim is partially accurate but take things out of context. We rate it Half True.