That’s a message circulating on Facebook recently, promoted by the "Bill Maher Fanpage." A reader asked us to check it out.

The quote comes from the Oct. 2 episode of Real Time with Bill Maher, where Maher discussed Turing Pharmaceuticals, the company that jacked up the cost of a life-saving drug from $13.50 to $750 essentially overnight.

"Not that (Turing CEO Martin) Shkreli is unusual for the pharmaceutical industry," Maher said on his show. "Fifteen years ago, cancer drugs cost an average of $10,000 a year. Now it’s $10,000 a month because this cartel owns the U.S. government every bit as much as Mexican drug lords own theirs."

It’s well known that the cost of health care is on the rise, but has the annual cost of cancer drugs really increased so dramatically in just a decade and a half?

Maher’s team sent us links to some news articles about the rising cost of cancer drugs, and we tracked down information that speaks to his claim.

The best information we could nail down is the cost of anticancer drugs at launch, the initial price when the Federal Drug Administration approves a drug.

These are the sticker prices set by the pharmaceutical companies, not the prices patients actually pay out of pocket, which are reduced by insurance payments, patient assistance programs and other discounts. Costs increases, though, are often passed on to consumers.

Maher has a point that cancer drug costs are on the rise. We charted the launch costs of cancer drugs the FDA approved since 1999, using a list compiled by Memorial Sloan Kettering Cancer Center. 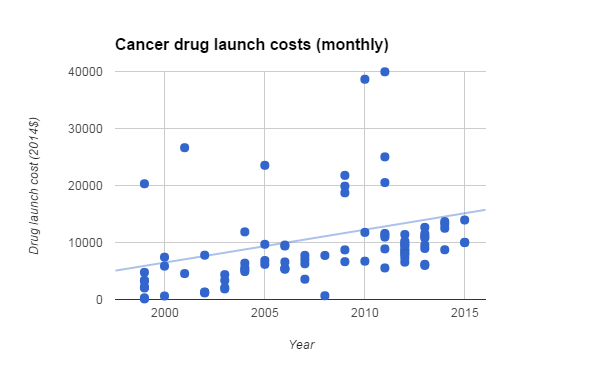 Because many cancer drugs are not administered to patients for a full year, it’s difficult to determine an average annual cost, so the first half of Maher’s statement -- that they cost about $10,000 a year 15 years ago -- is hard to nail down. To his point, though, the monthly cost of a new drug was dramatically lower in 2000 than what it is now at about $4,634.

One of the news articles that Maher’s team sent us is an academic article in the Journal of Oncology Practice that supports his statement. The report reads, "The average cancer drug price for approximately one year of therapy or a total treatment duration was less than $10,000 before 2000."

Maher’s statement is "in the ballpark," if not an understatement, said Rena Conti, a health economist at the University of Chicago who researches cancer drug prices.

In a 2015 paper Conti authored with three other leading health economists, she examined the launch cost of anticancer drugs controlled for inflation and the benefit to the patient (how much it prolongs life expectancy). For example, in 1995, anticancer drugs cost $54,100 for an additional year of life, the study found. In 2005, drugs cost $139,100 for the same benefit, and the price grew to $207,000 in 2013.

In the United States, pharmaceutical companies set their own drug prices. What’s pushing them to increase the costs?

It’s not necessarily that cancer drugs are getting better and are thus worth more. Conti’s research concluded that just about one-fifth of the cancer drug cost increase can be attributed to a better product.

There are two primary forces behind annual cancer drug cost increases, Conti said: First, pharmaceutical companies estimate a "zone of indifference" -- based on last year’s prices, how much more would buyers be willing to pay? Second, rebates and discounts for drugs have also increased over time, and this creates an incentive for drug companies to increase their costs alongside the discounts.

Because there’s no formal price regulation and competition in the industry is rare, "It really is a system where there’s no downward pressure on drug prices," said Peter Bach, director of the Memorial Sloan Kettering Center for Health Policy and Outcomes in an interview with Fortune.

The average annual cost of a drug isn’t easy to calculate, given the way cancer drugs are scheduled; many drugs aren’t used every month for an entire year. So the first half of the statement is hard to verify, though we did find one academic source that cites a similar figure.

However, Maher has a point that the cost of cancer drugs has increased dramatically since 2000, when the average monthly price of a cancer drug, when it first hit the market, was about $4,600. In 2015, the monthly cost is over $10,000.

Maher’s numbers are a little squishy, but they’re in the ballpark. We rate his claim Mostly True.

Journal of Economic Perspectives, "Pricing in the Market for Anticancer Drugs," Winter 2015

IMS Institute for Healthcare Informatics, "Innovation in cancer care and implications for health systems," May 2014