Citizens Against Rail Taxes
stated on October 8, 2014 in a radio ad:
None of $400 million the City of Austin proposes to spend on road projects "will be used to add new lanes to congested roadways."

Perhaps you’ve heard: The City of Austin promises that if voters sign off on a rail proposition, $400 million in city-issued debt will separately flow to road projects in the traffic-glutted capital. The city says on a web page describing its proposition on the November 2014 ballot the "roadway improvement projects are designed to relieve congestion, enhance mobility and manage traffic in nine "corridors" including Interstate 35.

Hold your applause, one group says. In a radio ad, a narrator for Citizens Against Rail Taxes says the rail part of the plan won’t relieve congestion. "And the $400 million the city is promising us for road projects?" the narrator says. "Guess how much of that money will be used to add new lanes to our congested roadways. None. Zero."

By phone, Jim Skaggs, the group’s treasurer, pointed out the ad specifies no new lanes on the city’s "congested" roads. That was a wave, he said, at the routinely clogged MoPac Boulevard, I-35 and U.S. 183. "There’s some frontage road stuff" in the proposal, Skaggs said. "But they’re not adding any lane-miles to our really crowded highways," he said.

When we inquired, officials for the city and Texas Department of Transportation each said that contrary to the claim, the described $400 million would result in about 15 miles of new or extended lanes or what engineers call lane-miles, which is a calculation of area based on how much pavement is added, perhaps not always what a motorist thinks of when he or she imagines fresh pavement.

Specifically, city spokeswoman Samantha Alexander said, some of the promised spending would go to projects related to easing access to and from I-35 just south of Lady Bird Lake and there also would be projects related to Texas 71 -- plus a single new lane on part of FM 1826 in Southwest Austin, among examples.

The 2014 Austin Strategic Mobility Plan, adopted by the Austin City Council in June 2014, has a chart summarizing how $400 million might be spent: 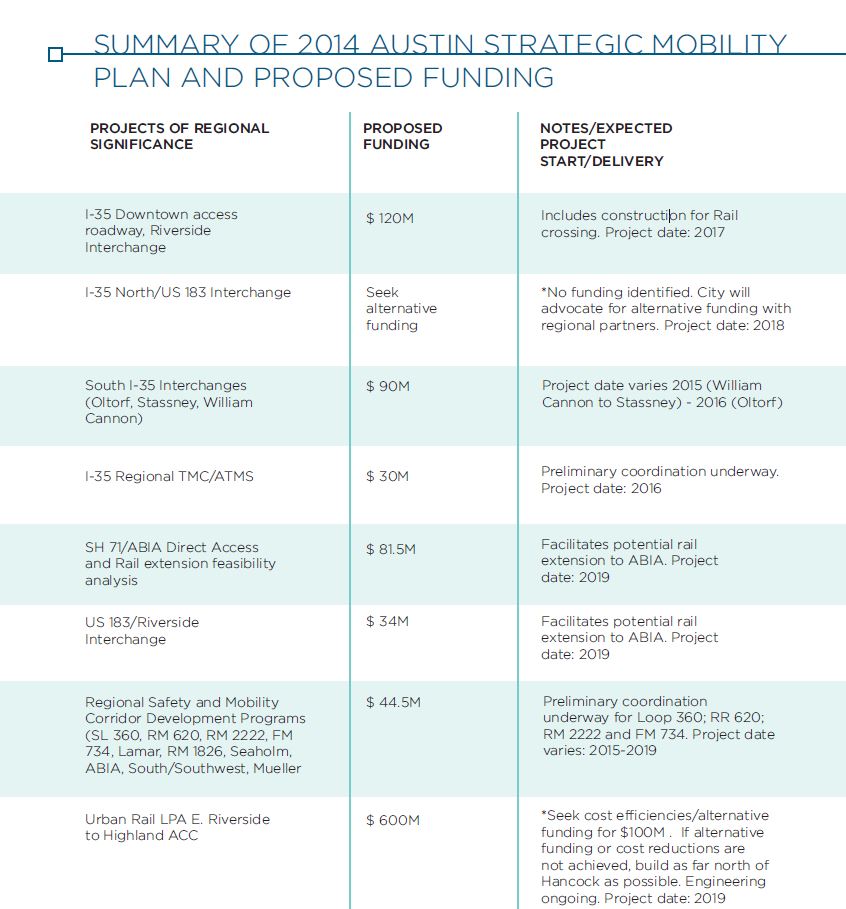 We asked TxDOT to illuminate details. By email, spokeswoman Kelli Reyna provided a breakdown indicating 10.5 miles of the lane-miles would be adjacent to I-35 near Riverside Drive, Oltorf Street or William Cannon Drive.

At first, we got the impression most of these projects, costing around $200 million, would simply expand frontage roads or lanes designed to ease traffic more quickly from the highway to city streets. By phone, Steve Miller, a consultant to TxDOT on the I-35 projects, counseled otherwise.

About seven of the additional lane-miles Miller spelled out include:

--Two added lanes, one northbound and one southbound, making it possible for drivers to enter and leave I-35 without facing the traffic signal on Riverside;

--A lane added, on southbound and northbound I-35, between the exit and entry ramps under Oltorf, easing traffic off and on the highway in both directions plus a lane added in each direction making it easier to get to and from Ben White Boulevard from Oltorf;

--Lanes added easing the flow of traffic from the Ben White southbound direct connectors -- or flyover -- south past William Cannon and an additional lane going north from south of Stassney Lane to the flyover that reaches Ben White. Also in both directions, lanes would be added to ease traffic from exit and entry ramps to and from East Stassney Lane and William Cannon.

The TxDOT breakdown also indicates about 3.9 lane-miles would be added off of U.S. 183 and Texas 71 to improve the flow of traffic heading east toward the Austin airport.

Finally, the  breakdown says, a mile-long lane would be added to FM 1826 in Southwest Austin. According to an Oct. 4, 2014, Austin American-Statesman news story,  this lane would be added between Slaughter Lane and U.S. 290. Terry McCoy, TxDOT’s deputy district engineer for the Austin office, said the ultimate plan is to build four lanes, with a median or left-turn lane in the middle, but the city money might be enough for only an interim three-lane version.

We shared the TxDOT breakdown with Skaggs, who said the intended projects don’t attack major congested roadways. "They are frontage-road connections, intersection overpasses and connectors to 71 and 183 at the airport which," Skaggs said by email, "are not congestion priorities."

For another perspective, we turned to the Transportation Policy Research Center, part of the Texas Transportation Institute at Texas A&M University. By email, the center’s director, Ginger Goodin, called lane-miles a legitimate measure of cumulative improvements before saying she sees the projects that would be funded by the $400 million as adding lanes and relieving congestion.

Goodin noted the portion of I-35 between U.S. 290 and Texas 71 ranks No. 2 on the state’s list of 100 most-congested roadways. Goodin said, too, the described projects -- including so-called collector-distributor roads, auxiliary lanes and intersection improvements -- are accepted congestion-reducing strategies recognized by the institute.

Overall, Goodin called the statement by Citizens Against Rail Taxes "misleading. A portion of the funding will go toward adding lanes to IH-35, the most congested roadway in the region," Goodin said.

Citizens Against Rail Taxes said none of $400 million the City of Austin proposes to spend on road projects "will be used to add new lanes to congested roadways."

There are other ways to say that six-lane I-35 won’t become a 10-lane highway under the $400 million plan. But Citizens Against Rail Taxes’ radio ad relies on all-or-nothing wording that ignores the miles of new roadway to be built with the money, much of it intended to relieve congestion in notorious trouble spots.

This statement is not accurate. We rate it False.

CLARIFICATIONS, 10:30 a.m., Oct. 23, 2014 and 12:45 p.m., Oct. 27, 2014: Part of this story was amended to clarify specifics about what lanes would be added near and on I-35 under the city's plans should voters approve the proposition We later added the detail about the cost of the described projects being about $200 million. These changes didn't affect our rating of the claim.