Republican Party of Texas
stated on April 11, 2014 in a tweet and chart:
"Wendy Davis has already taken more $ from teacher unions than the past 3 Democrat gubernatorial candidates combined."

Teacher groups often back Democrats for office; it shouldn’t be a surprise Wendy Davis has such support. 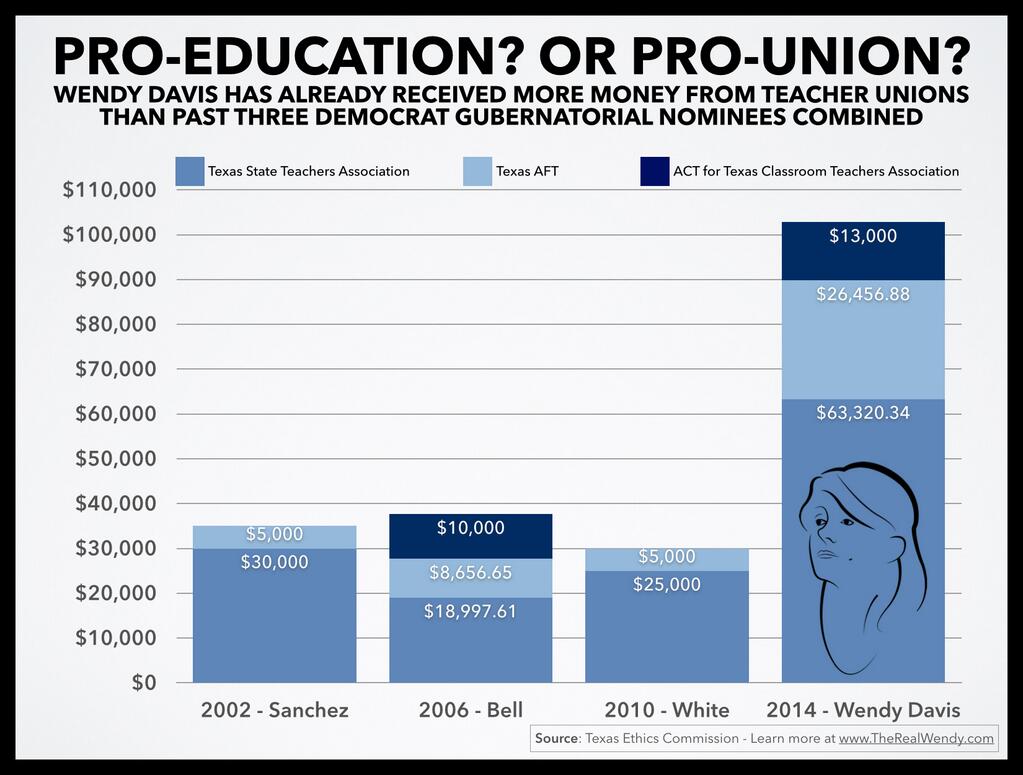 By the group’s math, Davis has drawn $102,777 from the three teacher groups, while the previous three Democratic nominees for governor combined to attract $102,700.

Republican Party of Texa administrator Beth Cubriel told us by email the figures were based on contribution and expenditure reports filed at the Texas Ethics Commission. She added that the figures reflect all contributions by the teacher groups to the candidates — not just contributions made while each one was running for governor.

But labels on the chart — "2006 Bell" and "2014 Wendy Davis," for example — left us with a different impression. One might not expect that previous campaigns for other offices would be included in those contribution totals.

We looked next at how much each candidate drew from the singled-out groups while running for governor.

By our calculations, Davis garnered about $67,000 of her contributions from the groups for her two tightly-contested Senate campaigns with about $36,000 coming in since she declared for governor Oct. 3, 2013.

Likewise, Bell in 2006 drew no donations from the groups during his run for governor; his nearly $40,000 came during his 2008 campaign for a Texas Senate seat. By contrast, the teacher contributions to Sanchez in 2002 and White in 2010 were specifically for gubernatorial campaigns.

By email, Cubriel said our breakdown succinctly covers "what didn't fit into the four corners" of the party's chart. The party "never claimed the money was given to her gov(ernor) campaign directly," she said. "The years on the chart are to serve as a reminder of when each candidate was the nominee."

We told Cubriel that our review of campaign-finance reports turned up a sizable contribution not included in the party’s critique--$125,000 gained by Davis’s gubernatorial kitty on Jan. 15, 2014, from the Washington, D.C.-based American Federation of Teachers Committee on Political Education. Cubriel said by phone that party researchers didn’t search records for that group. "That makes the case against her even worse," she said.

The tweet and chart turned out to mislead. Most of the cited teacher groups’ giving to Davis came during her campaigns for state Senate, not during her run for governor. Running for governor, Davis has attracted about $36,000 from two of the groups and nothing from the third. That total trails the $65,000 combined raised by two of the previous nominees in their respective gubernatorial bids.

Regardless, the claim has an element of truth. With career fund-raising factored in, Davis has topped the three previous Democratic gubernatorial nominees in support from the groups. Moreover, the party didn't mention a 2014 donation of $125,000 to Davis's campaign from a major teacher group.

We rate this claim as Mostly False.