Dick Cheney
stated on June 22, 2014 in comments on ABC's "This Week":
"The number of terrorists out there" has doubled.

Dick Cheney said that "the number of terrorists out there" has doubled and that President Barack Obama said when "we got bin Laden, terrorism problem solved."

While the focus is currently on Iraq and the growing prominence of ISIS, Cheney said Obama’s miscues are broader and potentially dangerous. One statistic that he said supported his point: The sharp rise in the number of terrorists operating worldwide.

"We’ve got a much bigger problem than just the current crisis in Iraq," Cheney said. "The Rand Corporation was out in the last week with a report that showed that there’s been a 58 percent increase in the number of groups like al-Qaida, Salafi-jihadists, and it stretches from West Africa, all across North Africa, East Africa, through the Middle East, all the way around to Indonesia -- a doubling of the number of terrorists out there."

In other words, he said we’ve got "a hell of a problem."

PunditFact wanted to look into Cheney’s point about the stark rise in the number of terrorists in groups like al-Qaida in recent years.

His claim is nearly verbatim the findings of a report released June 2014 and prepared for the Secretary of Defense by the Rand Corporation, a nonpartisan think tank whose work is cited by Democrats and Republicans. The report focused on Salafi-jihadist groups, which are a specific category of militant Sunni Islamists marked by their emphasis on reclaiming a "pure" Islam and the belief that violent jihad is required as part of religious duty. The report focused on these groups because most deem the United States an enemy and are willing to kill civilians on a large scale.

The findings in the report are based on publicly available documents, such as internal memos, statements and other writings obtained from al-Qaida and other leaders by counterterrorism groups and news organizations like the Associated Press.

Members of al-Qaida are an example of Salafi-jihadists, but not all jihadists are considered as part of al-Qaida or as formal members of its affiliates. The group taking over cities in Iraq, ISIS, is no longer part of al-Qaida after leader Ayman al-Zawahiri dismissed them in January 2014.

Other groups in Africa, Asia, the Middle East and the Caucuses may occasionally work with or are allied with al-Qaida but are not members, such as Boko Haram in Nigeria, which gained worldwide infamy for kidnapping about 250 Nigerian schoolgirls. Still, others operate as lone wolves inspired by the movement, such as Maj. Nidal Malik Hasan, who shot and killed 13 people in an attack at Fort Hood, Texas, in 2009, and the Tsaernev brothers who executed the 2013 Boston Marathon bombings.

The report did not include other groups trying to build an Islamic state and presenting a threat to the United States and its interests, such as the Muslim Brotherhood, Taliban and Hezbollah, whose religious views are sometimes contradictory to Salafi-jihadists.

All that said, the number of Salafi-jihadist groups (al-Qaida, its affiliates, other violent Islamists) jumped 58 percent, as Cheney said, from 31 groups in 2010 to 49 in 2013. The growth primarily happened in North Africa and countries along the Mediterranean Sea, known as the Levant, which includes Syria, Iraq, Jordan, Palestine, Cyprus, Lebanon and Israel.

Figuring out how many jihadist fighters that amounts to is tricky, as the groups don’t report their membership and their numbers can fluctuate. Still, the report says the population of fighters more than doubled between 2010 and 2013 looking at estimates both low (under 20,000 fighters to more than 40,000) and high (about 50,000 to more than 100,000).

Facebook posts
stated on September 11, 2022 in a photo on Facebook
Says of 9/11, “Two planes can’t cause three buildings to collapse in free-fall time.” 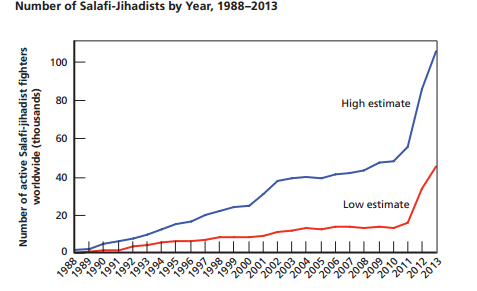 The biggest increase was in Syria amid the rebellion to the regime of Bashar al-Assad. Further, Libya is "perhaps the most active Salafi-jihadist sanctuary in North Africa" as a result of groups forming after the killing of its longtime leader, Muammar Qaddafi, wrote Seth Jones, the author of the report and director of Rand’s International Security and Defense Policy Center.

Membership has flourished partially because of weak governments in the Middle East and Africa, which not surprisingly has led to more attacks in recent years. Most, though, have been directed locally and not toward the U.S., its embassies or allies. There were roughly 400 attacks carried by al-Qaida and its affiliates in 2010, which rose to more than 900 in 2013, according to Rand.

The report classifies the groups among three threat levels to the United States. Those presenting a high threat, meaning they are working on plots that target the United States and its embassies and citizens  abroad, include core al-Qaida, al-Qaida in the Arabian Peninsula and "inspired" individuals we mentioned earlier. Groups with a "medium" threat, or plotting against overseas targets, are al-Shabaab (the Somali group behind the mall attack in Nairobi, Kenya) and Ansar al-Sharia Libya.

The big question, of course, is what to do to address it.

Jones’ report urged U.S. military leaders to be more aggressive in targeting Salafi-jihadist groups in Syria, home to more than half of the jihadists in the world. The problem is the Assad government is not an ally. He also warns that a complete exit from Afghanistan could backfire by creating ‘breathing space" for al-Qaida and other groups to regroup and spread.

"The American departure from Afghanistan will most likely be a boost for insurgent and terrorist groups dedicated to overthrowing the Kabul government, establishing an extreme Islamic emirate, and allowing al Qaeda and other groups to establish a sanctuary," Jones wrote for the Wall Street Journal. "As in Iraq, the withdrawal of U.S. troops does not make the terrorism problem go away."

Cheney referenced a Rand Corp. report that showed "a doubling of the number of terrorists out there."

The report he mentions does not look at all terrorism -- just a branch that has the United States and its interests in its crosshairs and is on the rise.

We think it’s clear from his comment that he was referencing the report’s finding that members of Salafi-jihadist groups -- who engage in violent jihad activities -- have doubled. That’s true from 2010 to 2013 based on Rand’s low- and high-end estimates.

We rate his statement True.

Rand Corporation, "A Persistent Threat: The Evolution of al Qa’ida and Other Salafi Jihadists," June 2014