A voter’s guide to casting a ballot in Ohio: 10 things to know

A bowl of stickers waits for voters after they cast their early ballot at the Jefferson County Board of Elections office in Steubenville, Ohio, on Monday, April 4, 2022. (AP)

Ohio voters head to the polls May 3 in one of the earliest competitive primaries for the U.S. Senate. At PolitiFact, we have been busy fact-checking the leading Senate candidates vying to replace retiring Sen. Rob Portman. But now it’s time to focus on you, the voter, and what you need to know about Election Day.

Voting rights advocates in Ohio told us that incidents of voter intimidation at the polls in recent elections have been extremely rare. What’s more common is that some voters misunderstand the rules about voter ID, eligibility and absentee ballots.

This guide answers 10 questions about how to make sure your vote counts and what to do in the event of harassment or intimidation. (Here’s background on the candidates in the race for the Ohio U.S. Senate seat.)

It’s voting day. Can I vote in Ohio? 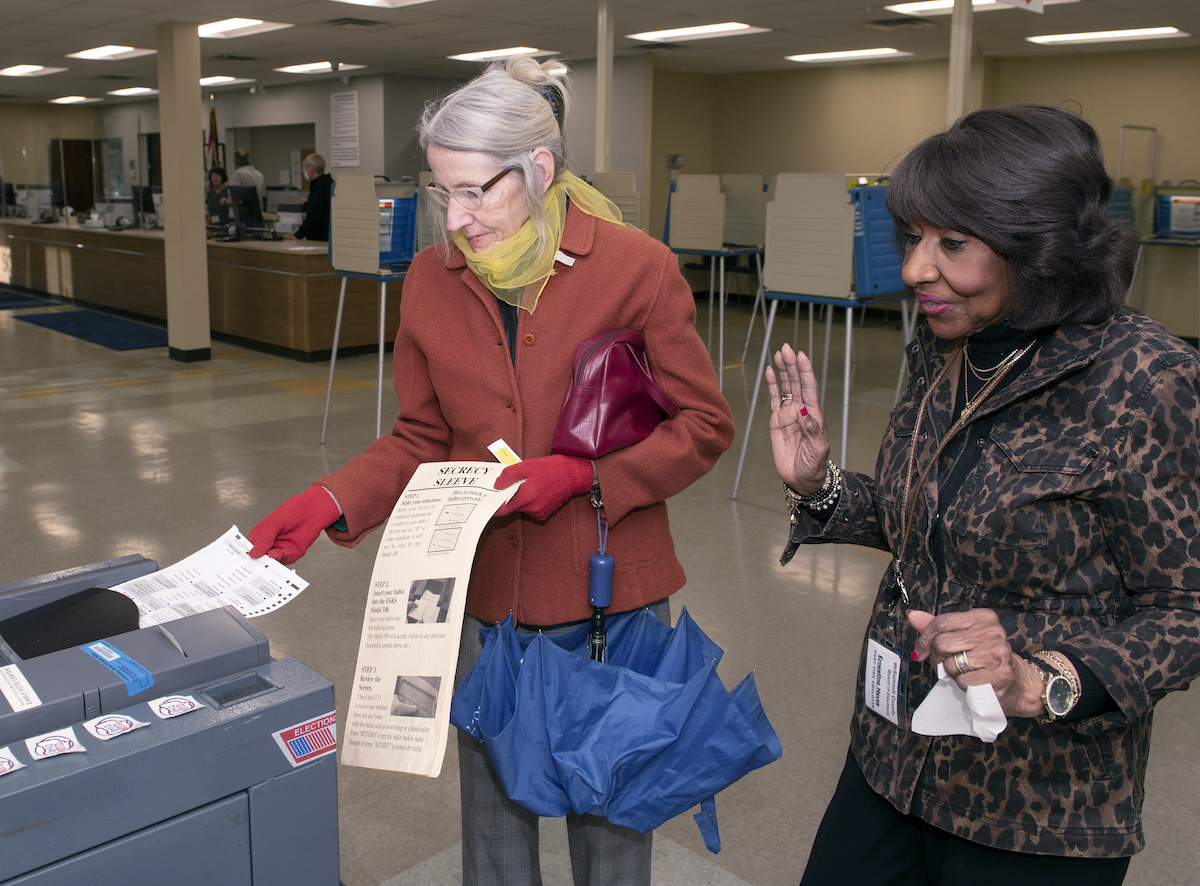 Julie Buchholzer of Akron, Ohio, enters her primary ballot to be scanned as election worker Ernestine Hayes of Akron watches at the Summit County Board of Elections in Akron, Tuesday, April 5, 2022. (AP)

The first step is to verify that you are registered to vote and find your assigned polling location using the Secretary of State website. The local county board of elections can also assist.

On Election Day, voters must cast their ballot at their assigned polling site between 6:30 a.m. and 7:30 p.m.

Early voting, which began April 5, includes the Saturday, Sunday and Monday before Election Day. The early voting hours and locations are listed here by county.

You can also return absentee ballots in-person at your county board of elections before the close of the polls at 7:30 p.m. on Election Day. Follow the instructions about the required information to include on the ballot return envelope. Voters can track the status of their ballot online.

What type of ID is required to vote in person?

Ohio law requires that every voter must provide proof of identity. Ohio accepts a state photo ID, such as a driver's license, as well as other forms of ID such as utility bills and bank statements. (A bill was introduced by a state lawmaker in April to require voters to show a photo ID but that hasn’t received a vote and won’t affect this election.)

What do you do if you show up to vote and are told you can’t cast a ballot?

If a voter shows up to vote in Ohio and is told they aren’t eligible, a voter can cast a provisional ballot. This ballot has the same contents as a regular ballot, but it is cast "provisionally" until election officials can verify the voter's eligibility to vote at the particular precinct. Provisional ballots are used if a voter's eligibility is in question, or if a voter has recently changed their address and did not update their voter registration.

One common myth in Ohio is about who can vote with a criminal record.

What do Ohio’s laws say about voter intimidation?

Under federal law, attempts to interfere with someone trying to vote – whether through intimidation and threats or coercion — can lead to fines or up to a year in prison.

Voter intimidation is not limited to in-person voting sites. Prosecutors filed charges against Jacob Wohl and John Burkman in a 2020 robocall scam targeting Black voters in multiple states including Ohio. Officials say the robocalls falsely told voters if they voted by mail their "personal information will be part of a public database that will be used by police departments to track down old warrants and be used by credit card companies to collect outstanding debts." The men await trial in Ohio and Michigan, and in August the Federal Communications Commission proposed a $5 million fine, which is pending.

Complaints about verbal intimidation during past elections in Ohio were sporadic, election advocates told us.

Can you bring a gun to an election site in Ohio?

Every state sets its own laws for whether firearms can be brought to the polls. Ohio does not have a blanket prohibition on guns at all polling locations, but it does prohibit guns on K–12 school grounds and concealed carry in government buildings, according to the Giffords Law Center to Prevent Gun Violence. Ohio does not prohibit openly carrying firearms in public. Gov. Mike DeWine signed a bill in March to allow permitless concealed carry.

If a person with a firearm intimidates a voter, that would be a violation of the law.

How close can people who aren’t voters or election workers get to polling sites?

Journalists must be provided access to polling sites, but they can’t interfere with voting. They must ask for a voter’s permission before recording them in or around the polling site.

Exit polling is not considered electioneering, so it can take place within the neutral zone.

Can campaigns hand out food and water to voters in line?

Distributing food or campaign material inside that 100-foot neutral zone is banned. Individuals or groups can distribute mailers or food outside of the zone.

Who are election observers and what do they do?

On Election Day you may see an election observer at your polling site. Political parties and groups of candidates may appoint observers. Police officers, members of the military and militias as well as candidates are not allowed to be observers.

The role of observers is limited to observing the proceedings of an election. Observers may not enforce the law or advocate on behalf of voters although they may leave the voting area to contact the board of elections to raise concerns.

If I feel intimidated, what should I do?

Voters concerned about attempts to intimidate them at a polling site can ask to speak to an election worker or call their county board of elections.

Sherry Poland, elections director in Hamilton County, said her county has help desks to address problems or concerns surfaced by the public and by poll workers.

"We have troubleshooters in the field that can respond quickly to evaluate and assist in de-escalating the situation," Poland said. "The need to involve law enforcement at a polling place is extremely rare."

Voters can also call a national voter protection hotline at 866-OUR-VOTE (866-687-8683), organized by voting rights groups including Common Cause, the League of Women Voters and the NAACP.

Jen Miller, executive director of the League of Women Voters of Ohio, said the main tool for boards of elections if there is a problem is to call law enforcement. "That might make some voters feel better — others not," Miller said

"We ask clergy and social workers or others who have de-escalation training to be part of our peacekeepers," Miller said. "We get calls to our election protection hotline, and we ask those individuals to go to the board of elections or early vote centers."

If I hear rumors about voting issues, what should I do?

Don’t share unsubstantiated claims about polling conditions on social media, and don’t assume such claims are true without doing some fact-checking.

The first step is to see what state and local election officials have said about such allegations on social media or their own websites.

For instance, back in 2016, an online story warned that "tens of thousands of fraudulent Clinton votes" were found in an Ohio warehouse. We were able to debunk that story, in part by finding a press release from the Secretary of State’s Office published the same day as the false story. 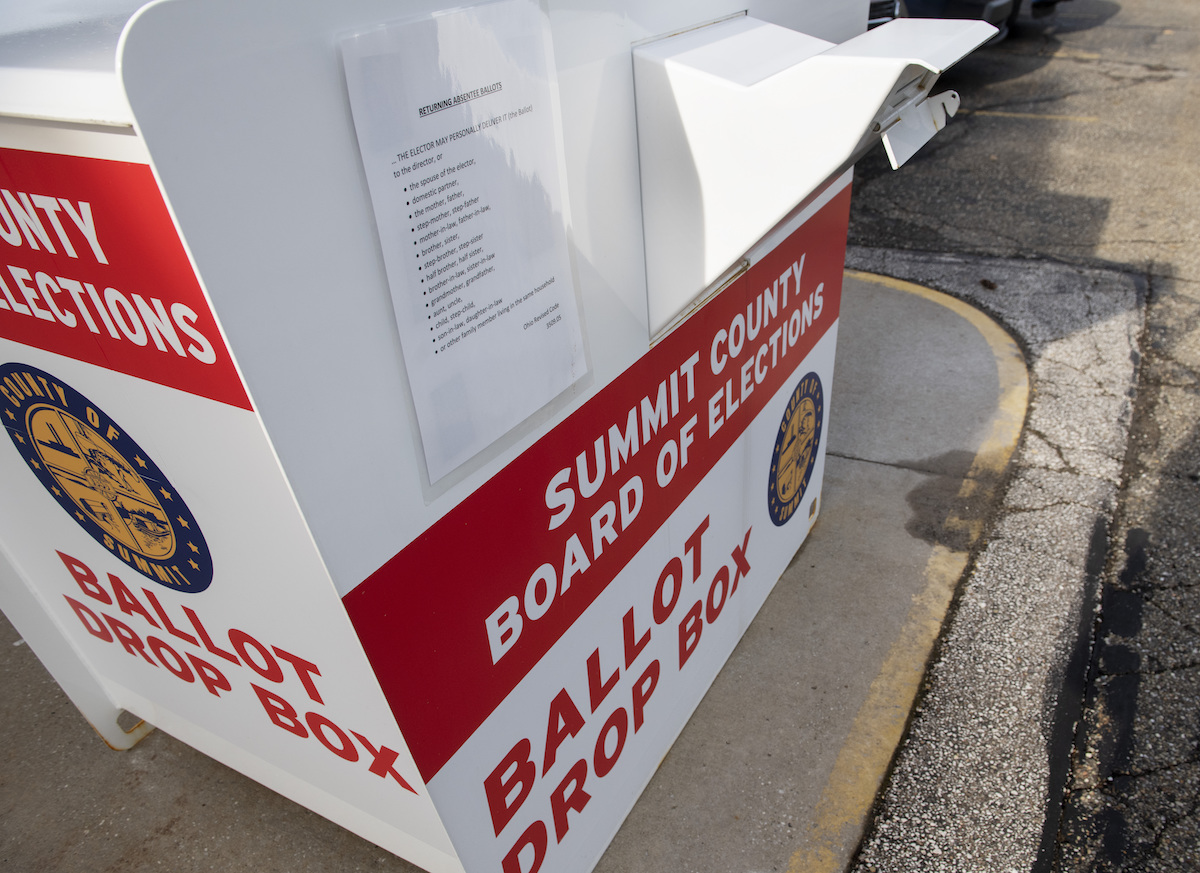 A lone ballot drop box at the Summit County Board of Elections in Akron, Ohio, is ready to be used on the first day of primary voting, Tuesday, April 5, 2022. (AP)

Remember that every vote counts! Between 2013 and 2017, there were 141 contests that resulted in a tie vote or a one-vote difference, officials told us.

The Secretary of State's Office will provide unofficial results starting at 8 p.m. for the statewide races.

Spot any misinformation about voting in Ohio this year? Email us at truthometer@politifact.com.

PolitiFact, No, Harris did not break Ohio law with election site visit, Oct. 28, 2020

Email interview, Sherry Poland, director of the Hamilton County board of elections, April 26, 2022

Email interview, Mike West, spokesperson for the Cuyahoga County board of elections, April 26, 2022