President Donald Trump in a Fox News interview criticized local officials who he believes have lost control of protesters, defended his controversial tweet that evoked use of excessive force by police and stood by his decision to stage a Bible-hoisting photo op at a church in Washington, D.C.

Host Harris Faulkner told Trump he frightened a lot of people with his May 29 tweet saying, "when the looting starts, the shooting starts," in reference to demonstrations after George Floyd’s killing by a white police officer. Trump said he heard the expression over the years, attributing it to a police commissioner and mayor in Philadelphia in the 1960s and 1970s. Faulkner pushed back on that, saying it’s linked to a police chief in Miami who didn’t care if his officers’ actions were considered police brutality.

PolitiFact listened to Trump’s Fox News interview and found that he left out important context in several of his claims, including the one about looting and shooting. Here’s a recap.

In 1967, as civil rights protests swept the country, Miami police chief Walter Headley vowed to crack down on young African American men who he said "have taken advantage of the civil rights campaign." There had been a series of robberies in the African American community of Liberty City.

Headley at a December 1967 press conference said, "We don't mind being accused of police brutality. They haven't seen anything yet."

He added: "We haven't had any serious problems with civil uprising and looting because I've let the word filter down that when the looting starts, the shooting starts."

In his book "Resolving Racial Conflict," Colgate University political scientist Bertram Levine wrote that "a variety of sheriffs and police chiefs" around the country picked up the slogan.

Garth Pauley, professor of communications at Calvin University, said the phrase aimed to instill fear in African Americans. Trump’s use of the slogan retains that power, Pauley said, "while simultaneously communicating a tough, law-and-order ethos to his supporters."

RELATED: From Miami '67 to Donald Trump 2020: The history of 'when the looting starts, the shooting starts'

Speaking about a Bible photo op at St. John’s Church in Washington, D.C., "I think Christians think it was a beautiful picture."

Christians are not a monolith, and many church leaders spoke out against Trump's pose.

Background on the photo op: On June 1, Trump walked out of the White House and across Lafayette Square to go stand outside St. John’s Church, an Episcopal parish damaged by protesters. When he got there, he was handed a Bible. He posed for pictures with the Bible, at one point raising it with his right hand. Before he got there, federal officers used pepper balls containing a chemical irritant to forcibly clear out protesters from the area around the church.

No one associated with St. John’s Church was present or informed of the president’s plans. The Rev. Mariann Budde, the bishop of the Episcopal Diocese of Washington, told the Washington Post she was "outraged" and that the church was used "as a prop."

Presiding Bishop Michael Curry, head of the Episcopal Church, tweeted that Trump "used a church building and the Holy Bible for partisan political purposes." In a time of pain, Curry said, "his action did nothing to help us or to heal us."

Leaders of other Christian churches criticized the move. So did leaders of the Wheaton College Billy Graham Center, writing in a June 2 post for Christianity Today: "America is burning. We need a call to justice that sees each and every person as image bearers of their Creator—as the Bible teaches. But, we did not need that photo op."

The American Bible Society, a nonprofit that seeks to increase access to the Bible, in a blog post the day after Trump’s photo op, said that the Bible has been an important part of the American experience, especially in times of crisis, but cautioned against misusing it.

"In this time of pandemic fear and social isolation, in this time of racial injustice and senseless violence, in this time of economic uncertainty and generational pain. We should be careful not to use the Bible as a political symbol, one more prop in a noisy news cycle," wrote Whitney T. Kuniholm, who serves on the senior leadership team at the American Bible Society. The post did not mention Trump.

Franklin Graham, who leads the Billy Graham Evangelistic Association, in a June 3 Facebook post said he appreciated Trump’s action. "I’m not offended that he held up the Bible — as a matter of fact, I was encouraged!" Graham wrote. People who said Trump should have prayed at the church "are nitpicking his gesture," he said.

Robert Jeffress, a Dallas megachurch pastor, told The Atlantic he thought "it was completely appropriate for the president to stand in front of that church."

"And by holding up the Bible, he was showing us that it teaches that, yes, God hates racism, it’s despicable — but God also hates lawlessness," Jeffress said. 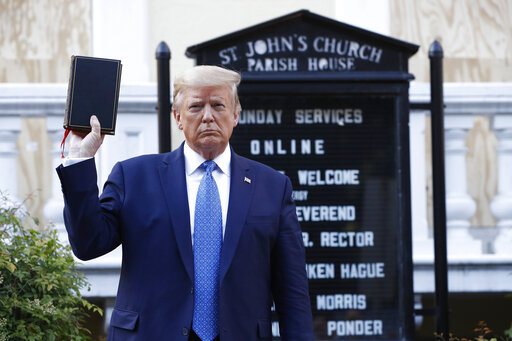 President Donald Trump holds a Bible as he visits outside St. John's Church across Lafayette Park from the White House, June 1, 2020, in Washington. Part of the church was set on fire during protests on Sunday night. (AP/Patrick Semansky)

"‘Defunding’ to a lot of people means break up the police forces, and either that or don't give them any money, so essentially they are breaking it up."

People protesting police brutality are calling for overhauls in law enforcement, including a demand to "defund the police."

Some protesters do want to eliminate police departments entirely. Others want to reduce the types of calls that officers respond to and reallocate police funding toward other community services.

Kailee Scales, a leader of the Black Lives Matter movement, said the group was calling for a "divestment in police in order to support more teachers, mental health and restorative services, community resilience departments, social workers, and government resource liaisons."

RELATED: ‘Defund the police’ movement: What do activists mean by that?

"I think I’ve done more for the black community than any other president, and let’s take a pass on Abraham Lincoln, cause he did good although it’s always questionable, you know in other words, the end result."

However, there were several other presidents who worked to improve the lives of African Americans during their tenure beyond Abraham Lincoln, who prosecuted the Civil War and pushed the constitutional amendments that ended slavery.

Second only to Lincoln, historians say, is President Lyndon B. Johnson, who fought for and signed the Civil Rights Act and the Voting Rights Act, two of the most far-reaching laws passed in the 20th century. Johnson, a skilled legislator from his years in the Senate, deliberately crafted his agenda and pushed it through Congress with personal persuasion, to a far greater degree than Trump has, historians say.

Jeffrey A. Engel, director of Southern Methodist University’s Center for Presidential History, told us last year that a good way to compare the presidents on race is to gauge whether they are "ahead of their times" or "behind their times."

Engel said Johnson and President Harry Truman, who moved to desegregate the military, were ahead of their times, while President Woodrow Wilson was behind his, reversing some earlier policies that had banned discrimination in federal hiring.

"Trump in this sense is way behind the times," Engel said. "We have not had presidents since Ronald Reagan that so openly used race as a political weapon. Trump is blunt well beyond the norms of his time."

The Atlantic, The Christians Who Loved Trump’s Stunt, June 2, 2020

The Washington Post, Episcopal bishop on President Trump: ‘Everything he has said and done is to inflame violence’, June 1, 2020