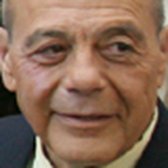 Vincent "Buddy" Cianci is a talk-radio host and ex-convict who spent more time serving as mayor of Providence (21 years from 1975 to 2002) than anyone in the city's history. He is the author of "Politics and Pasta: How I Prosecuted Mobsters, Rebuilt a Dying City, Advised a President, Dined with Sinatra, Spent Five Years in a Federally Funded Gated Community, and Lived to Tell the Tale." He was defeated in the 2014 mayoral election when he ran as an independent.