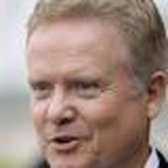 Jim Webb is running for president of the United States in 2016. Webb, a Democrat, served as a U.S. senator from Virginia in 2007-13. He served as the first Assistant Secreatry of Defense for Reserve Affairs and Secretary of the Navy in the Ronald Reagan administration. Webb is a 1968 graduate of the U.S. Naval Academy and served as a Marine Corps infantry officer until 1972 and saw action in the Vietnam War, for which he was awarded the Navy Cross, Silver Star, two Bronze Stars and two Purple Hearts. Webb was born in Saint Joseph, Mo. He also has a law degree from Georgetown Law Center, Washington, D.C. He has written fiction and nonfictions books and won an Emmy award for his 1983 PBS coverage of the U.S. Marines in Beirut. He frequently writes opinion columns for many publications.