Facebook posts
stated on September 11, 2022 in a Facebook post:
King Charles III signed “a proclamation stating that Donald Trump won the 2020 presidential election and is the rightful president by law.”

King Charles III signs an oath to uphold the security of the Church in Scotland during the Accession Council at St James's Palace in London on Sept. 10, 2022. (AP)

As if losing his mother and ascending the throne wasn’t enough for one week, the United Kingdom’s newly proclaimed King Charles III also tried to rewrite U.S. history Sept. 10.

At least, that’s what some social media users are falsely claiming.

"King Charles III signs a proclamation stating that Donald Trump won the 2020 presidential election and is the rightful president by law," read one Sept. 11 Facebook post.

It continued, saying that Charles warned President Joe Biden and Vice President Kamala Harris "to vacate the premises within 48 hours" or the U.K. would declare war on the U.S.

The post was flagged as part of Facebook’s efforts to combat false news and misinformation on its News Feed. (Read more about our partnership with Facebook.) The claim also spread on Twitter. 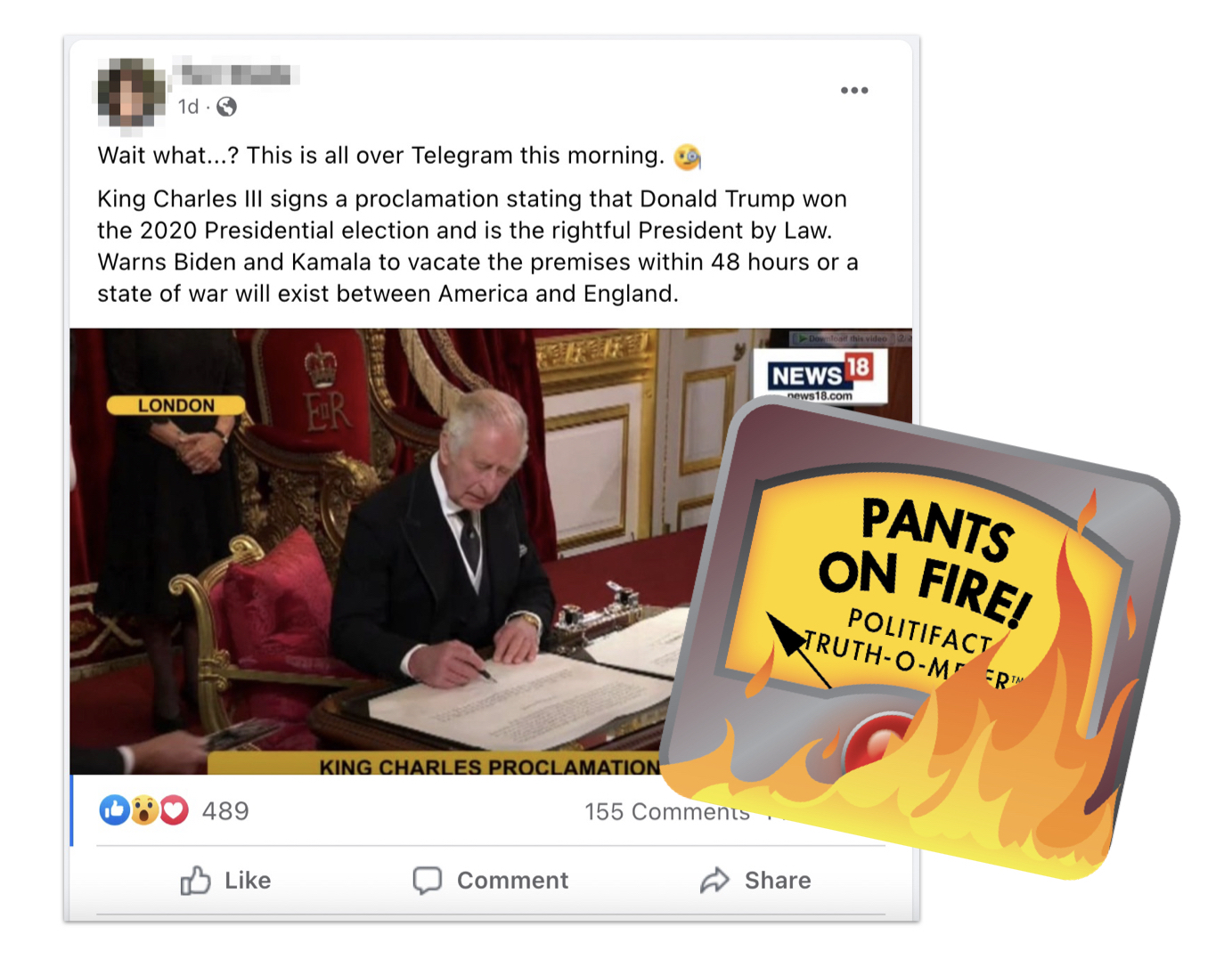 After 70 years on the throne, Queen Elizabeth II, 96, died peacefully at Balmoral Castle in Scotland on Sept. 8, according to the royal family. Her eldest son, now King Charles III, ascended the throne upon her death.

He was formally proclaimed king on Sept. 10. The accession ceremony was a constitutional and ceremonial step that was broadcast live on television and online. As part of the ceremony, Charles read and signed an oath to uphold the Church of Scotland.

The image shared on Facebook shows the king signing that oath. It does not show him signing a proclamation declaring former U.S. President Donald Trump the winner of the United States’ 2020 presidential election.

Trump lost that election and there is no evidence it was because of widespread fraud. The results are clear: Biden won.

There’s also no evidence Charles is declaring war on the U.S. As king, he is the only person in the U.K. with the power to declare war, but such a declaration would need approval from Parliament and the prime minister.

A Facebook post claimed King Charles III signed "a proclamation stating that Donald Trump won the 2020 presidential election" and planned to declare war on the U.S. if Biden did not step aside.

That’s a fabrication. At a ceremony on Sept. 10, Charles signed an oath stating that he would uphold the Church of Scotland. He took no action related to the 2020 U.S. election nor did he threaten war of any kind.

We rate this claim Pants on Fire.

The Guardian, "King Charles signals to aide to remove pens during signing of oath – video," Sept. 10, 2022

CNBC, "King Charles spent decades preparing for the throne. His reign promises to be unlike his mother’s," Sept. 10, 2022

Business Insider, "9 things Queen Elizabeth II actually has the power to do," June 25, 2018