Instagram posts
stated on November 3, 2022 in a video:
A video shows a whistleblower creating fraudulent military ballots during the 2020 presidential election.

At an Oct. 29 event featuring well-known election deniers, a panelist showed a video he framed as a distressing example of vulnerability in U.S. election infrastructure.

"This is an Iranian whistleblower," said Mark Cook, who introduced the video. "This just got dropped in my lap a couple days ago. But this is actually real."

"This is a video from their system and they did this, apparently, in the 2020 election," Cook said during a conference co-sponsored by the America First Secretary of State Coalition. The coalition is a QAnon-linked group of Republican election deniers who ran in 2022 to take control of elections offices in Nevada, Arizona, Michigan and other swing states.

Video footage from the event circulated widely on social media in the days before the Nov. 8 midterm elections, including in a Nov. 3 Instagram post. 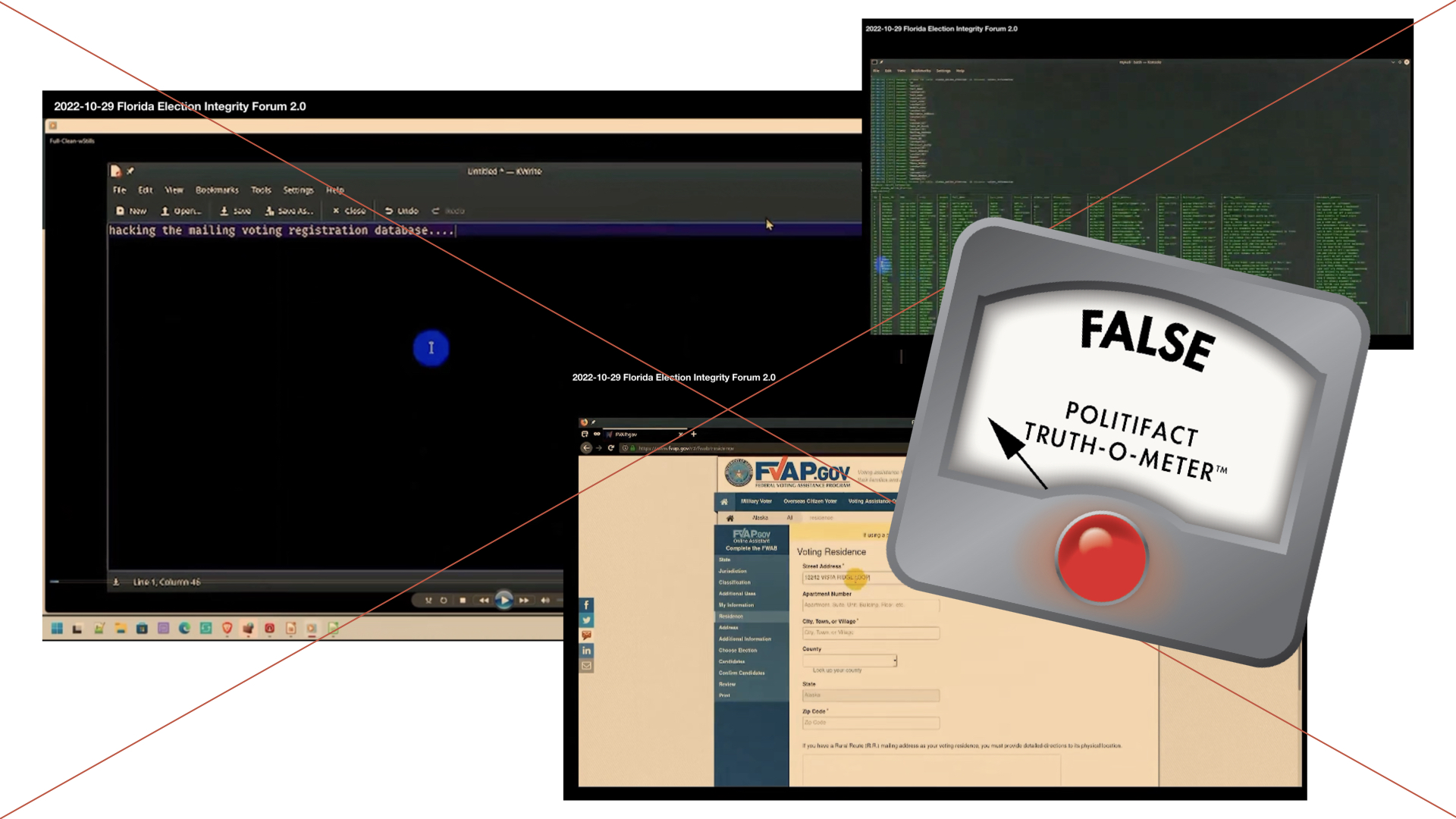 This video, which was showed at an event featuring well-known election deniers, did not show the fraudulent creation of real ballots. (Screenshots from ACCFEI event recording)

When PolitiFact investigated the origin of the video Cook showed, we found that it does not show the fraudulent creation of real ballots. It was a simulation created during the 2020 presidential election as part of an effort to undermine voters’ confidence in the security of U.S. election infrastructure, federal officials said.

Federal officials discovered this effort, investigated it and charged two people involved in the conspiracy with crimes. U.S. Attorney Damian Williams for the Southern District of New York in 2021 described the video as "a fictitious video that purported to depict actors fabricating overseas ballots."

Nicholas Biase, a U.S. Attorney’s Office spokesperson, said the video Cook showed features the same content that was linked to a voter intimidation and influence campaign that took place from August to November 2020.

He said it substantially matches a video referred to in a 2021 indictment. The Justice Department said two Iranian nationals had created and circulated a "false election video" that depicted "an individual hacking into state voter websites and using stolen voter information to create fraudulent absentee ballots through the Federal Voting Assistance Program (FVAP) for military and overseas voters."

Federal investigators made it clear, though, that the video was not evidence that someone had created fraudulent ballots that were counted during the 2020 presidential election.

"The computer intrusions depicted in the False Election Video were simulated intrusions created by members of the conspiracy using their own server and data obtained" when the hackers successfully compromised one state’s voter registration website, the Justice Department said. "Further, the (Federal Voting Assistance Program) could not actually be leveraged in the manner implied by the False Election Video."

The U.S. Treasury Department in 2021 also announced it was imposing sanctions on six Iranians and one Iranian entity in connection with the attempt to influence the U.S. election in 2020.

A video shared on Instagram says it shows a whistleblower creating fraudulent military ballots during the 2020 presidential election.

The clip does not depict the fraudulent creation of real ballots.

A Justice Department official confirmed that the video features the same content as one linked to a 2020 voter intimidation and influence campaign. That video was a simulation, and the people who created it were charged with breaking several federal laws.

RELATED: A coalition of ‘stop the steal’ Republicans aims to take control of US elections. QAnon is helping