Ron DeSantis
stated on October 24, 2022 in a gubernatorial debate:
It's not true that "the United States was built on stolen land."

As Florida's governor, Republican Ron DeSantis has repeatedly stated his conviction that leaders need to fight attempts to "indoctrinate students" in classrooms.

In the only gubernatorial debate before the Nov. 8 election, Gov. DeSantis contrasted his record on education with that of Democratic challenger Charlie Crist and Crist's running mate Karla Hernández-Mats.

"You have people that are teaching — and actually his running mate has said this in the past — that teaching the United States was built on stolen land," DeSantis said Oct. 24. "That is inappropriate for our schools; it's not true."

We wondered what DeSantis was referring to and whether he was right in his assessment of whether the U.S. was built on "stolen land."

DeSantis' campaign did not get back to us. But his remark echoed tweets from Christina Pushaw, rapid response director for DeSantis' re-election campaign. One tweet included a screenshot of a June 24, 2018, Facebook post from United Teachers of Dade, where Hernández-Mats, a former special education teacher, has been president since 2016.

The Facebook post included an image of a sign that read: "No one is illegal on stolen land." Hernández-Mats did not respond to specific questions about the image. The post was shared at a time when U.S. immigration policies were dominating the news.

We reached out to historians of Native and non-Native descent. All of them said it is well documented that the U.S. acquired Native American land through dubious treaties and, at times, forcefully confiscated ancestral territories to bolster the country's expansion.

Deloria said the U.S. often placed compensation for these deals in U.S.-controlled trust funds or promised payment over a number of years, but then failed to follow through.

The Sioux Agreement of 1877 is an example of the U.S. acquiring land from Native Americans through fraudulent practices and treaty violations.
In 1868, the U.S. signed a treaty recognizing the Black Hills, a 7-million-acre South Dakota mountain range, as part of the Great Sioux Reservation. It set the land "apart for the absolute and undisturbed use and occupation" of the Sioux, a Native American tribe. 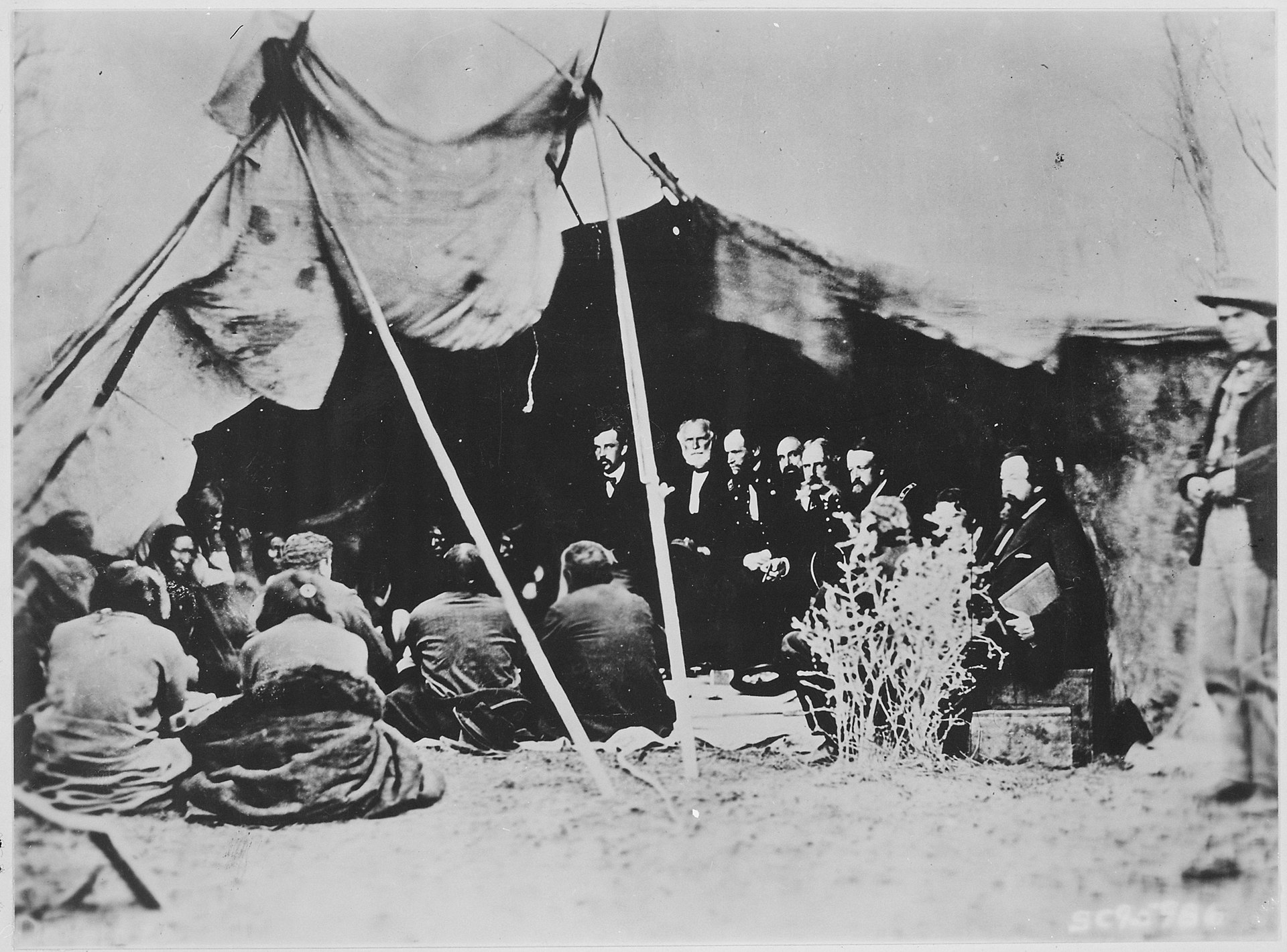 An image captured in 1868 shows U.S. Army Gen. William T. Sherman and Sioux leaders at Fort Laramie, Wyoming, signing a peace treaty that recognized the Black Hills as part of the Great Sioux Reservation. Its terms disintegrated after U.S. officials sought to annex the land, rumored to have gold. The event formed the basis for a 1980 Supreme Court ruling that found the U.S. had taken the tribal lands illegally. (National Archives and Records Administration)
The treaty between the U.S. government and the Sioux said that non-Native people "are not permitted to pass over, settle upon, or reside in the territory." Speculation that the Black Hills contained gold, however, led miners to trespass on Sioux territory.
The U.S. then moved to negotiate with the Sioux to acquire the land. The deal fell through, which led to a war and hundreds of deaths. The tribe later surrendered and signed a treaty that ceded the Black Hills to the U.S.
The U.S. Court of Federal Claims ruled in 1975 that the Sioux are entitled to damages of around $17 million for this land seizure. The court remarked: "A more ripe and rank case of dishonorable dealings will never, in all probability, be found in our history."
In 1980, the U.S. Supreme Court ruled that the U.S. government had acquired the Black Hills through "unfair and dishonorable dealing" and affirmed that it owed the Sioux tribe "just compensation," including interest.
In a dissenting opinion, Chief Justice William Rehnquist wrote, "There was tragedy, deception, barbarity, and virtually every other vice known to man in the 300-year history of the expansion of the original 13 Colonies into a Nation which now embraces more than three million square miles."
The U.S. sometimes bought Native land from European countries, like France, and claimed ownership even though "France did not treaty with the many tribes who lived upon that land," said Randy Woodley, director of intercultural and indigenous studies at George Fox University.
The federal government also forcibly removed Native Americans from their ancestral lands after former President Andrew Jackson signed the Indian Removal Act of 1830. That expulsion became known as the "Trail of Tears," which killed thousands of Native Americans. 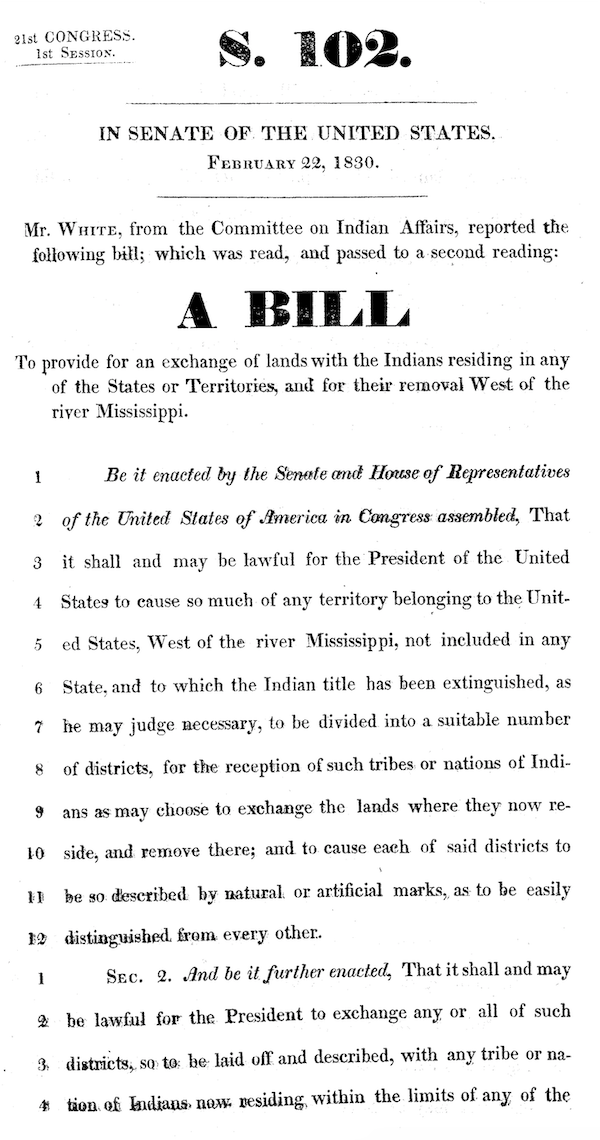 An image shows a page from the bill that would go on to become the Indian Removal Act of 1830. (Library of Congress)
The Seminoles resisted relocation, and the result was a half-century of warfare.
Andrew Frank, a Florida State University professor who specializes in the history of the Seminoles, said the U.S. annexed much of Florida through treaties that a majority of the tribal leaders opposed.
The U.S. military drove out more than 3,000 Seminoles from the state, according to the Florida Department of State. Around 300 members of the tribe remained in Florida.
"The post-Civil War period is full of people being compressed, contained, and confined onto small reservations within their territory, in order to accommodate non-Native settlement," Deloria told PolitiFact.
In 1946, the federal government created the Indian Claims Commission to resolve legal claims that the U.S. obtained Native American land through questionable or fraudulent economic transactions.
It lasted until 1978, and unsettled claims were transferred to the U.S. Court of Claims. The commission found that the U.S. government's payment of $152,500 to the Seminoles for about 23 million acres of land in Florida was "clearly unconscionable."
The Indian Claims Commission completed 546 cases, awarding about $818 million to Native American tribes.
"It is historically inaccurate to say the land was not stolen from Native Americans," Woodley said.
Our ruling

DeSantis said it's not true that "the United States was built on stolen land."

Historians of Native and non-Native descent said DeSantis' characterization is wrong. It's well-documented that the U.S. repeatedly made treaties with Native Americans and then violated them using force and other means to accommodate non-Native settlement. Courts, including the U.S. Supreme Court, have time and again affirmed that as fact.

Government-endorsed actions to remove Native Americans from their ancestral lands included the 1830 passage of a federal law that led to war and resulted in thousands of Native deaths and more than 3,000 Seminoles being removed from Florida.

DeSantis' claim is wildly historically inaccurate. We rate it Pants on Fire!

Read this fact-check in Spanish.

Email interview with Andrew Frank, a Florida State University professor who specializes in the history of the Seminoles, Nov. 1, 2022

Digital Public Library of America, An 1837 message from Brigadier General John E. Wool to the Cherokee Nation warning them of the consequences of resisting removal, accessed Nov. 3, 2022