Facebook posts
stated on May 13, 2022 in an image shared on Facebook:
Says Fox News and Candace Owens tweeted that “New studies show that 68% of those who used ivermectin to treat or prevent covid are suffering long-term bowel and urinary incontinence.”

A box of ivermectin is shown in a pharmacy as pharmacists work in the background, Thursday, Sept. 9, 2021, in Georgia. (AP)

Images of tweets shared on Facebook suggest that those who used the anti-parasitic medication ivermectin for COVID-19 treatment or prevention might have to contend with some unpleasant side effects.

"Ivermectin’s hidden cost: New studies show that 68% of those who used ivermectin to treat or prevent Covid are suffering long-term bowel and urinary incontinence," read what looked like a screenshot of a verified Fox News tweet.

The screenshot, which was shared on Facebook on May 13, also showed an alleged reply to the Fox News tweet from conservative commentator Candace Owens.

"Well this explains a few things," Owens appeared to say, adding an emoji with a distressed expression.

These tweets are fake. And these "new studies" with troubling ivermectin findings don’t exist. The entire thing is fabricated. 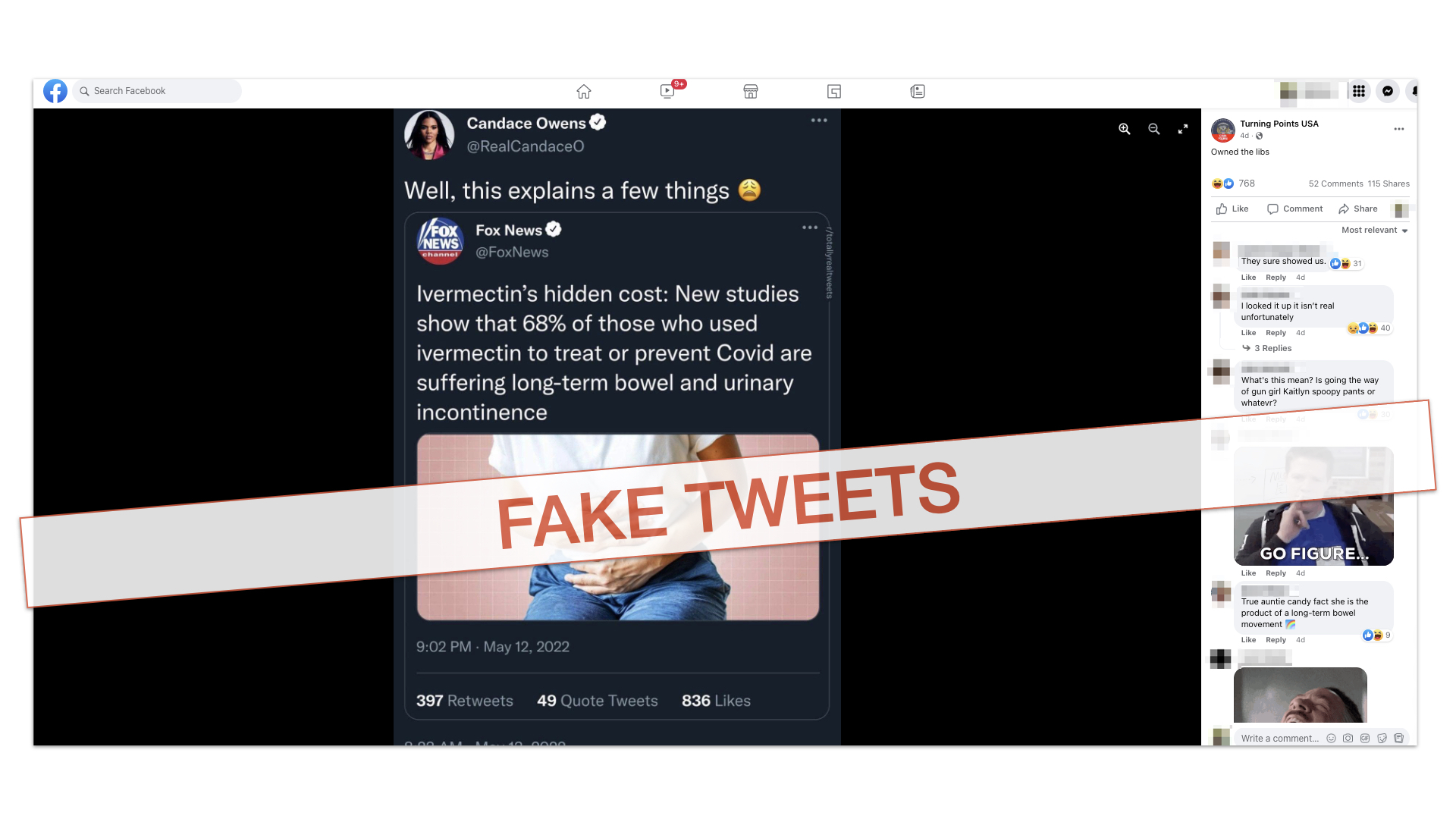 The screenshot was shared by a Facebook account using the name "Turning Points USA" — an apparent jab at Turning Point USA, a conservative group founded by Charlie Kirk where Owens once worked as a spokesperson.

PolitiFact searched Owens’ and Fox News’ verified accounts and archives of their tweets and found no evidence that either account had ever shared the tweets from the screenshot.

Instagram posts
stated on November 13, 2022 in a post
The death of a 4-year-old who appeared in vaccination campaign posters is linked to vaccines.

Also, if you look closely at the upper right corner of the fake Fox News tweet in the image, you’ll see the phrase "r/totallyrealtweets," which suggests the image is linked to a Reddit community that shares fake and satirical tweets.

Ivermectin has been studied as a COVID-19 treatment, but neither the Food and Drug Administration nor the National Institutes of Health’s COVID-19 Treatment Guidelines Panel recommend using ivermectin to treat COVID-19.

As of April 29, the NIH panel "recommends against the use of ivermectin for the treatment of COVID-19, except in clinical trials."

In frequently asked questions from April 2021, the FDA said: "While there are approved uses for ivermectin in people and animals, it is not approved for the prevention or treatment of COVID-19."

The FDA said that side effects associated with ivermectin use include things such as skin rashes, nausea, vomiting, diarrhea, stomach pain, limb swelling, sudden blood pressure drops and liver injuries. Because of the potential side effects, "any use of ivermectin for the prevention or treatment of COVID-19 should be avoided as its benefits and safety for these purposes have not been established."

Public health organizations’ repeated warnings didn’t stop people from promoting the drug for COVID-19, and some doctors continue to prescribe ivermectin for the virus.

Still, we found no evidence to suggest that "long-term bowel and urinary incontinence" should be among the legitimate concerns for people who used the anti-parasitic against COVID-19 in the face of such warnings.

We were unable to find any "new studies" that found 68% of people who used ivermectin for COVID-19 were experiencing such side effects.

Our searches for those studies turned up only fact-checks debunking these fake tweets and a 2017 study that looked at the effects of administering ivermectin to a large group of people in Democratic Republic of Congo. In that study, people reported "a wide range of adverse events, including headache, coma, abnormal gait, stupor, asthenia, conjunctival hemorrhage, fever, back pain, urinary incontinence and psychiatric disorders" after taking the drug. That was, of course, years before COVID-19 was first detected.

An image shared on Facebook suggests Fox News and Candace Owens tweeted that "new studies show that 68% of those who used ivermectin to treat or prevent covid are suffering long-term bowel and urinary incontinence."

These tweets are fake, and there’s no evidence that "new studies" with troubling ivermectin findings about incontinence actually exist.

Check Your Fact, "Fact Check: Did Fox News Tweet About Studies That Link Ivermectin To Incontinence?" May 18, 2022

U.S. Centers for Disease Control and Prevention, "COVID-19 Treatments and Medications," accessed May 18, 2022