Facebook posts
stated on May 8, 2022 in a photo:
Says photo shows "the sharpest image of the sun ever recorded."

• The photo, from 2021, has been “heavily software-processed” and digitally enhanced, the photographer said.

• In March, the highest resolution photo of the sun’s full disk and its corona was captured by a satellite.

A Facebook post that claims to show the sun as you’ve never seen it is not what it seems.

The May 8 post has a caption that says a photo shows "the sharpest image of the sun ever recorded." In the image, the sun has the appearance of being covered in a soft material, similar to hair or fur.

The photo is a "heavily software-processed image," photographer Jason Guenzel wrote in a Jan. 20, 2021, Twitter post about the image. He also explained in a 2021 interview that he had digitally enhanced the image by using software to sharpen it and change its contrast.

"Walking the thin line between science and art ... perhaps blurring it a bit," Guenzel tweeted. 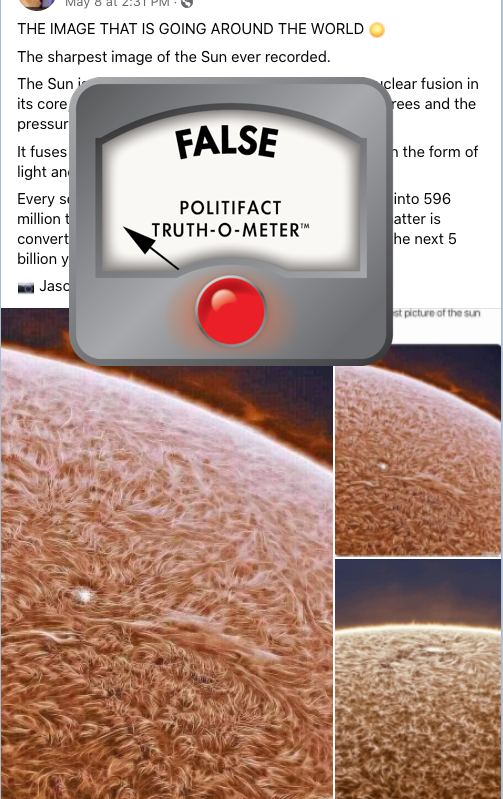 (Screengrab from Facebook)
More recently, on March 7, the highest resolution photo ever taken of the sun’s full disc and corona was captured by the Solar Orbiter, a cooperative mission between the European Space Agency and NASA, according to the European Space Agency. The image was created by combining 25 photos.
"Taken one after the other, the full image was captured over a period of more than four hours because each tile takes about 10 minutes, including the time for the spacecraft to point from one segment to the next," according to the European Space Agency.
And in 2020, astronomers released what they said were the most detailed images of the surface of the sun.
The claim that a Facebook post with another image represents "the sharpest image of the Sun ever recorded" has no factual basis. We rate it False.

New York Times, "These Images Show the Sun’s Surface in Greater Detail Than Ever Before," Jan. 29, 2020