Facebook posts
stated on February 27, 2022 in a post:
"An 8-year-old Ukrainian girl confronts a Russian soldier telling him to go back to his country.”

• The photo was taken in 2012 in the West Bank, when a Palestinian child confronted an Israeli soldier.

A nearly 10-year-old photo is being misrepresented on social media as an image from present-day Ukraine.

"An 8-year-old Ukrainian girl confronts a Russian soldier telling him to go back to his country," says the caption on the Feb. 27 post on Facebook. "This is courageous." The post includes photos of a young girl who appears to be confronting a man wearing military fatigues and carrying a gun.

The photo was taken in 2012 in the West Bank, when Palestinian Ahed Tamimi, who was then 10 years old, confronted an Israeli soldier. 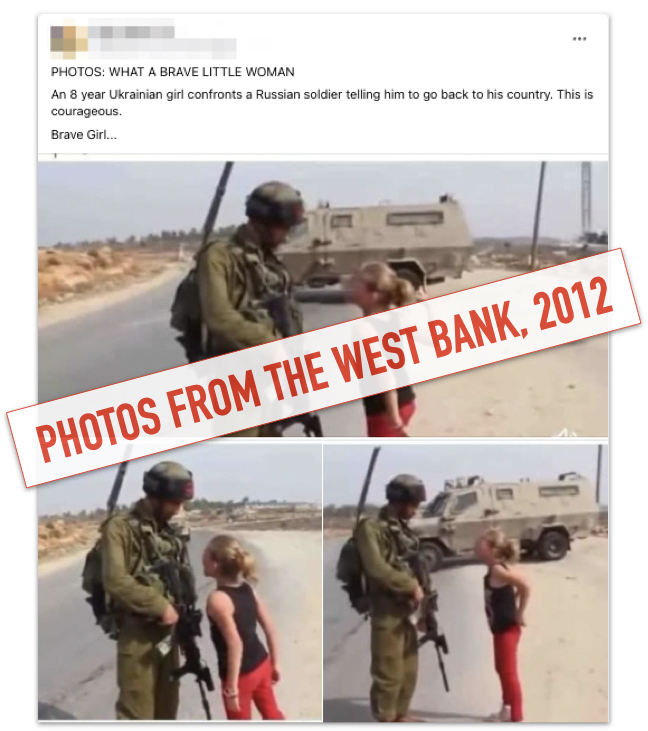 Instagram posts
stated on January 26, 2023 in a video
The amount the U.S. has spent in Ukraine is “double the U.S. expenditure for its own war in Afghanistan.”

Tamimi "gained fame among Palestinian activists for an incident in which she led a group of children, including her younger brother, in arguing with Israeli soldiers," The Times of Israel reported in 2018, when Tamimi had been charged in a separate encounter involving Israeli soldiers. "In a video of the [2012] incident, she can be seen repeatedly raising her balled fist at a soldier, poised to hit him, but never actually doing so."

The 2012 confrontation was captured on video and in photos.

The Facebook page that shared the post on Feb. 27, Holy Spirit TV, posted again on Feb. 28 to clarify that the earlier post did not contain images from Ukraine.

"Footage from 2012 recorded in occupied Palestine has become viral in 2022," the Feb. 28 post says. "It took 10 years for the mainstream media to acknowledge the girl is a ‘brave’ one and the soldier is an ‘invading’ trooper, only when it could be falsely presented as a video of the Russia-Ukraine conflict."

We rate the claim that a photo shows an 8-year-old Ukrainian girl confronting a Russian soldier False.