Viral image
stated on July 14, 2022 in a Facebook post:
A “small area” in western Texas and southeastern New Mexico “has enough oil to fuel America for the next 200 years.”

Does America possess enough oil in 86,000 square miles to fuel the nation for two centuries?

Sounds like a pipe(line) dream, but according to a viral image on Facebook, a "small area" in western Texas and southeastern New Mexico "has enough oil to fuel America for the next 200 years."

The post is correct that the shaded area of the map, known as the Permian Basin, has large quantities of oil and natural gas. But current estimates don’t add up to a 200-year supply, and dynamic economic and geological factors make long-term predictions nearly impossible. 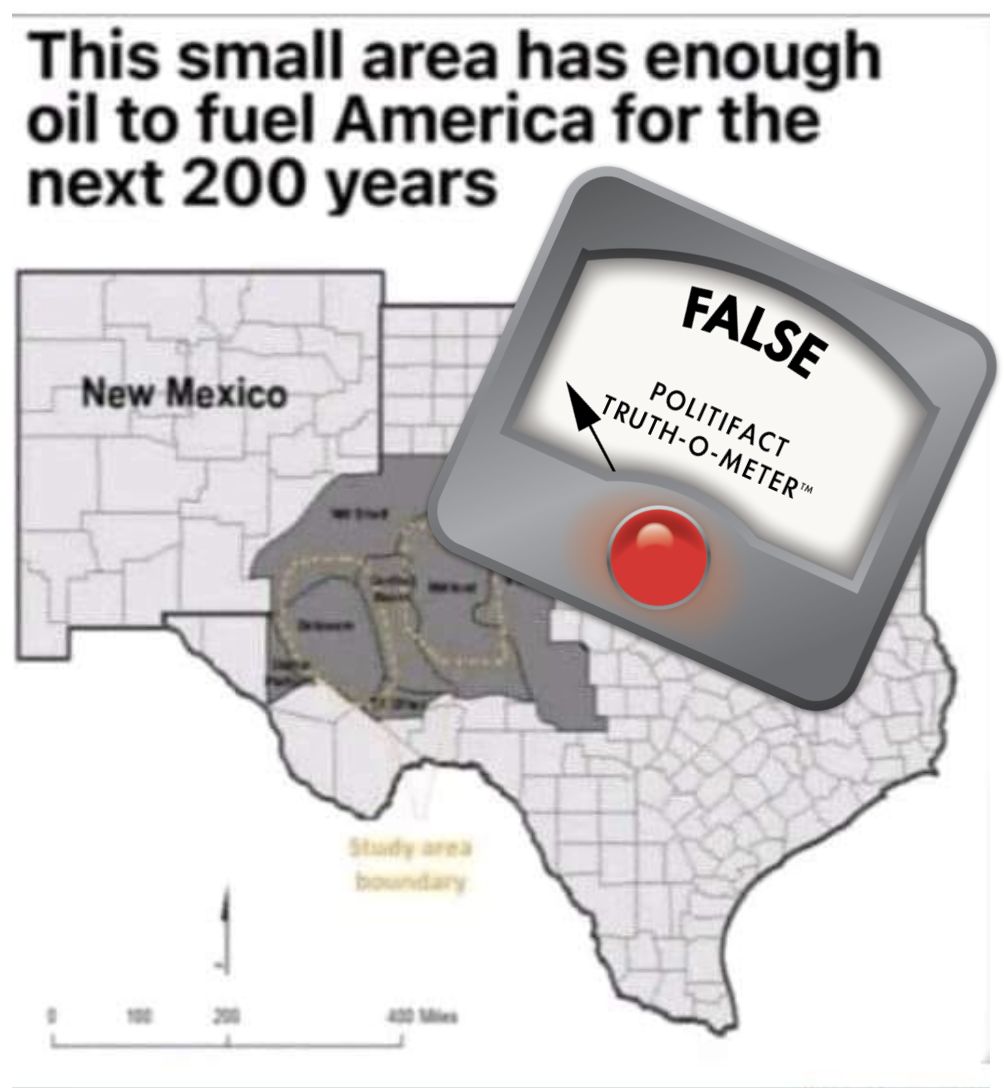 With oil prices peaking at $130 a barrel in March 2022, and Americans having recently paid over $5 per gallon at the pump, America’s energy resources have been a focus for politicians and citizens alike. The Permian Basin, which produces over 5 million barrels of oil a day, according to the U.S. Energy Administration, seems like a promising supply.

The wealth of America’s most productive and largest oil basin lies in deep layers of shale deposits that have become accessible in the last two decades with the rise in horizontal fracking. Fracking, short for hydraulic fracturing, involves drilling deep into the earth, first vertically and then horizontally, along layers of oil-rich rock. Pressurized water and chemicals are then pumped deep into the well, creating fractures through which oil and gas can escape.

The Permian, which is broken into regions, is routinely assessed by the U.S. Geological Survey. The USGS measures "technically recoverable" resources — "oil and/or gas (that) can be produced using currently available technology and industry practices," regardless of economic or accessibility factors.

In 2018, the survey estimated there were 46.3 billion barrels of undiscovered, technically recoverable continuous oil in the Permian’s Delaware Basin; the estimate, at the time, doubled proven reserves. Estimates from the Midland Basin and Spraberry Formation add another 24.2 billion barrels to the region’s reserves, and a 2007 assessment identified 747 million barrels that could be recovered with conventional drilling.

This abundance of natural resources rivals the famed oil fields of the Middle East, according to Bloomberg News.

But experts warn that assessing the natural resources beneath our feet is not simple. "A resource assessment like those from USGS is not an estimate of how much oil will ultimately be produced. It is an estimate of what is technically recoverable, and it has a wide range of uncertainty around it," said Kenneth Medlock, senior director of the Center for Energy Studies at Rice University.

Additionally, assessments are constantly being updated and revised. "The underground is as living as the human eye. It's a very organic space," said Deborah Gordon, who leads the Oil and Gas Solutions Initiative at the Rocky Mountain Institute. Estimates are not definitives or absolutes, but rather a snapshot of the current moment. "It's almost like having a doctor say, ‘I'm healthy today, but that doesn't mean I'm healthy tomorrow.’"

And just because oil is technically recoverable does not mean it will be recovered. What matters more, experts say, is whether the oil is economically recoverable — meaning that the price of oil would render that extraction profitable.

"Never is all of the oil extracted from any basin because economically, it is not feasible," Medlock said. "That is why wells are plugged – they get too costly to continue producing."

Constantly shifting economic factors — including the cost of production, price of oil and technological developments — dictate how much oil is produced, Gordon said, not the sheer availability of resources: "The big question is, what's the future price of oil and gas?" And, she said, will it allow the Permian’s carbon bounty to remain economically recoverable?

Even if we were to factor out the complexity of fluctuating estimates, changing economic conditions and advancing technology, the numbers still don’t add up to what is claimed in this Facebook post.

According to the Energy Information Administration, the U.S. consumed 7.22 billion barrels of petroleum in 2021. Continuing at that rate of consumption, the estimated 71 billion barrels would last only 10 years. A 200-year supply would require closer to 1.45 trillion barrels — far beyond current estimates for the region.

An image on Facebook claimed that a "small area" in western Texas and southeastern New Mexico "has enough oil to fuel America for the next 200 years."

The Permian Basin is indeed a large and valuable source of domestic oil and natural gas. But based on the latest geological assessments and U.S. energy consumption, estimated oil in the Permian would not last Americans 200 years.

U.S. Energy Information Administration, "How much oil is consumed in the United States?" March 9, 2022

U.S. Energy Information Administration, "What countries are the top producers and consumers of oil?" May 10, 2022

U.S. Geological Survey, "Assessment of Undiscovered Oil and Gas Resources in the Spraberry Formation of the Midland Basin, Permian Basin Province, Texas," May 2017

Bloomberg, "Why the Global Oil Market Hinges on Five US Counties," March 24, 2022