Facebook posts
stated on August 2, 2022 in a Facebook post:
Former President Donald Trump asked “for troops around the Capitol to make sure everyone is safe,” on Jan. 6, 2021, but was “turned down by the Democrats.”

A video of former President Donald Trump speaking during a rally near the White House on Jan. 6th, is shown as the House select committee investigating the Jan. 6 attack on the U.S. Capitol holds its first public hearing on June 9, 2022. (AP)

The House select committee investigating the Jan. 6, 2021, attack on the U.S. Capitol has highlighted former President Donald Trump’s actions — and inaction — as rioters stormed the Capitol building that day. So far, sworn testimony by Trump administration officials has portrayed Trump as uninvolved and uninterested in keeping order.

"The item that the MSM keeps under wraps is the Trump memo to provide troops for a ‘peaceful’ protest on January 6th," said the Aug. 2 post. "So Trump asks for troops around the Capitol to make sure everyone is safe, but he gets turned down by the Democrats. So how does one cause an insurrection when they asked for troops for protection?" 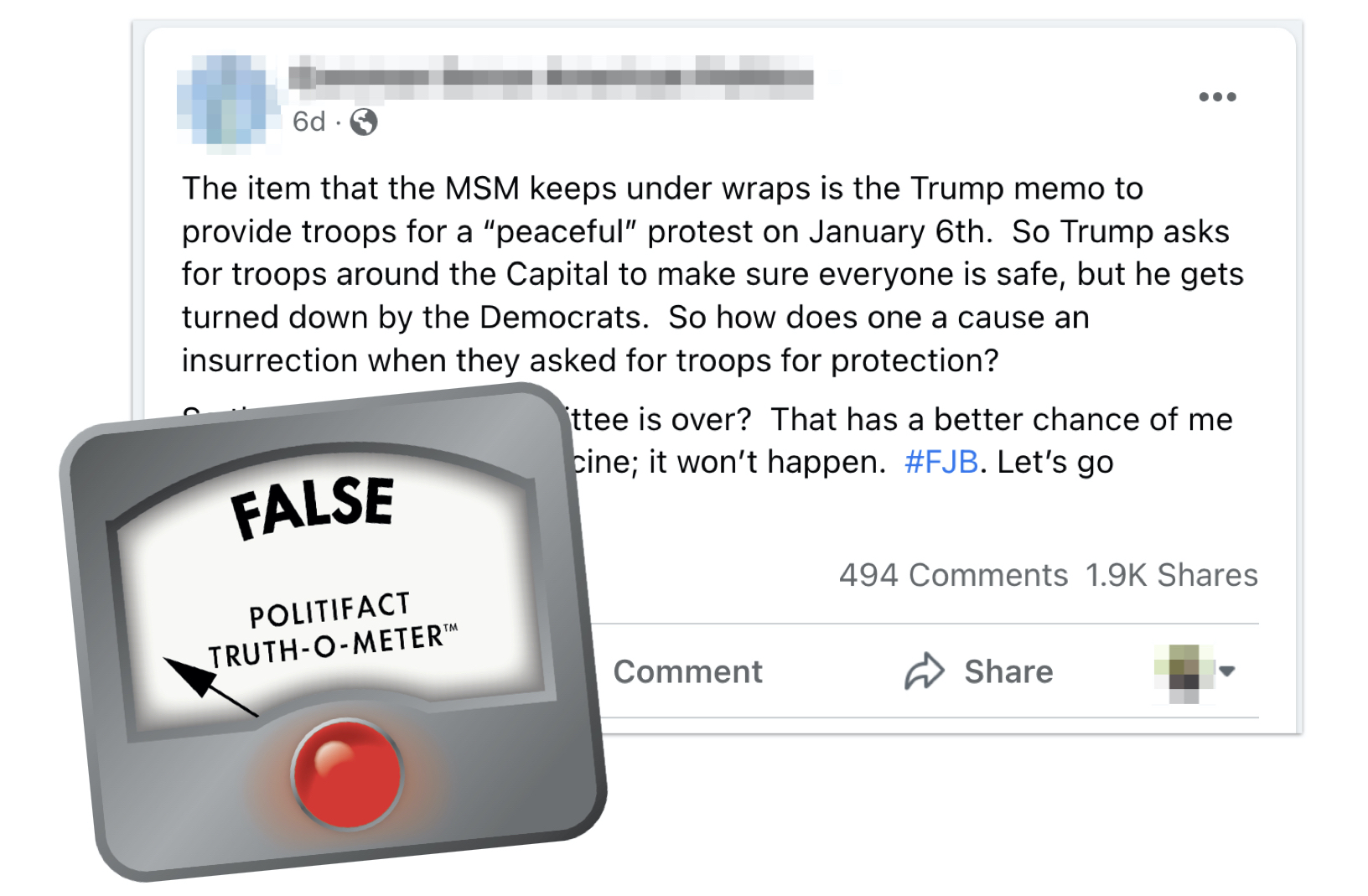 The House select committee investigating the Capitol attack plans to reconvene in September, but the hearings have already revealed plenty of information — none of which corroborates claims that former President Donald Trump requested thousands of National Guard troops be deployed to ensure peace on Jan 6.

No record of Trump requesting troops for Jan. 6

A president has the authority to activate the D.C. National Guard. (National Guard troops from states and territories are under the command of governors, although a president can also call them into federal service.)

There is no record of Trump authorizing thousands of National Guard troops for the U.S. Capitol before the attack and no evidence that Democrats denied such a request.

Christopher Miller served as acting defense secretary on Jan. 6, 2021. In a recorded deposition shared by the House committee investigating the attack, Miller said that Trump never gave an order to have National Guard troops ready.

To remove any doubt: Not only did Donald Trump fail to contact his Secretary of Defense on January 6th (as shown in our hearing), Trump also failed to give any order prior to January 6 to deploy the military to protect the Capitol.

Miller told the House committee that he formally approved a request from D.C. Mayor Muriel Bowser for "unarmed D.C. National Guard support" for planned demonstrations on Jan. 5 and Jan. 6, 2021.

"We received no further request for different or additional support until the Capitol was breached," Miller said. Ryan McCarthy, who was the U.S. Army secretary on Jan. 6, has also said Bowser’s request was the only one his office received before the attack.

Miller told Vanity Fair that a few days before Jan. 6, during a meeting on an unrelated topic, Trump asked him how many troops the Defense Department planned to have on Jan. 6. Miller said he told Trump the plan was to provide National Guard support as requested by the District of Columbia. In response, Trump reportedly said, "You’re going to need 10,000 people."

Former White House Counsel Pat Cipollone testified that he was unaware of Trump making any phone calls to the defense secretary, attorney general or homeland security secretary on Jan. 6.

Former Vice President Mike Pence’s national security adviser, Gen. Keith Kellogg told committee investigators that he never heard Trump ask for the National Guard or a law enforcement response. When asked by the committee whether he would have known if troops were to be present or called up for a rally near the Capitol, Kellogg said: "Yeah, I would have." 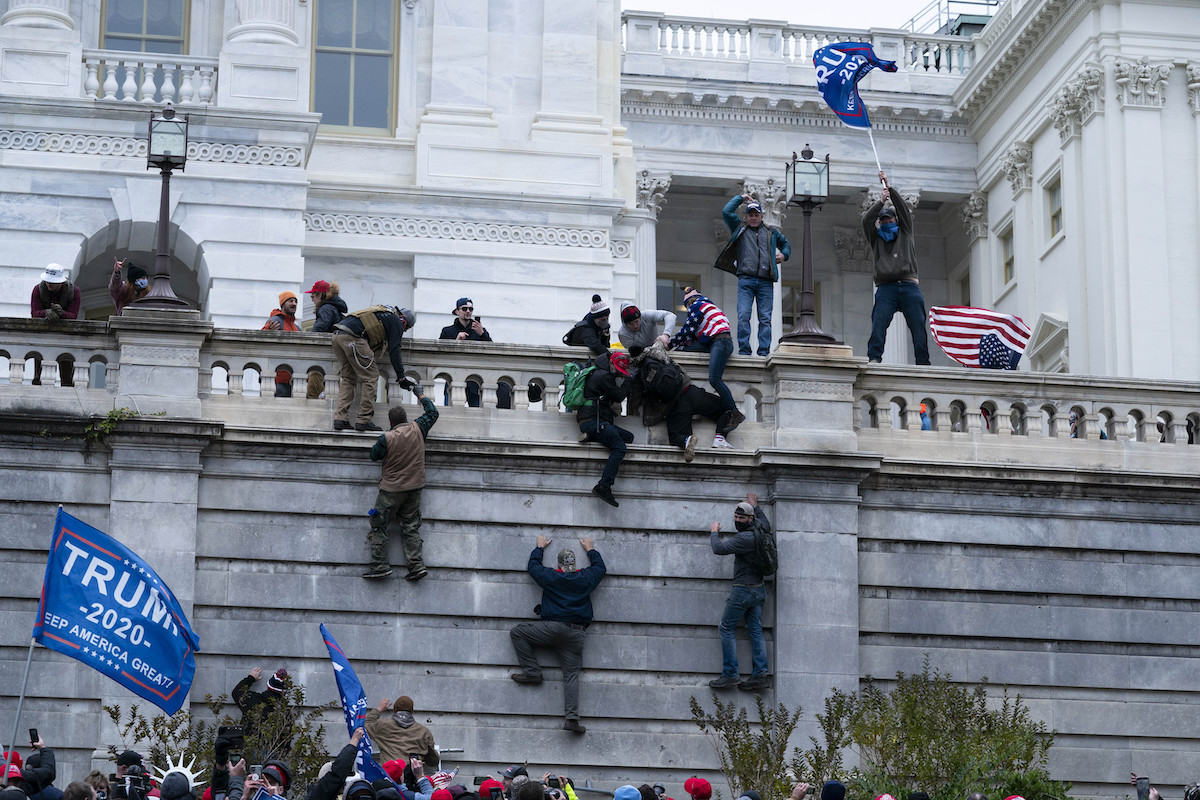 Supporters of President Donald Trump climb the west wall of the U.S. Capitol on Jan. 6, 2021, in Washington. (AP)

Democrats did not reject request for troops

Trump, Fox News Host Sean Hannity and others have accused House Speaker Nancy Pelosi, D-Calif., of thwarting the former president’s alleged effort to protect the Capitol. But she would not have had the power to do so.

Members of Congress don’t have the authority to activate the D.C. National Guard, said Jane L. Campbell, president and CEO of the U.S. Capitol Historical Society, a nonprofit and nonpartisan educational organization.

"If the president calls the National Guard to the U.S. Capitol, no congressional official has the authority to decline its service," she said.

A Facebook post said Trump asked "for troops around the Capitol to make sure everyone was safe," on Jan. 6 but was "turned down by the Democrats."

There’s no record that Trump requested or authorized a request that thousands of National Guard troops be deployed "around the Capitol" on Jan. 6. There’s also no evidence that Democrats turned down such a request.

RELATED: What’s next for the Jan. 6 Committee?

RELATED: No proof Trump requested 10,000 Guard troops for Jan. 6 or that Pelosi denied it

Vanity Fair, "‘The president threw us under the bus’: embedding with pentagon leadership in Trump’s chaotic last week," Jan. 22, 2021

CBS News, "Pence gave ‘direct’ and ‘unambiguous’ orders to have military come to the Capitol," July 21, 2022

U.S. Department of Defense, "Planning and execution timeline for the National Guard’s involvement in the January 6, 2021 violent attack at the U.S. Capitol," Jan. 8, 2021

U.S. Senate, "Examining the U.S. Capitol attack: A review of the security, planning and response failures on January 6," June 1, 2021