Institute for Energy Research
stated on April 16, 2021 in an article:
“Conventional generators are very thin right now because Texas has gone to so many renewables.”

Wind turbines are shown on July 29, 2020, near Sweetwater, Texas. (AP/Gutierrez)

In mid-April, the Texas power grid was faced with a dilemma that looked dangerously familiar to the conditions that led to the February blackouts during the deadly winter freeze: Electricity supply was struggling to keep up with demand.

The Electric Reliability Council of Texas assured Texans that the mid-April tightness in the energy market wouldn't lead to any widespread blackouts, but the situation produced more questions about the grid’s overall reliability. In a reprise of the blame casting that occurred in the aftermath of the February blackouts, many observers pointed fingers at the state’s renewable energy generators.

"Conventional generators are very thin right now because Texas has gone to so many renewables," Institute for Energy Research CEO Robert Bradley told the Houston Republic, a website within the network of pay-for-play local news sites owned by Metric Media.

The Houston Republic article, published April 16, was one of many that began appearing on Metric Media websites targeting renewable energy. Another Metric Media article, based on comments from a renewable energy subsidy opposition group, ran the same day with the headline: "Texas was once again at the mercy of wind generation — and it did not come through."

Several of these articles were pushed to online audiences via paid promotion on Facebook.

Investigations from The New York Times and Colombia Journalism Review have identified Metric Media as a network of sites masquerading as local news. Over 1,300 sites have been launched across the nation, including 74 in Texas. According to the investigations, the media company accepts payment from clients, most with a conservative viewpoint, in exchange for tailor-made news articles.

"The sites appear as ordinary local-news outlets, with names like Des Moines Sun, Ann Arbor Times and Empire State Today. They employ simple layouts and articles about local politics, community happenings and sometimes national issues, much like any local newspaper," the Times reported. "But behind the scenes, many of the stories are directed by political groups and corporate P.R. firms to promote a Republican candidate or a company, or to smear their rivals."

It’s unclear what money, if any, is behind the April 16 articles published in Texas. A spokesperson for the Institute for Energy Research said that the group’s leadership is unfamiliar with Metric Media, "which probably means no payments have been made." The article’s author, Juliette Fairley, declined an interview and forwarded questions to a Metric Media editor, who did not respond.

The institute declined to identify its donors, saying disclosure is against its policy. According to Republic Report, a site that tracks how money influences policy decisions, the Institute for Energy Research was founded in 1989 from the remains of the Institute for Humane Studies – Texas, a defunct non-profit for which Charles Koch served as a founding director. Koch, chairman and CEO of the refining and chemicals company Koch Industries and a benefactor of many conservative causes, is not on the institute's board.

Bradley’s comments, and those of other interest groups, appear at a time when Texas legislators are sorting through a variety of policy fixes — some large, some small. Ultimately, Bradley said he hopes to see policies that limit the proliferation of renewables in the Texas grid.

"We need a lot less wind and a lot more natural gas and even coal," he told the Houston Republic. "There have been coal retirements and some of those ought to probably come back for the summer. Texas has reached the limit of our renewable dependence. There certainly should not be any more wind or solar for the grid."

But is it accurate to attribute Texas’ mid-April energy crunch to renewable sources? We found that there are two ways of answering this question, by looking at the direct and indirect causes.

What happened in April?

Energy demand in Texas regularly peaks in the summer and winter months, but not during spring and fall when temperate weather slackens demand. This makes the fall and spring seasons prime time for generators to go offline for repairs and maintenance. The Electric Reliability Council of Texas requires all generators to complete these check-ups by May 15, before demand begins to ramp up in the hot summer months.

During an April 13 ERCOT board meeting, then-grid CEO Bill Magness explained that "we have a number of units that are appropriately doing their maintenance so that they’re ready for the summer."

About 32,000 megawatts of power from thermal energy sources — mostly natural gas power plants — were offline on April 13, according to forecasted outage data posted to ERCOT’s website. That’s about half of the grid’s full thermal fleet offline due to maintenance.

During the board meeting, Magness also explained another unexpected factor behind the grid’s plea for energy conservation that day: a weather front that stalled over the western part of the state.

As Magness explained: The weather system "has been moving hesitantly through the ERCOT system for the past several days, which has impacts not only on raising or lowering temperature, but also on cloud cover that affects solar, changes in the weather that affects wind and what we can expect from wind (turbines). So those sorts of systems add a lot of volatility to forecasting the demand in the supply-side." 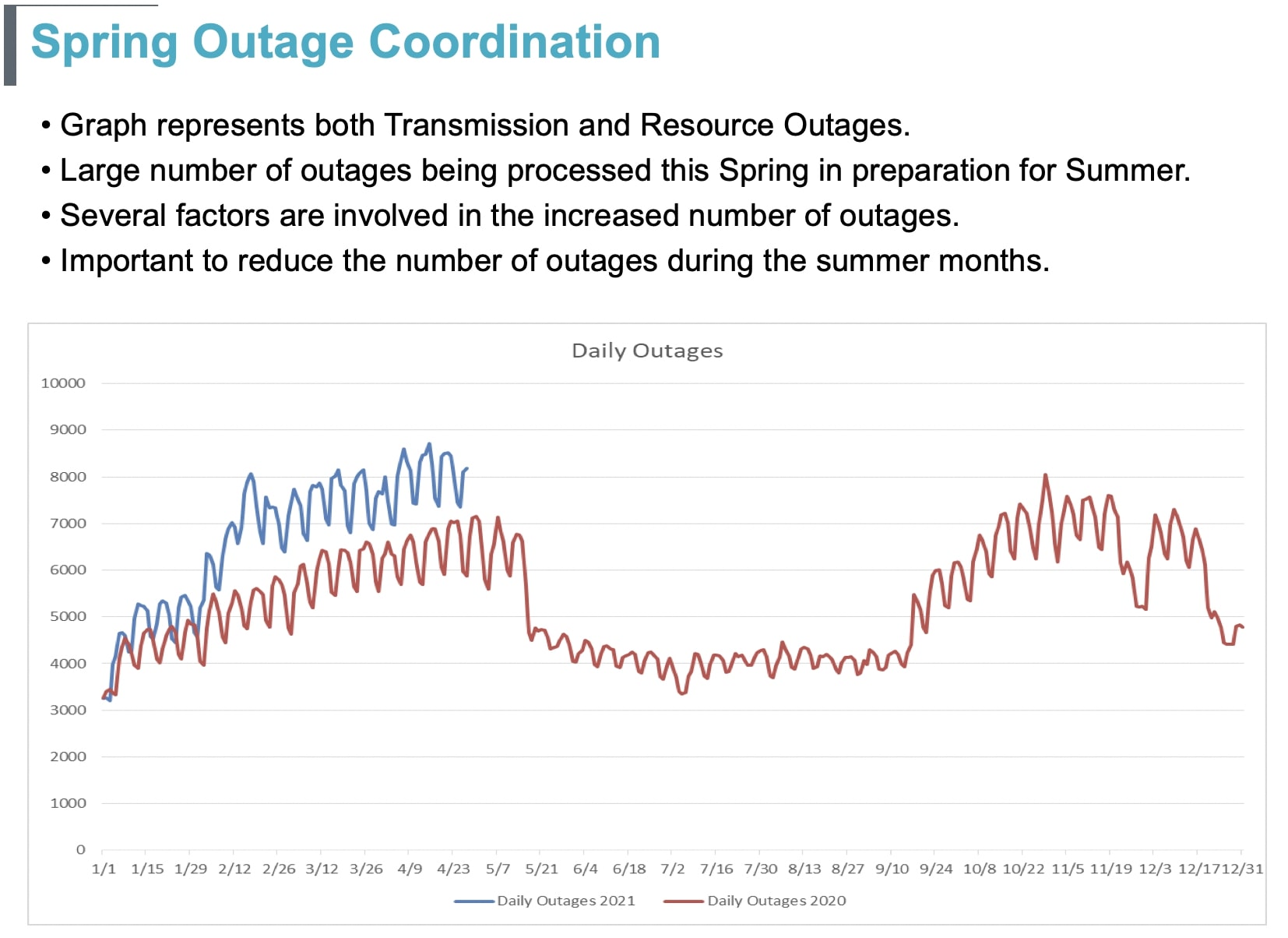 To Josh Rhodes, an energy researcher at the University of Texas, attributing the tight reserves on April 13 to renewable energy alone ignores other key factors.

"It's easy to point to something like that and leave off the fact that half of our thermal fleet was down," Rhodes said.

"The weather isn’t totally to blame for the power supply issues, of course," Bruins wrote. "The large number of units that are offline for maintenance following the winter storm is also driving this shortage."

Bradley, a fellow at the Institute of Economic Affairs in London and an adjunct scholar at the Cato Institute and the Competitive Enterprise Institute, said in an email that he stands by his statement. The mid-April energy shortfall, he said, can be explained by the impact renewable energy proliferation has had on the economics of thermal energy generators.

Wind and solar generators in Texas certainly have enjoyed support from federal subsidies, in particular the production tax credit, which provides a tax credit of 1 cent to 2 cents per kilowatt-hour for renewable developers, and the investment tax credit, which reimburses developers up to 30% of their capital costs.

The market share these renewable generators have gained has proportionately reduced the share of traditional thermal generators. While wind, for instance, has increased from 3% of the state’s energy mix in 2007 to 23% in 2020, coal has dropped from 37% to 18% over the same time period, ERCOT data shows. Natural gas has remained steady, having increased slightly from 44.5% in 2007 to 46% in 2020.

"In the absence of renewables (in a free market), we would have a lot more reliable generation—some combination of capacity that would not have been retired and some new capacity. So even with scheduled maintenance (known to ERCOT) and the renewable drop-off (a surprise but not really), we would have had a thick market (as before renewables)," he said.

The New York Times investigation reported that while Metric Media sites "generally do not post information that is outright false, the operation is rooted in deception, eschewing hallmarks of news reporting like fairness and transparency."

That modus operandi appears to be at play here too.

There’s a kernel of truth to Bradley’s statement — renewable energy did falter in April due to weather patterns, and renewable energy has had an indirect impact on thermal energy investments. But the Houston Republic article only focuses on these elements while ignoring the fact that nearly half of the state’s natural gas fleet was offline on April 13 for maintenance.

Editor's note: This article was updated to correct Charles Koch’s role in the founding of the Institute for Energy Research.

Houston Republic, Institute for Energy Research CEO: Adding 'unreliable' wind, solar is 'at the expense of the reliables,' April 16, 2021

Austin News, Energy Alliance policy director: 'Texas was once again at the mercy of wind generation – and it did not come through,' April 16, 2021

Emails with Robert Bradley, Institute of Energy Research CEO, May 5, 2021

Ted Cruz
stated on August 4, 2021 an interview:
“In the last several months, the Biden administration has released over 7,000 illegal aliens who were COVID positive just in one Texas city.” Biden's border policies are "endangering not just the people of Texas, but people all across the country."

Dan Patrick
stated on August 19, 2021 an interview:
"Democrats like to blame Republicans on (low vaccination rates). Well, the biggest group in most states are African Americans who have not been vaccinated. The last time I checked, over 90% of them vote for Democrats."

Ken Paxton
stated on August 7, 2021 an interview:
The Biden administration is “not even testing these people” being released by Border Patrol into the U.S.

Chip Roy
stated on July 29, 2021 a hearing:
A quorum-breaking Texas Democrat said in 2007 that mail-in ballot fraud “is the greatest source of voter fraud in this state.”

Texas GOP
stated on July 20, 2021 a fundraiser:
“Seventy four thousand... That’s how many mail-in ballots were recently found in Arizona that have NO clear record of being sent in.”

Ted Cruz
stated on July 13, 2021 an interview:
"There is clear legal authority to handcuff and put in leg irons legislators that are trying to stop the legislature from being able to do business."

Tucker Carlson
stated on June 28, 2021 a show:
“In Texas, the power companies have automatically raised the temperature of people's thermostats in the middle of a heatwave without their permission."

Greg Abbott
stated on June 16, 2021 a press conference:
“Carnage" is being caused "by people who are coming across the border."

Matthew Rosendale
stated on June 16, 2021 a tweet:
The intent behind the bill recognizing Juneteenth as a federal holiday "is to replace the Fourth of July.”

George P. Bush
stated on June 9, 2021 an interview:
“We see an uncompleted wall that was duly appropriated dollars during the Trump days to build over 700 miles. Only 150 miles were constructed.”

Chip Roy
stated on June 3, 2021 an interview:
Says Austin should be putting more police on the streets. “Why are we going the other way? (Austin leaders are saying) ‘Oh, let’s reimagine police by getting rid of them.' What do you have? You have a doubling of murder in Austin, Texas.”

Don Huffines
stated on May 10, 2021 campaign material:
"Texans have some of the highest property taxes in the nation”

Lauren Boebert
stated on May 19, 2021 an interview:
“Since removing the mask mandate two months ago, Texas has not reported a single COVID death. Not one."

Ted Cruz
stated on May 11, 2021 a meeting:
The voting rights bill “would register millions of illegal aliens to vote. It is intended to do that.”