More than a year into the COVID-19 pandemic, misinformation is still spreading online about the  tests used to diagnose whether someone has the infection.

The latest claim comes in the form of a photo circulating on Instagram, which appears to show two packages of SARS-CoV-2 antigen test swabs, with one labeled as a "positive control swab" and the other a "negative control swab." (Antigen tests detect the presence of a specific viral antigen, which implies current viral infection.)

"Nothing to see here folks!" reads the post’s caption. "It’s perfectly NORMAL to have PCR TESTS that are labelled ‘Positive’ and ‘Negative!’ There’s no conspiracy involved at all! They aren’t trying to manipulate and control the test results in any way! Trust your leaders."

Text overlaid along the bottom of the photo says: "Picture taken secretly by a nurse on shift. Name not mentioned for obvious reasons." 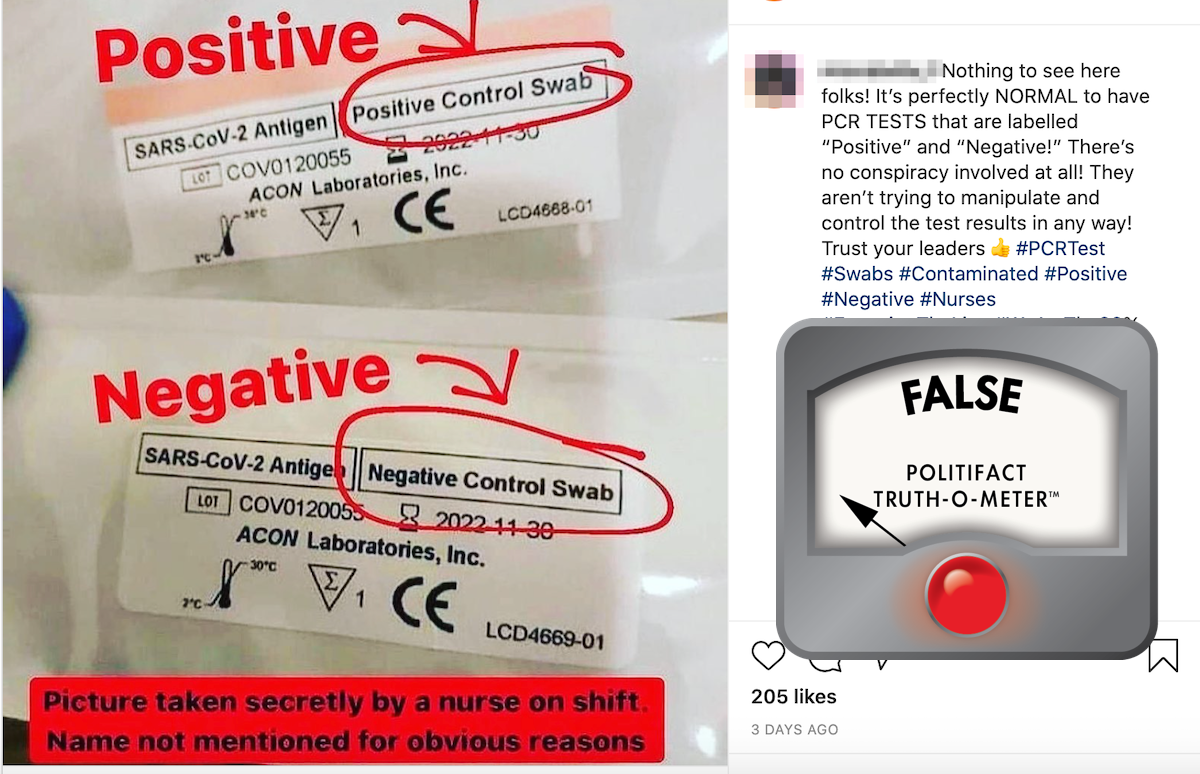 (Screenshot from Facebook)
The image is authentic, but it doesn’t prove what the user claims. The key word in the label is "control," because the swabs seen are used for quality control to make sure the test is working correctly, not for patient testing. It says so in the instructions.
The post was flagged as part of Facebook’s efforts to combat false news and misinformation on its News Feed. (Read more about our partnership with Facebook.)
The test packages come from ACON Laboratories, a medical equipment company based in San Diego. Among the different types of COVID-19 tests it sells, ACON Laboratories has an antigen rapid test called the "Flowflex."
The Flowflex test’s documentation lists the materials provided in each kit, which includes both positive and negative control swabs, as well as the nasal swabs used for patient testing.

(Screenshot from ACON Laboratories documentation.)
The test’s instruction manual says that the control swabs "should be used to ensure that the test cassette and that the test procedure is performed correctly."

(Screenshot from FlowFlex instruction manual.)
Other medical equipment companies, like Abbott, produce tests that include control swabs for the same reason.
In the documentation for its Panbio COVID-19 antigen rapid test kit, for example, Abbott also lists the negative and positive control swabs and specifies they are not to be used for "specimen collection" and are for "control use only."
Our ruling

An Instagram post suggests that COVID-19 tests are fixed because a photo shows two packages of antigen testing kits with the labels "positive control swab" and "negative control swab."

This is a misinterpretation of the labels. Positive and negative control swabs are routinely included in testing kits for quality control — to ensure that the test is working correctly — not for patient testing.

We rate it False.