As Election Day nears, online posts are making unsubstantiated, disputed claims about Mark Kelly, the Democratic candidate in the Arizona race for the U.S. Senate.

Kelly’s campaign said the claims about Kelly are false.

"These aren’t pictures of Mark, and he never dressed up in such a costume," Kelly’s campaign manager Jen Cox said in a statement. "The story is false and should be retracted immediately, and those who have spread this misinformation online should delete it. Anyone using it to try to smear a combat veteran should be ashamed of themselves."

Kelly is an astronaut and a retired U.S. Navy Captain who graduated from the U.S. Merchant Marine Academy in 1986. He is seeking to unseat Republican Sen. Martha McSally. The Arizona seat is one of 18 pivotal House and Senate races PolitiFact is tracking in 2020.

The Facebook post was flagged as part of Facebook’s efforts to combat false news and misinformation on its News Feed. (Read more about our partnership with Facebook.)

The National File story claimed it "obtained a series of photos from the 1986 yearbook of Mark Kelly … which show him dressed as Nazi dictator Adolf Hitler for a Halloween party while attending the Merchant Marine Academy."

The story includes a black-and-white photo of a man below what appears to be a Halloween banner, standing next to other people in costume (a woman dressed as a crayon, and men dressed as a pirate, a fencer, and a tourist). The man has a "toothbrush" mustache, wears dark sunglasses, a long sleeve dress shirt and dark tie, along with an armband with what appears to be a swastika symbol. The photo does not include a yearbook caption, and it doesn’t say it’s Kelly. The story does not have any quotes from anyone confirming Kelly is in the picture.

John McCain
stated on January 27, 2016 in a committee hearing
"Today Russia holds many of our most precious national security satellites at risk before they ever get off the ground."

The story has a picture that it says shows Kelly’s full yearbook page and says that page includes "a photo of him wearing what appear to be the same pair of sunglasses used in the Hitler costume." The yearbook page does not include the picture of the man in the costume, nor any reference to the Halloween event. It also does not confirm that the pair of sunglasses are the same or that Kelly is the one in the costume.

The story claims that the Halloween event "was covered heavily in the yearbook" but provides no evidence that such coverage said Kelly dressed up as Hitler. 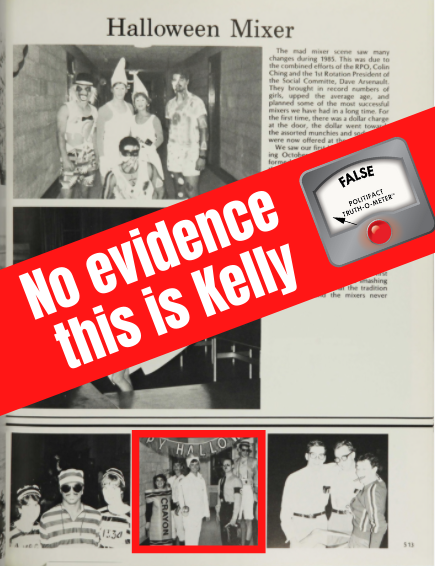 One of the classmates we spoke to, Ed McDonald, said he is the man dressed as a pirate. Another, Bob Kennedy, said he’s the one dressed in a fencing outfit. They both said the picture shows people who were part of the 2nd Company, and that Kelly was not part of that company.

"I can confirm without a doubt that Mark Kelly was not in the photo," Kennedy said.

Howley, when challenged about his story, said on Twitter, "NO ONE has provided any name of an identical student who could have dressed as Hitler. Not smart!"

Let’s line up the evidence.

On one side we have an uncaptioned black-and-white photo that a conservative website says is Kelly, but the only evidence presented is that the person had sunglasses similar to Kelly.

On the other are Kelly’s classmates who have gone on the record to say that Kelly is not the person in the picture. We spoke with two people who say they were in the photo in question, and that Kelly wasn’t.

At PolitiFact, the burden of proof is on the speaker. These claims fall short. We rate the posts False.