Viral image
stated on May 9, 2020 in a Facebook post:
The United Nations’ “new world order” agenda will create one world government with one world military and the end of national sovereignty.

A May 9 Facebook post is claiming that the United Nations is planning to create "one world government" by 2030. Under the vision, the post says, private property is banned and family units are destroyed.

The post shares a photo of what looks like a document titled "New World Order UN Agenda 21/2030." It includes a purported list of 25 goals that the United Nations aims to achieve by 2030.

"This is not a conspiracy theory," the caption says. It suggests the document can easily be found on the internet.

"If you don’t believe it, a simple google search will take you to the UN website where you can access the document and read it for yourself. It is amazing (not) how well the Covid-19 plandemic ties in with Agenda 21/2030." 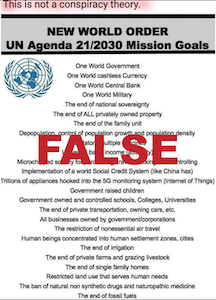 Among the agenda items listed on the document depicted in the post is the end to all national sovereignty, private property and single-family homes; government control of businesses, schools and child-rearing; and "the end of the family unit."

This post was flagged as part of Facebook’s efforts to combat false news and misinformation on its News Feed. (Read more about our partnership with Facebook.) It has racked up thousands of shares on Facebook and Twitter

A United Nations spokesperson told PolitiFact that the document and the agenda it outlined is false. "This is not an authentic U.N. document," the spokesperson said in an email. (AFP and BuzzFeed have previously fact checked this photo and deemed it false.)

"Agenda 21" is a non-binding plan of action that was created at the U.N. Conference on Environment and Development in 1992 in Rio de Janeiro. It examines the connection between environmental, social and economic issues affecting communities world-wide, and proposes solutions for sustainable development and combating poverty, with private-sector involvement. It calls for strengthening the role of women, local leaders, workers, farmers, entrepreneurs and even private business and industry in promoting sustainable development.

The 2030 Agenda for Sustainable Development was adopted by each country in the U.N. in 2015. The agenda includes 17 sustainable-development goals that are to be achieved over 15 years, including ending poverty and hunger, achieving gender equality, combating climate change, and ensuring access to clean water and affordable energy.

There are some common threads between the goals in the 2030 U.N. plan and what’s listed in the Facebook post, but in each case, the post exaggerates or distorts them.

For example, the U.N.’s 2030 agenda proposes a goal of reducing the rates of child and maternal mortality in every country. This goal supports research and development of vaccines and medicines for diseases primarily affecting developing countries, according to the U.N. But it doesn’t call for "mandatory multiple vaccines" or "the ban of natural non synthetic drugs and naturopathic medicine" as the Facebook post claims.

Similarly, the U.N. agenda advocates for free, suitable and quality primary and secondary education and lifelong learning opportunities. But it says nothing about "government owned and controlled schools."

The U.N. agenda includes ensuring universal access to "affordable, reliable, sustainable and modern energy," not the end of private transportation or fossil fuels, as the Facebook post says.

The caption on the post invokes the term "plandemic" to suggest that the COVID-19 crisis is aligned with the purported U.N. agenda. "Plandemic" is the title of a 26-minute video airing various conspiracy theories about the COVID-19 crisis. PolitiFact fact-checked eight of the most misleading claims in the video, which Facebook and YouTube removed.

We also fact-checked another doctored United Nations document in 2013 that claimed a civilian gun confiscation plan was in the works in the United States, and was created through Agenda 21. We rated it Pants on Fire.

A photo posted to Facebook claims the United Nations is creating a "new world order" that would initiate a one world government, one world military and the end of national sovereignty, among a list of agenda items.

The list alludes to a real action plan, Agenda 21, that was created in 1992, and the 2030 Agenda for Sustainable Development, which introduced 17 goals. Those action plans were created to end poverty and inequality, not to create a totalitarian government. They are also nonbinding.

Some of the post’s listed goals seem to link to the 17 goals introduced by the U.N., but they exaggerate or manipulate the meaning and proposed outcomes of the action plans.

PolitiFact, Fact-checking ‘Plandemic’: a documentary full of false conspiracy theories about the coronavirus, May 7, 2020

BuzzFeed, An Old Conspiracy Theory Known As "Agenda 21" Has Been Rebooted by the Coronavirus Pandemic, April 4, 2020

Carol Miller
stated on July 30, 2020 a tweet:
“In West Virginia alone, overdoses have increased by 50% during the #COVID-19 pandemic.”

Facebook posts
stated on August 2, 2020 a post on Facebook:
Says Anthony Fauci, Bill Gates, George Soros and Jeffrey Epstein are connected with Moderna, Inc., and its efforts to create the coronavirus vaccine.

Jim Justice
stated on July 27, 2020 a press conference:
West Virginia is the state with the oldest population.

West Virginia Democratic Party
stated on July 10, 2020 a tweet:
“Under the leadership of @WVGovernor Justice, West Virginia now has the highest rate of COVID-19 spread from person to person than any other state.”

Viral image
stated on May 9, 2020 a Facebook post:
The United Nations’ “new world order” agenda will create one world government with one world military and the end of national sovereignty.

Facebook posts
stated on April 3, 2020 on social media:
In 1986, the founder of the Times Square Church prophesied that he saw “a plague coming on the world and the bars and church and government will shut down,” with New York City especially hard hit.

Facebook posts
stated on March 31, 2020 posts on the Internet:
If you ask Amazon’s Alexa about the origin of the coronavirus pandemic, it says “the government planned” it.

Instagram posts
stated on March 17, 2020 social media posts:
“While all COVID-19 news has been going on, the U.S. Government has been sneakily trying to remove end-to-end encryption” which means “the government will be able to see all of your messages and listen to all of your calls.”

Facebook posts
stated on March 18, 2020 on social media:
Says “Senator Joe Manchin hit (an) all time low saying seniors and the disabled did not need the relief package $1000 on Fox News.”

Bernie Sanders
stated on June 12, 2019 a speech at George Washington University:
"In 2014 ... in McDowell County, W.Va., one of the poorest counties in the nation, life expectancy for men was 64 years. In Fairfax County, Va., a wealthy county, just 350 miles away, life expectancy was nearly 82 years, an 18 year differential. The life expectancy gap for women in the two counties was 12 years."