Ted Cruz
stated on April 28, 2017 in a speech to the National Rifle Association:
"The first Congress passed a law mandating that every able-bodied man must own a musket."

To whoops and applause, Ted Cruz told National Rifle Association members there was a time that Congress required men to own guns.

In his April 28, 2017, speech, which the association live-streamed on Facebook, the Texas Republican pointed out that muskets were vital in American revolutionary times and "what everybody carried into combat."

"Anyone know the first gun control laws in the United States?" Cruz went on. "The first Congress passed a law mandating that every able-bodied man must own a musket. That’s gun control Founding Fathers’ style."

After unsuccessfully seeking Cruz’s historical backup, we turned to a George Washington University historian, Kenneth Russell Bowling, who told us by phone he was fresh off contributing to the publication of 22 volumes of papers related to the earliest years of Congress.

Bowling said Cruz was likely reflecting on a measure passed into law by the nation’s second Congress in 1792.

To get a fix on that, Bowling suggested that we consult record-keepers at the Library of Congress where, by email, a librarian who went unidentified pointed us to documentation of the Second Militia Act of 1792, approved by Congress on May 8, 1792 — six days after passage of the Militia Act of 1792 (which was repealed in 1795) giving the president authority to call out state militias to repel U.S. invasions and to do so in the case of state insurrections at the request of state officials or on approval of a federal district judge or an associate justice of the Supreme Court.

The second act required "each and every free able-bodied white male citizen" aged 18 through 44 to enroll in his state militia within the next year with the exception of the vice president, other federally elected officials and specified workers such as  "all ferrymen employed at any ferry on the post road" as well as individuals exempted by state laws. Commanders were to continue enrolling eligible men in coming years, the law said.

Per Cruz’s claim, the law said every enrolled man "shall within six months thereafter, provide himself with a good musket or firelock, a sufficient bayonet and belt, two spare flints and a knapsack, a pouch with a box therein to contain not less than twenty-four cartridges, suited to the bore of his musket or firelock, each cartridge to contain a proper quantity of powder and ball..." 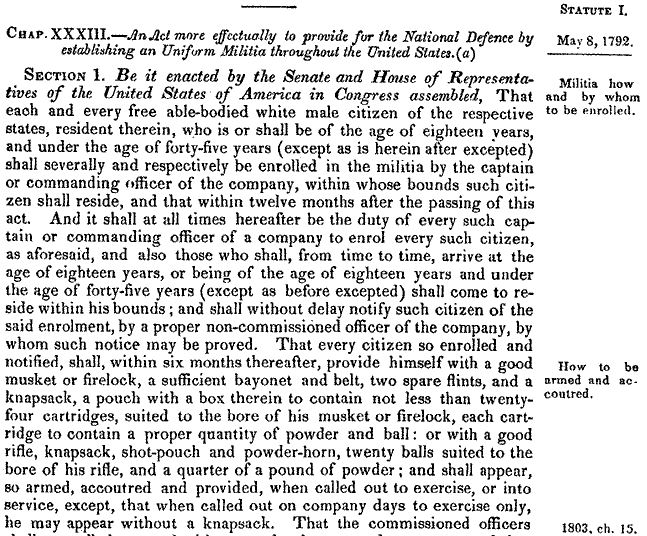 Cruz said: "The first Congress passed a law mandating that every able-bodied man must own a musket."

Action by the nation’s second Congress wasn’t that far-reaching. The law required states to create militias to be staffed by some able-bodied white men aged 18 through 44 who were to provide their own muskets and other supplies. Excused from militia service: Officials ranging from the vice president to certain workers and also anyone exempted by a state.

PolitiFact Rating:
Half True
"The first Congress passed a law mandating that every able-bodied man must own a musket."
Ted Cruz
U.S. senator for Texas

Definition of "forelock,"  "The New American Encyclopedic Dictionary: An Exhaustive Dictionary Of The English Language, Practical And Comprehensive," Google Books (accessed May 16, 2017)