Vicky Hartzler
stated on March 24, 2016 in an interview with ABC17 News:
"We have less Americans working now than in the ’70s."

Following the State of the Union and President Barack Obama’s claims of job creation, one member of Missouri’s congressional delegation said things aren’t so promising.

U.S. Rep. Vicky Hartzler, R-Columbia, said, "We have less Americans working now than back in the ‘70s, so we do need to still address that and get our economy going."

We reached out to Hartzler’s office to get a better idea of what she meant. Communications Director Kyle Buckles said the congresswoman was referring to the employment-population ratio from 1978 and 1979.

We looked into these numbers, as well as some other measures to gauge the portion of the population that is working.

The Bureau of Labor Statistics defines the employment-population ratio as the proportion of civilian noninstitutionalized population aged 16 years and over that is employed.

This chart shows the ratio throughout the 1970s. 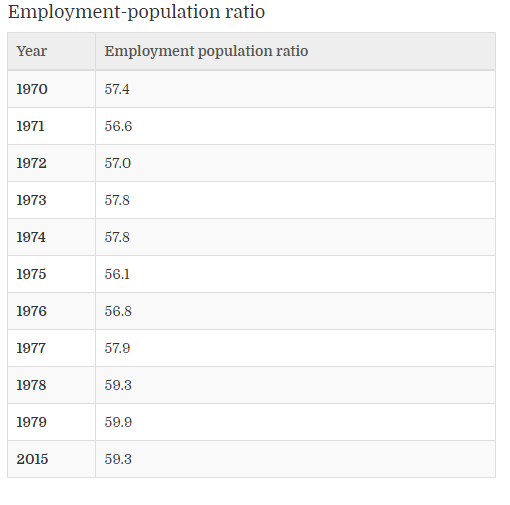 Another frequently cited indicator used to compare employment numbers is the labor force participation rate. This is a little different from the employment-population ratio because it compares how many people are in the labor market — whether they have a job or not — to the total number of people who could be working.

One tricky issue with these numbers is how the aging population has affected the labor force between the 1970s and 2015.

Joe Biden
stated on January 12, 2023 in remarks at the White House
“Take-home pay for workers is going up.”

During testimony before a Congressional committee, Elisabeth Jacobs, a senior director at the Washington Center for Equitable Growth, said the clearest cause for a declining labor force participation rate is the aging population. 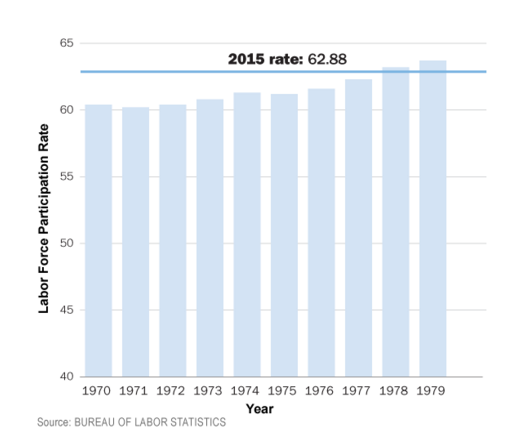 If we use the two years Hartzler’s staff said she was referencing, 1978 and 1979, we find the labor force participation rates were 63.2 percent and 63.7 percent respectively. Both of those numbers are greater than 2015’s rate of 62.88 percent.

Bureau of Labor Statistics reports show that by the end of the 1970s, there were nearly 105 million people in the workforce. In 2015, that number had reached more than 155 million. These data show a nearly 50 percent increase in the absolute number of Americans working in 2015 compared to the late 1970s. 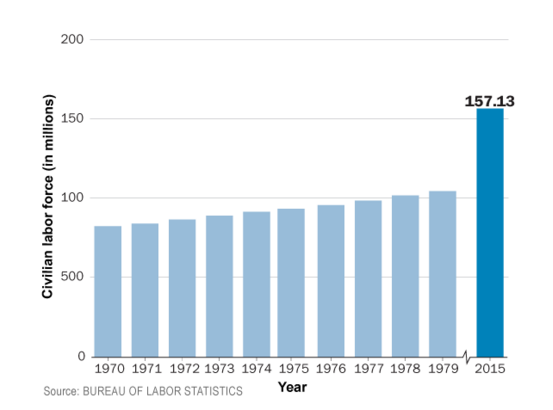 Hartzler said, "We have less Americans working now than in the ‘70s."

The statistics Hartzler’s staff said she cited show the employment-population ratio and labor force participation rate was indeed higher in 1979 than in 2015. However, Hartzler was talking about the entire decade of the ‘70s. When we look at all the years, the claim doesn’t stack up. The first eight years of the decade, 1970 through 1977, have a lower employment-population ratio and a lower labor force participation rate than 2015.

Hartzler’s claim does contain an element of truth, but it ignores critical facts and statistics that would give it a different impression. We rate this statement Mostly False.

Chris Koster
stated on April 22, 2016 a tweet:
"Closing our state’s wage gap would make a $9 billion difference to Missouri women."

Vicky Hartzler
stated on March 24, 2016 an interview with ABC17 News:
"We have less Americans working now than in the ’70s."

Eric Greitens
stated on March 17, 2016 a gubernatorial debate:
"We have ten different tax brackets and if you’re making $9,000, you’re already in the top tax bracket."