Everytown for Gun Safety
stated on March 8, 2016 in a Facebook meme:
The rate of U.S. female homicide victims outnumbers 24 other developed countries by more than 2½ to 1.

We see a lot of statistics about the murder rate in the United States, particularly as part of the debate over gun control. But a Facebook meme making the rounds is contending that the homicide rate for American women is more than two and a half times higher that it is for other developed countries.

A reader in Utah pointed us to the meme on the page of a group called Everytown for Gun Safety, whose web page lists former New York Mayor Michael R. Bloomberg as a member of the advisory board. The reader wondered if it was accurate. We did, too. 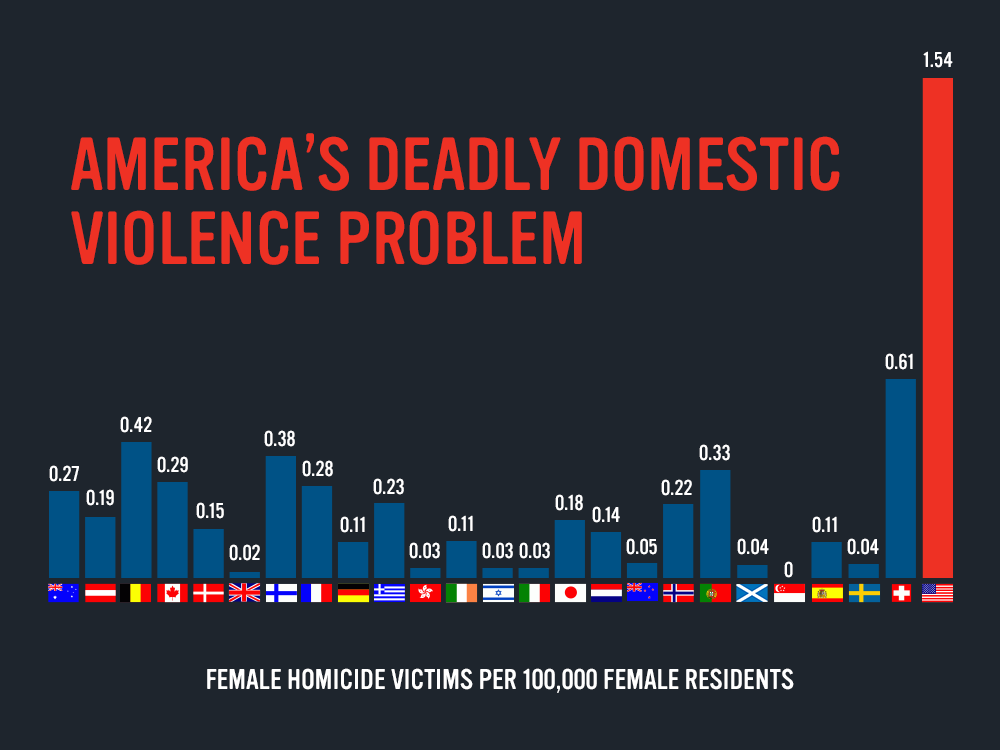 First, a few things to note about the meme.

Although Everytown is an anti-gun violence group, the meme mentions nothing about weapons. The legend at the bottom simply says the chart is listing murder rates.

Also, because the headline on the meme talks about "America's Deadly Domestic Violence Problem," it's not clear if the group is talking about all causes of homicide or just domestic violence homicide.

The answer turns out to be neither.

Erika Soto Lamb, a spokeswoman for the group, said the data come from a 2002 paper in the Journal of the American Medical Women's Association that used World Health Organization statistics on female murder rates — both gun related and non-gun related — from 1994 to 1999.

The data in the Everytown meme are the rates for gun homicides, not all homicides. The rates were from 25 populous high-income countries.

But when you look at all homicides — which the chart claims to be measuring — the rates are different.

"The U.S. female homicide victimization rate was 5 times higher than the rate for the other high-income countries combined," said the researchers, led by David Hemenway, director of the Harvard Injury Control Research Center.

When we contacted Hemenway seeking newer data, he sent us a November 2015 paper done with Erin Grinshteyn of the University of Nevada-Reno, which found that the U.S. homicide rate was 7 times higher than 23 other high-income countries — 25 times higher if you only look at gun deaths. But the paper offers no breakdown by gender. It used 2010 mortality data from the World Health Organization.

We contacted Grinshteyn directly, and she sent us the 2010 rates for women in more detail. We've put it in chart form. 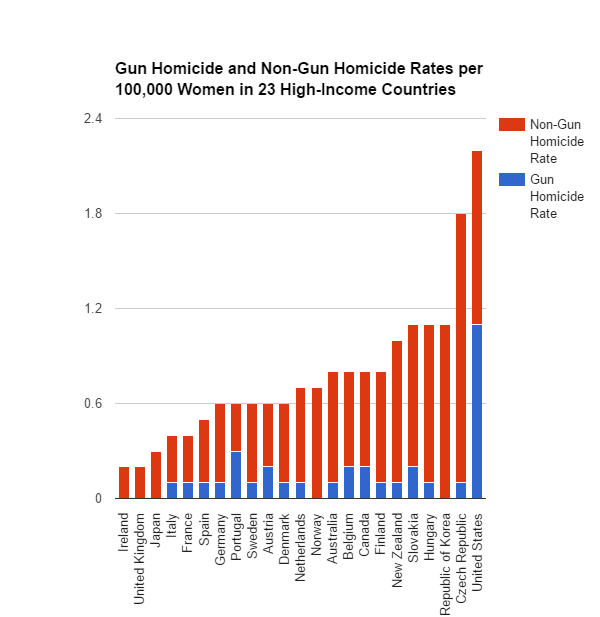 Newer homicide estimates are available in a WHO report released in 2014. They show a similar pattern. In that ranking, female murder rates in the United States in 2012 were much higher than 22 other countries. Finland and Belgium ranked second and third, at 1.3 each, but the difference is not as dramatic as the Everytown Facebook chart.

The report did not compile rates for female gun deaths.

Lamb also said the group was in the process of fixing the chart, which had been shared 1,869 times when we last checked.

Everytown for Gun Safety produced a chart showing that the rate of U.S. female homicides outnumbers the rates in 24 other developed countries by more than 2½ to 1.

But the rates in the chart are for gun-related homicides, not all homicides. Nor are they the rates for domestic violence deaths among women, contrary to the headline on the chart. Finally, the data are about two decades out of date.

The chart gets the general trend right, but most of its actual numbers are off. We rate the statement Half True.