Dan Patrick
stated on October 19, 2015 in an interview with Neil Cavuto of Fox News:
Planned Parenthood is "nothing more than a referral service. … They don’t do anything except profit from killing babies and then selling body parts of those aborted babies."

Patrick, a Republican, appeared Oct. 19, 2015, on "Your World with Neil Cavuto," a Fox News program. That was the day a Texas state official moved to cut off $3.1 million in annual Medicaid funding to Planned Parenthood, 90 percent of it federal aid, for contraception and health services. That came as a result, the official said, of videos showing doctors for the group altered abortion procedures to procure intact fetal tissue for researchers in violation of federal law. Planned Parenthood, denying misconduct, commented that it was considering its options, including a lawsuit.

Patrick, talking to Cavuto, said: "We’re not going to tolerate Planned Parenthood pretending, Neil, to be something they’re not..."

Cavuto: "Do you think that Planned Parenthood does anything good?"

Patrick: "No. I don’t think they do anything good. Look, they’re nothing more than a referral service. They pretend to care about women’s health. But they don’t have professionals even giving any information to women except referring them to another clinic. They don’t  have equipment. They don’t do anything except profit from killing babies and then selling body parts of those aborted babies."

Cavuto: "Well, I understand your passions, sir. But they do a little bit more than that."

There’s been debate about what the videos taken with hidden cameras by the Center for Medical Progress, an anti-abortion group, show about sales of fetal tissue. But on Oct. 7, 2015, PolitiFact Florida rated False a claim that Planned Parenthood has "now (been) found to also illegally sell baby parts." Federal law permits fetal tissue donations to researchers. Abortion providers also are allowed to charge a fee for facilitating such donations.

We focused our sights on whether Patrick is right that Planned Parenthood solely provides abortions.

To our request for backup information, Patrick’s spokesman, Alejandro Garcia, said by phone: "We don’t have anything further to add."

There is lately more up-to-date information. On Planned Parenthood’s website, we spotted a "By the Numbers" document last updated in July 2015 stating that 34 percent of its health services are contraceptive services and 3 percent are abortions.

Another document, "Services," states that in 2013, Planned Parenthood provided more than 4.4 million services related to testing men and women for sexually transmitted infections or diseases; more than 3.5 million contraception services; more than 935,000 services related to cancer prevention and detection; some 1.1 million pregnancy and prenatal services; 327,653 abortions; and nearly 132,000 other services. 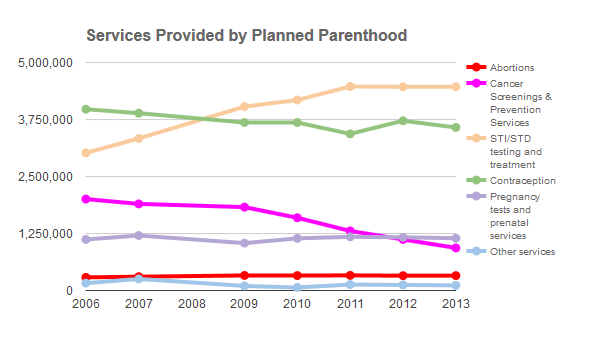 Another chart, likewise drawing from the annual reports, showed counts for abortion and non-abortion services provided by the group: 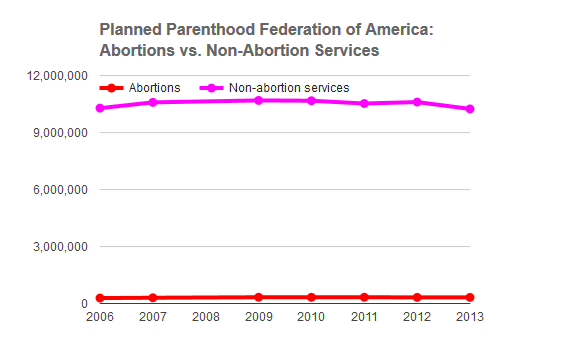 Per all these figures, it’s worth repeating caveats offered by PolitiFact in 2011:

--First, many people would acknowledge a difference between providing an abortion and, say, handing out a pack of condoms or conducting a blood test. The former is a significant surgical procedure, whereas the latter are quick and inexpensive services. So Planned Parenthood’s use of "services" as its yardstick likely decreases abortion’s prominence compared with what other measurements would show. Using dollars spent or hours devoted to patient care would likely put abortion above 3 percent in the calculations.

--Second, Planned Parenthood self-reported these numbers, though the group says each affiliate’s numbers are independently audited. This basically means observers must accept their accuracy more or less on faith.

To our inquiry about Patrick’s claim, Yvonne Gutierrez of Planned Parenthood Texas Votes, which says it battles to protect women’s health care access, said the same range of services are offered in Texas by the group. Gutierrez emailed us an undated Planned Parenthood document indicating that in 2013, its Texas clinics had 150,710 patients including 108,533 contraception patients. The document showed state-by-state counts in those categories and for Pap tests plus tests for sexually transmitted infections, breast exams and sex education and outreach.

Gutierrez also emailed us a chart, attributed to state agencies, distributed by the Texas Health and Human Services Commission. The chart shows $3.1 billion in Medicaid spending on Planned Parenthood-provided services in the fiscal year through Aug. 31, 2015. That spending covered Medicaid reimbursements and payments through health plans for patients who went to Planned Parenthood clinics, Gutierrez said.

We also asked Gutierrez about Planned Parenthood in Texas making fetal tissue available for research. "Planned Parenthood Greater Texas and Planned Parenthood South have never participated in fetal tissue research projects," she replied by email, "and have no plans to do so. While Planned Parenthood Center for Choice (in Houston) does not currently participate in a fetal tissue study, they have taken part in such worthy studies in the past, following all laws and the highest medical and ethical standards. These studies hold the potential to cure disease and save lives. They last partnered with UTMB," the University of Texas Medical Branch, "on a study to prevent miscarriage."

Patrick said Planned Parenthood is "nothing more than a referral service. … They don’t do anything except profit from killing babies and then selling body parts of those aborted babies."

To the contrary, Planned Parenthood provides family planning and other women’s health services, including abortions and there’s been no confirmation it sells body parts.

We rate this incorrect and ridiculous statement Pants on Fire.

Document, "This is where we are.  Working for a Healthy America in Communities Across the Nation," Planned Parenthood Federation of America, July 23, 2015 (received by email from Yvonne Gutierrez, Oct. 20, 2015)