Adan Ballesteros
stated on July 14, 2012 in a political flier:
Says Michael Cargill was "arrested and incarcerated in Bell County."

A political flier directed to voters in north and northwest Travis County claims to tell "the truth about Michael Cargill, candidate for Travis County Constable" -- and depicts him in an orange jumpsuit.

The mailout, which states it was paid for by the Re-Elect Adan Ballesteros campaign, says among other claims that Cargill was "arrested and incarcerated in Bell County," and it lists a case number.

We decided to wade again into the tumultuous race for Travis County Precinct 2 constable, in which Ballesteros and Cargill are opponents in a Democratic primary runoff election July 31, 2012. In June, we examined a political action committee’s claim linking incumbent Ballesteros to drug money, but we found conflicting, unresolvable information and left the statement unrated.

As we began our look at this claim, we ran a LexisNexis background check of public records and commercially available data sources. The search found no criminal convictions in Cargill's past.

Asked for backup, Ballesteros emailed us copies of Bell County records, a black-and-white mug shot and a letter from Lt. Chuck Cox, custodian of records for the Bell sheriff’s office. We confirmed that the documents came from Cox and county clerk Shelley Coston, and we got descriptions of the case from Cox and Kathryn Brock-Jones, manager of the county attorney’s Hot Check Office. We also received screen shots of the remaining records in the 1999 case, which are computerized, from Tina Syme, criminal department supervisor at the county clerk's office.

According to the records and our email and phone interviews with Syme, Brock-Jones and Cox, Cargill was arrested May 18, 1999, on a warrant stemming from a 1997 bad check charge. He was taken to the Bell County jail, paid the money he owed on the check and was released from the jail the next day, and the misdemeanor charge was dismissed.

There was no conviction and Cargill’s time at the jail was not time "served" as punishment, Cox told us. In fact, Cox said, Cargill was immediately eligible to have it erased from his record.

Cox confirmed that the records show that Cargill was physically in the jail overnight.

Brock-Jones told us that Cargill was charged with issuance of a bad check, a Class C misdemeanor, rather than the more serious charge of theft by check. That plus the fact that Cargill had no history of bad checks, she said, means that his case likely involved only one check of a small amount, around $20.

We wondered, too, about the front of Ballesteros’ flier depicting Cargill in an orange jumpsuit.

Cox called the image of Cargill in the orange outfit a "fabrication." Cargill’s real booking photo is a black-and-white Polaroid showing him wearing civilian clothes, Cox told us -- which also was the image Ballesteros emailed us when we asked for his backup documentation. At the time Cargill was detained, Bell County used orange uniforms solely for suspected felons, Cox said. 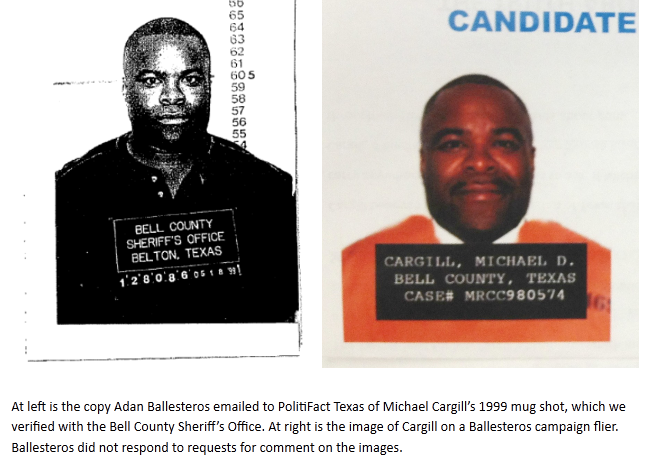 As we gathered these accounts, we also checked in with Cargill, who initially told us he was not arrested or jailed.

Cargill told us by phone that the original check, which he said was for $20, bounced from a checking account he had closed before he deployed to Bosnia with the U.S. Army. Overseas, he said, he did not receive the notification that Bell County would have sent him once the hot check was reported.

When he returned from Bosnia, he said, he was unaware of the warrant until he was pulled over while driving because "my little Chihuahua who was sitting in the middle of the center console was blocking my view," he said. "They ran my license; that popped up, and I went down, we took care of it. I didn't even know that was there because, like I said, you know, I was deployed. ... Never saw a judge, any of that. Didn’t go to court. Nada."

In a follow-up interview, he agreed that his trip to the jail amounted to an arrest, but, despite what officials had told us based on Bell County records, he said he was not in the jail for a day. "I was only there a few hours," he said. "I know I was not there 24 hours. I was not there, you know, a full day, I know that for a fact. One hundred percent."

Cargill disputed Ballesteros’ word "incarcerated" as well. "Incarcerated means convicted and spent time," he said. "I was never incarcerated." Cargill told us he would say he was "detained."

Merriam-Webster gives two definitions of "incarcerate," the first being "to put in prison" and the second being "to subject to confinement."

We suspect most people would interpret Ballesteros’ phrase "arrested and incarcerated" to mean Cargill served time as punishment for a crime -- which he did not, as our background check suggested. Nor did Cargill wear the garish jumpsuit shown on the flier.

But Cargill was brought to the jail on a warrant for his arrest and held there briefly -- perhaps overnight -- before the charge was dismissed.

We rate the claim Mostly False.