This year’s Super Bowl brought a capacity crowd of more than 70,000 to SoFi Stadium in Inglewood, California.

The decision not to limit the number of fans in attendance was a contrast with last year, when the Super Bowl was played in front of a crowd of just 25,000 fans (and 30,000 cardboard cutouts).

Some social media users said the packed stadium was proof that Americans have nothing to fear from the coronavirus.

"If 70,048 unmasked fans can gather for the #SuperBowl in LA," said one Feb. 13 post, "kids should go unmasked in school, churches should be packed, fear should be GONE from Americans."

The post is expressed as an opinion about what the rules should be in schools, so we didn’t issue a Truth-O-Meter rating. But we did want to take a closer look at the premise of the argument, and the comparison the post makes between the stadium and school environments.

What we found is that the post, and others like it, ignore the safety rules that were in effect at SoFi stadium. They also gloss over important differences in the risk of COVID-19 transmission between an indoor-outdoor stadium filled with fans bound by the Super Bowl’s entry rules and school buildings, where testing is not always required and some children are not vaccinated.

The Facebook post says that "70,048 unmasked fans" gathered for the game. Many fans were seen without masks, but several steps were taken to help prevent the spread of COVID-19, including a mask requirement.

In accordance with Los Angeles County’s mask policies, Super Bowl attendees were required to wear masks "​​at all times within SoFi stadium unless actively eating or drinking," the NFL’s website said. Fans were given KN95 masks when entering the stadium, and masks were mandatory for everyone inside the stadium over 2 years old, regardless of vaccination status.

Ahead of the game, officials reiterated their commitment to the rule and said they would enforce it. Only those drinking and eating would be allowed to remove their masks, they said. "That doesn’t mean you buy a bucket of popcorn and eat it for two hours," said Russ Simons, who is in charge of the campus and facility operations for SoFi Stadium. "We’re on to you."

Some fans complied, like this Bengals fan whose mask showed team spirit. 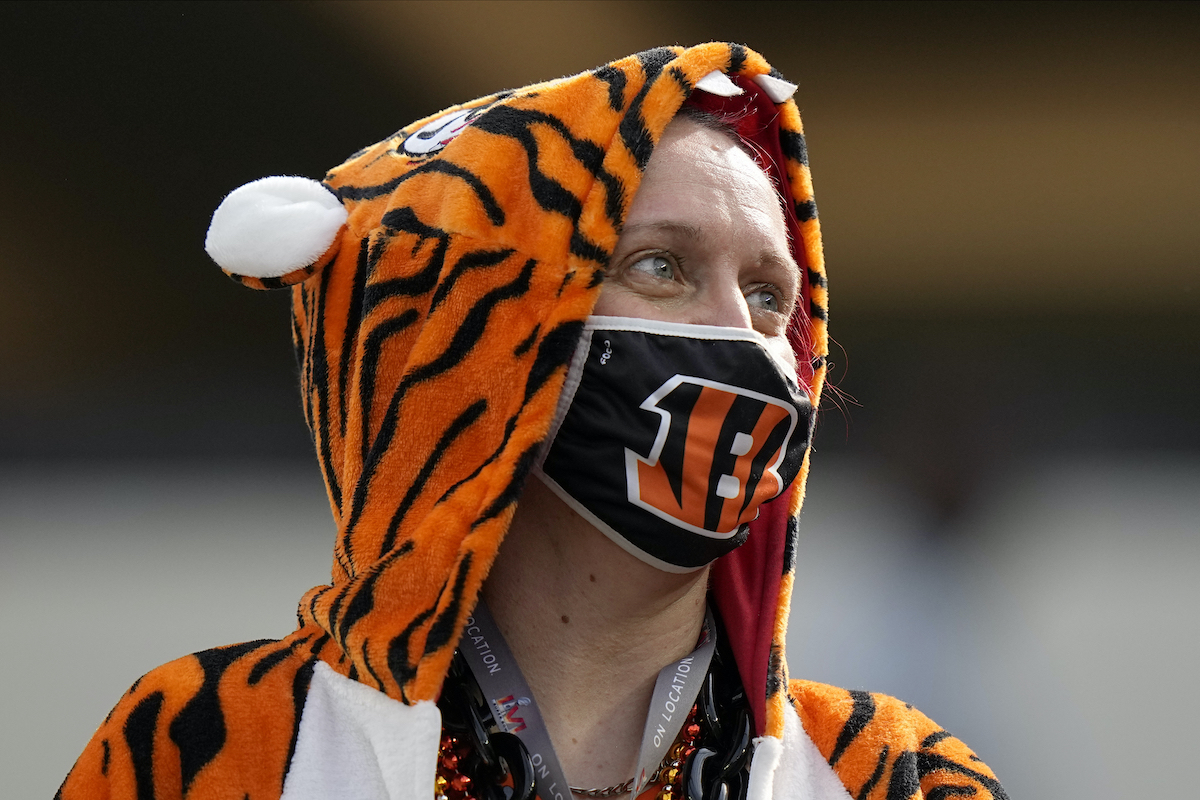 A Cincinnati Bengals fan watches players warm up before the Super Bowl. (AP)

But TV coverage and images from the Feb. 13 game suggest the enforcement was spotty at best. Many spectators appeared to be ignoring the mask rule. 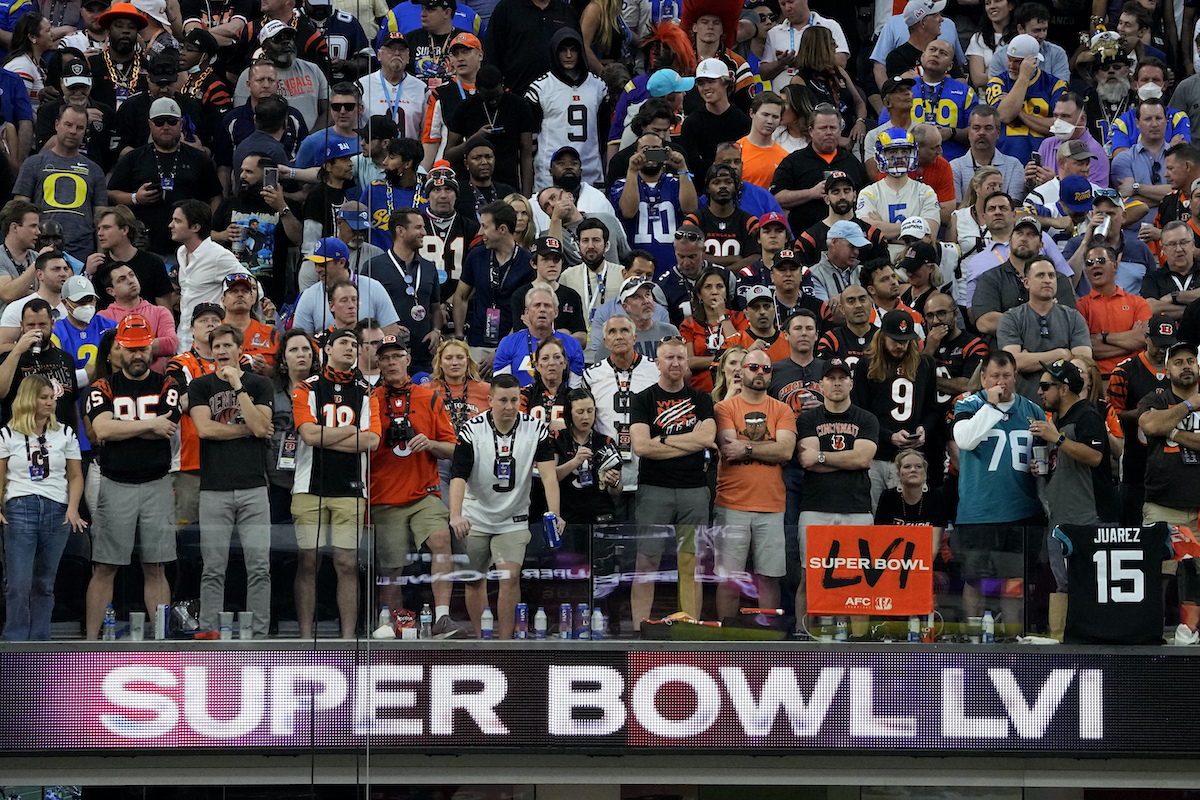 Fans watch the action during the first half of the Super Bowl. (AP) 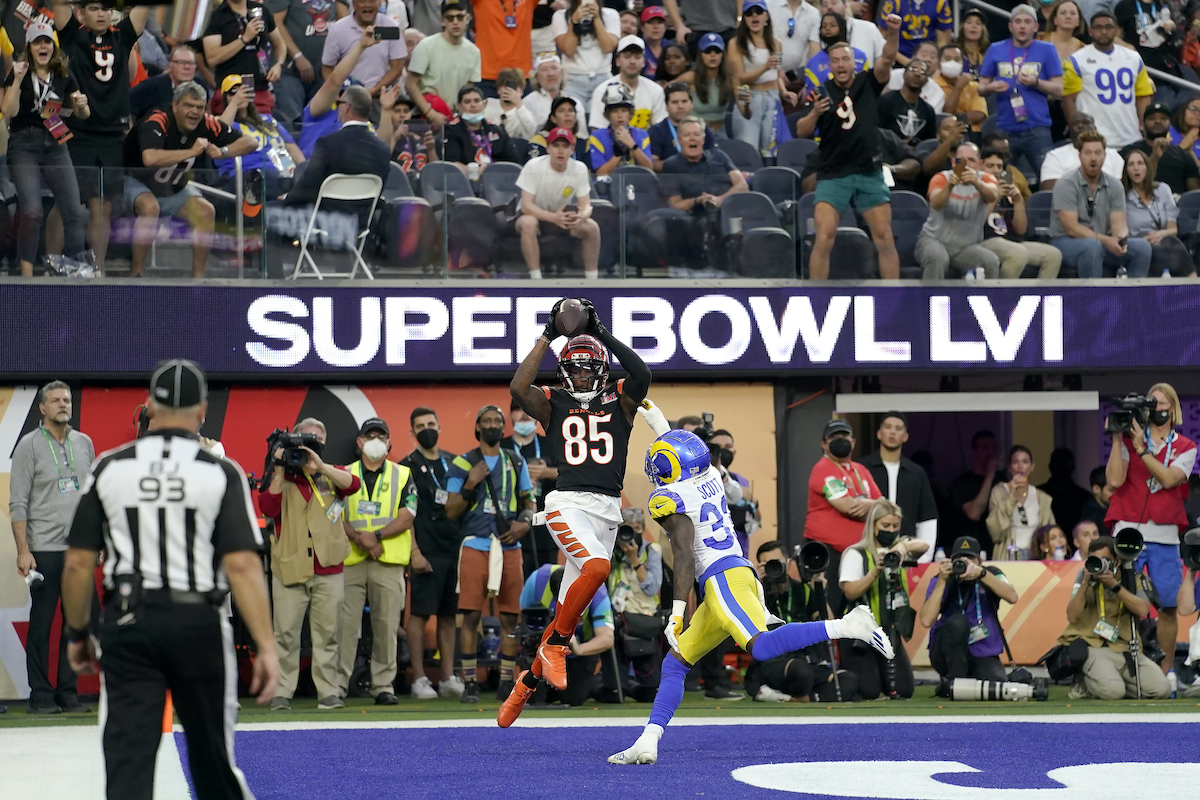 Those added rules make it difficult to compare the risks at the stadium to a typical school building that may have a mask requirement.

The CDC recommends "universal indoor masking" for students, staff, teachers and visitors to K-12 schools, regardless of vaccination status.

The rules vary widely across the country, though, based on state policies and local health regulations. Many areas and districts are relaxing their mask rules in response to declining COVID-19 cases.

Four states prohibit districts from implementing universal mask mandates in schools, according to Education Week. As of Feb. 15, 14 states had mask mandates in place — though some states, such as Massachusetts, Oregon and Rhode Island, recently announced plans to end them.

California, where the Super Bowl was played, will reevaluate its statewide school mask mandate on Feb. 28.

As for COVID-19 vaccines, in most school districts, they are not mandatory for students.

In 17 states, districts are not allowed to list COVID-19 vaccines as required vaccinations.

New Orleans’ public school district has a COVID-19 vaccine mandate in place for eligible students, and districts in Louisiana and California plan to mandate COVID-19 vaccines for the next school year.

Vaccination of young children has slowed after an early spike. Using Centers for Disease Control and Prevention data, the Kaiser Family Foundation estimated that only about 19% of 5- to 11-year-olds were fully vaccinated as of Jan 22, 2022, with wide variations between states and regions. Meanwhile, 61% of parents of 12- to 17-year-olds said their child had gotten at least one dose of a COVID-19 vaccine as of January 2022, a Kaiser survey found. A quarter of the parents said they will "definitely not" get their 12- to 17-year-old vaccinated.

There are no COVID-19 vaccines yet authorized for children under the age of 5, some of whom attend school.

In some districts, for example, students have been required to provide negative COVID-19 tests before returning to school after a break. In contrast, school districts in Massachusetts were prohibited from requiring such a test.

Some students are required to provide proof of a negative test after they’ve been exposed to COVID-19, though this requirement varies from district to district and is sometimes dependent on vaccination status.

In some places, students who were exposed to the virus are required to either quarantine or participate in a "test to stay" program, where asymptomatic students are repeatedly tested for COVID-19 in the days following their exposure.

Dr. Mark Ghaly, secretary of the California Health and Human Services Agency, addressed the issue at a news conference the day after the Super Bowl, the same day the state announced it would delay lifting the state’s school mask mandate.

When asked why California wasn’t dropping its mask mandate for schools despite thousands appearing to be unmasked at the Super Bowl just a day earlier, Ghaly said the agency was taking time to work with local communities and was waiting to see if trends in data persist.

"We’ve always let local conditions be an important driver in determinations," he said. "We are taking a little bit more time to consider the information, work with our partners across the state to make sure, when the move is made, that we are doing it successfully and with communities empowered to continue to be safe."

RELATED: Did the NFL ask Eminem not to kneel? What we know about Super Bowl halftime show claims

NFL, "Health and Safety Protocols for entry into the Stadium on Gameday," accessed Feb. 14, 2022

RadioTimes.com, "How many fans are at the Super Bowl? Official attendance confirmed at SoFi Stadium," Feb. 10, 2022

The Sacramento Bee, "California won’t lift its mask mandate for schools just yet despite drop in COVID cases," Feb. 14, 2022

Chalkbeat, "COVID protocols: What you need to know about changing guidance in Chicago schools," Jan. 31, 2022