Police confusing firearms for stun guns: How often does it happen?

Two major events are unfolding in Minnesota: the trial of a former police officer charged in the death of George Floyd, and protests over the recent fatal police shooting of Daunte Wright.

Both cases involved white police officers and Black men. Many people around the country say that Wright’s April 11 shooting in Brooklyn Center, Minn., is another example of police using excessive force against Black Americans.

Brooklyn Center police say that the officer did not intend to fatally shoot Wright during a traffic stop. Based on the officer’s body camera footage, the police chief said he believes the officer meant to use a stun gun, a weapon that deploys bursts of electricity, not one that discharges bullets.

"As I watched the video and listened to the officer's commands, it is my belief that the officer had the intention to deploy their Taser, but instead shot Mr. Wright with a single bullet," Tim Gannon, Brooklyn Center’s then-police chief, said April 12, a day before resigning. "This appears to me — from what I viewed in the officer's reaction and distress immediately after — that this was an accidental discharge that resulted in the tragic death of Mr. Wright."

PolitiFact wondered if it’s common for officers to discharge a firearm instead of a stun gun, how it happens, what precautions would keep it from happening and how courts have ruled in similar cases. Here’s what we found.

What are stun guns?

In general, a stun gun is a less lethal weapon compared with a firearm. It's intended to be used to get someone in custody, not to create serious bodily harm or death, said Geoffrey Alpert, a University of South Carolina criminology professor who has researched police training and police use of force.

Conducted energy devices, or stun guns, discharge a high-voltage, low-amperage jolt of electricity and can be used to temporarily immobilize a person. When talking about these types of devices, people colloquially use the word "tasers." TASER International, now known as Axon, in 1999 began selling stun guns shaped like handguns to U.S. law enforcement agencies. The company sells different models under its Taser line.

Brooklyn Center police officers use a Taser device, according to the department’s policy manual.

Axon says its Taser devices fire two pronged darts, propelled by compressed nitrogen. "The darts are tethered to insulated copper wire which conduct the electricity from the Taser into the attacker’s body. When both darts hit, if the electrical circuit is completed and maintained, it may cause the attackers muscles to contract and they may lose voluntary muscle control," the company’s website said.

Is it common for police officers to say they mistakenly used a firearm instead of a stun gun?

It’s "extremely rare," but it does happen, Alpert said.

The Minneapolis Star Tribune reviewed press and court filings and found that since 1999 there have been at least 11 instances nationwide in which an officer said they discharged a firearm instead of a stun gun. Most cases resulted in injuries and not deaths, and most cases did not lead to criminal charges, the Star Tribune found.

The New York Times similarly said it reviewed 15 cases of "so-called weapon confusion" over the past 20 years. It found that five officers had been indicted, and "only three, including the only two cases in which people were killed, were eventually found guilty."

The officer involved in Wright’s case, Kimberly Potter, resigned from the department.

She was arrested April 14 and charged with second degree manslaughter.

What distinguishes how a stun gun is handled?

Brooklyn Center police officers are trained to carry handguns on their dominant side and the stun gun on their weak side, Gannon said. "So if you're right-handed, you carry your firearm on your right side and you carry your Taser on the left," he said.

We don’t know if Potter is left- or right-handed. But the Washington County Attorney’s Office said that a Minnesota Bureau of Criminal Apprehension investigator examined Potter’s duty belt and found that the handgun is holstered on the right side of the belt and her Taser is on the left side.

The attorney’s office added that the grips or handles of both the gun and Taser face Potter’s rear, and "the Taser is set in a straight-draw position, meaning Potter would have to use her left hand to pull the Taser out of its holster." Video shows she was handling the firearm with her right hand.

The graphic footage released by police shows two officers, plus Potter, approaching Wright’s car. Potter is initially standing back while one officer leans into the driver’s side and the other officer leans into the front passenger’s side. Wright eventually emerges from the driver’s seat, and as one of the officers appears to begin handcuffing him, Wright rushes back into his seat. Potter and the other officer then appear to engage in a scuffle with Wright.

Potter fired one round from her Glock 9mm into Wright’s left side, according to the Washington County Attorney’s Office.

The police chief said that Potter followed training when she shouted "Taser" several times before discharging the weapon. "That is done to make her partners aware as well as the subject that a Taser deployment will be eminent," Gannon said. "During this encounter, however, the officer drew their handgun instead of their Taser."

Potter was a field training officer and had been with the Brooklyn Center police department for 26 years.

Do stun guns look or feel any different than firearms? 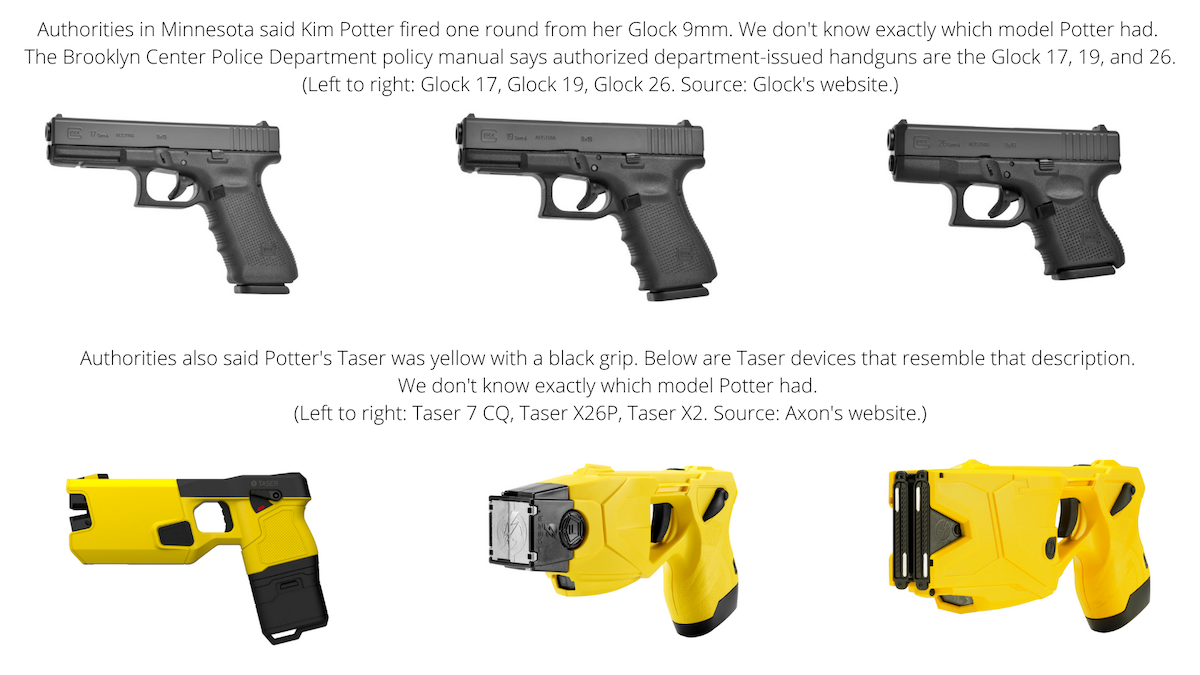 (Image created using screengrabs from Axon and Glock websites.)
Stun guns are a different color from firearms, but they often still feel like a gun, Alpert said. So, under stress, the error of holding a firearm instead of a stun gun may not be the most obvious, he said.

It’s in the process of pulling a weapon where a mistake would become much more obvious, Alpert said. Based on common training, right-handed officers pull their firearms from their right side; to pull a stun gun, they need to reach their left side.

The Washington County Attorney’s Office said Potter’s Taser was yellow with a black grip. It did not specify the Taser model.

Axon said it could not comment on the circumstances of Wright’s death. But it said that, over the years, it has implemented features and training recommendations to reduce the possibility of incidents like the one in Brooklyn Center.

Axon said its Taser energy weapons are lighter than firearms and have a different grip and feel. Also, some models are yellow to contrast a black firearm and have an LED control panel that lights up when the safety is taken off.

Alpert also noted that typically, police officers are trained to use stun guns when they are 10 to 12 feet away from a subject. And they are not supposed to aim at a person's chest, he said.

"That's part of manufacturers' disclaimer," Alpert said, because the chances of someone dying are higher if they are stunned close to the heart.

The Hennepin County Medical Examiner said Wright died of a gunshot wound to the chest.

Minneapolis Star Tribune, Cases in which a service pistol is mistaken for a Taser are rare, April 12, 2021