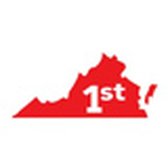 The Virginia First Foundation is a conservative public interest group. It's interests, according to its website, are: God-given individual rights. Especially, those enumerated in the Bill of Rights. The Rule of Law. Constitutionally-limited government. Representative democracy in a federal Republic. The Government of the United States limited by the U.S. Constitution. Our sovereign state - Virginia, as a Commonwealth - with plenary powers. The People are the sovereign of the Commonwealth – and delegate powers and authority to the Commonweatlh in our Virginia Constitution. As the Virginia Constitution says – mutual duty of all to practice Christian forbearance, love, and charity towards each other – for religious tolerance. Let Virginia be the safest place to be a practicing Christian, Jew or non-believer. The moral-ethical standards of our Judeo-Christian culture in Virginia. The sanctity of life. Especially for the weakest of humans – the babies in the womb, the elderly and sick.  The family – built on the marriage of one man and one woman. Free market economics. Protection of our environment – the land, water and air of Virginia. Educating children about our common history, culture and citizenship.