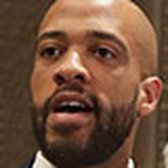 Mandela Barnes is an American politician serving as the 45th lieutenant governor of Wisconsin. A member of the Democratic Party, Barnes is a former state representative. On August 14, 2018, he won the Democratic primary in a landslide and became the running mate of Democratic gubernatorial nominee Tony Evers. Evers and Barnes went on to win the November 2018 election, defeating incumbent Republicans Scott Walker and Rebecca Kleefisch. Barnes became Wisconsin's first African American lieutenant governor.