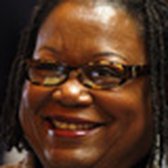 Mamie Locke, D-Hampton, has been a member of the Senate of Virginia since 2004. She served on the Hampton City Council from 1996 to 2004, spending the last four years as mayor. Locke received a Ph.D. in political science from Atlanta University in 1984. She is a professor of poitical science at Hampton University.