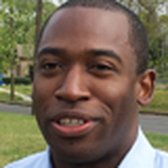 Levar Stoney is a 2016 candidate for mayor of Richmond. Stoney was appointed Secretary of the Commonwealth in 2014 by Virginia Gov. Terry McAuliffe. He resigned the post in April 2016 to run for mayor. Prior to that, he served as executive director of the Virginia Democratic Party and worked in a number of campaigns. Stoney was born in 1981 in New York and later moved to Yorktown, Va. He graduated from James Madison University in 2004, where he was president of the student government.