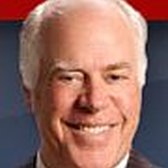 John Raese is president and CEO of Greer Industries, a steel and limestone company in Morgantown, West Virginia. He was the Republican candidate in a special election to fill the unexpired term of the late Sen. Robert Byrd in 2010, losing to Democrat and then-Gov. Joe Manchin. Raese is the former chairman of the West Virginia Republican Party and has run several statewide campaigns.