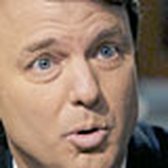 John Edwards is a former U.S. senator from North Carolina who was John Kerry's running mate in 2004. A personal injury attorney, Edwards was born in South Carolina in 1953 and now lives in Chapel Hill, N.C. He graduated from North Carolina State University and earned a law degree from the University of North Carolina Law School. He is married to Elizabeth Edwards, who has been diagnosed with cancer. They have three children; a fourth was killed in an auto accident. He withdrew from the presidential race on Jan. 30, 2008.