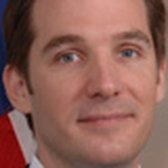 Glenn Nye, a Democrat, represented Virginia's 2nd Congressional District from 2009 until 2011. The district includes Virginia Beach, the Eastern Shore and parts of Norfolk and Hampton. He now works as the senior political adviser at Hanover Investment Group, Alexandria. Nye was born in Philadelphia, but grew up in Norfolk. He graduated from Georgetown University, Washington, D.C. He previously served in the Foreign Service of the U.S. State Department in Kosovo, Macedonia, Singapore and Afghanistan. He also worked for the U.S. government on development projects in the West Bank, Gaza and Iraq.