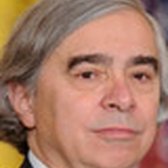 Ernest Moniz served in as the associate director for Science in the Office of Science and Technology Policy in the Executive Office of President Bill Clinton from 1995 to 1997 and in the U.S. Department of Energy, serving as Under Secretary of Energy, from 1997 to 2001. He joined the faculty of Massachusetts Institute of Technology in 1973, serving as Head of the Department of Physics from 1991 to 1995 and as director of the Bates Linear Accelerator Center. He also co-chairs the MIT research council.