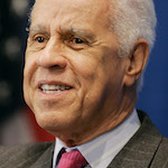 Doug Wilder became the nation's first elected Black governor in 1990 when he was inaugurated in Virginia. Wilder, a Richmond native, is the grandson of slaves. He earned a science degree from Virginia Union University and a law degree from Howard University. He served in the Army during the Korean War and was awaarded a Bronze Star. Wilder, a Democrat, was elected to the Virginia Senate in 1969 and lieutenant governor in 1985. He was elected governor in 1989, narrowly defeating Republican Marshall Coleman. Wilder served during a recession and was credited for not raising taxes to offset decling state revenues. His popularity fell in Virginia when he ran a short-lived campaign for the Democratic presidential nomination in 1991. Wilder's term as governor ended in 1994. Virginia does not allow its governors to serve successive terms. Wilder was elected Richmond mayor in 2005, a position he held for four years. He's now a disntiguished professor at Viginia Commonwealth University.