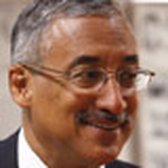 Bobby Scott, D-3rd, has been a member of the U.S. House of Representatives since 1993. The district is comprised of all of Charles City and Surry counties and Petersburg and Portsmouth and portions of Henrico and Prince George counties and Hampton, Newport News, Norfolk and Richmond. Scott has seats on the Judiciary and Education and Labor committees. Scott previously served in the Virginia House of Delegates in 1979-83 and in the state Senate in 1983-93. He was a member of the National Guard and U.S. Army Reserve. He was a lawyer in a private practice from 1973-91. Scott was born in Washington, D.C. He earned a bachelor's degree from Harvard University, Cambridge, Mass., in 1969 and a law degree from Boston College in 1973.