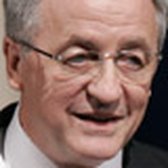 Bob Marshall, a Republican, respresents the 13th District -- parts of Prince William and Loudoun counties -- in the House of Delegates. He was first elected in 1992 and serves on the Finance, Counties CIties and Towns, and Science and Technology committees. Marshall ran unsuccessfully for the Republican nomination for U.S. Senate seats in 2008 and 2012. Marshall was born in Takoma Park, Md. He earned an associates degree from Montgomery College, Montgomery County, Md., in 1965, a bachelor's degree from Belmont Abbey College, Belmont, N.C., in 1969, and a master's degree from California State University, in 1991. Before and during his time in the state house, he has worked for the American Life League, a nonprofit Catholic group that opposes abortion.