Citizens Against Government Waste
stated on August 31, 2022 in a Facebook ad:
“More than half of the $739 billion tax increase (in the Inflation Reduction Act) will go to wasteful Green New Deal programs like tree equity, 'clean' garbage trucks, and studying cow farts."

• Calling the $739 billion figure a tax increase is exaggerated. Not counting federal health care savings that are counted as revenue for budgetary purposes, the scale of the tax increase is about $457 billion.

• The bill’s environmental provisions do add up to $391 billion, or more than half of $739 billion. However, the amount spent on trees, clean trucks and cattle emissions account for a tiny fraction of that, somewhere between half of 1% and 1.4%.

As the most conservative Democrat serving in the Senate — and as a senator representing West Virginia, a state that supported Donald Trump in 2020 by almost 39 percentage points — Joe Manchin has stoked critics on both the right and the left.

For months, Manchin balked at supporting President Joe Biden’s climate change agenda, irritating many of his fellow Democrats. But then, this past summer, quiet negotiations between Manchin and Senate Majority Leader Chuck Schumer, D-N.Y., produced a breakthrough, enabling Manchin to support what became the Inflation Reduction Act.

The bill passed the House and Senate on party-line votes before Biden signed it into law. Suddenly, Manchin’s role in enabling the bill’s enactment prompted criticism from conservatives.

One of the groups criticizing Manchin was Citizens Against Government Waste, which advocates for "the elimination of waste and inefficiency in government." Officially, the group is nonpartisan, but its focus on cutting federal spending tends to align with Republican policies. In its 2021 congressional vote ratings, House and Senate Republicans scored vastly better than House and Senate Democrats did.

After the Inflation Reduction Act passed, the group named Manchin its "porker of the month" for enabling "pork-barrel" spending. It bought space on Facebook to run an animated ad in which it criticizes Manchin’s vote. ("Pork" or "pork barrel" spending is government spending for localized projects secured primarily or solely for bringing money to political representatives’ districts.)

Part of the ad said, "More than half of the $739 billion tax increase will go to wasteful Green New Deal programs like tree equity, 'clean' garbage trucks, and studying cow farts." 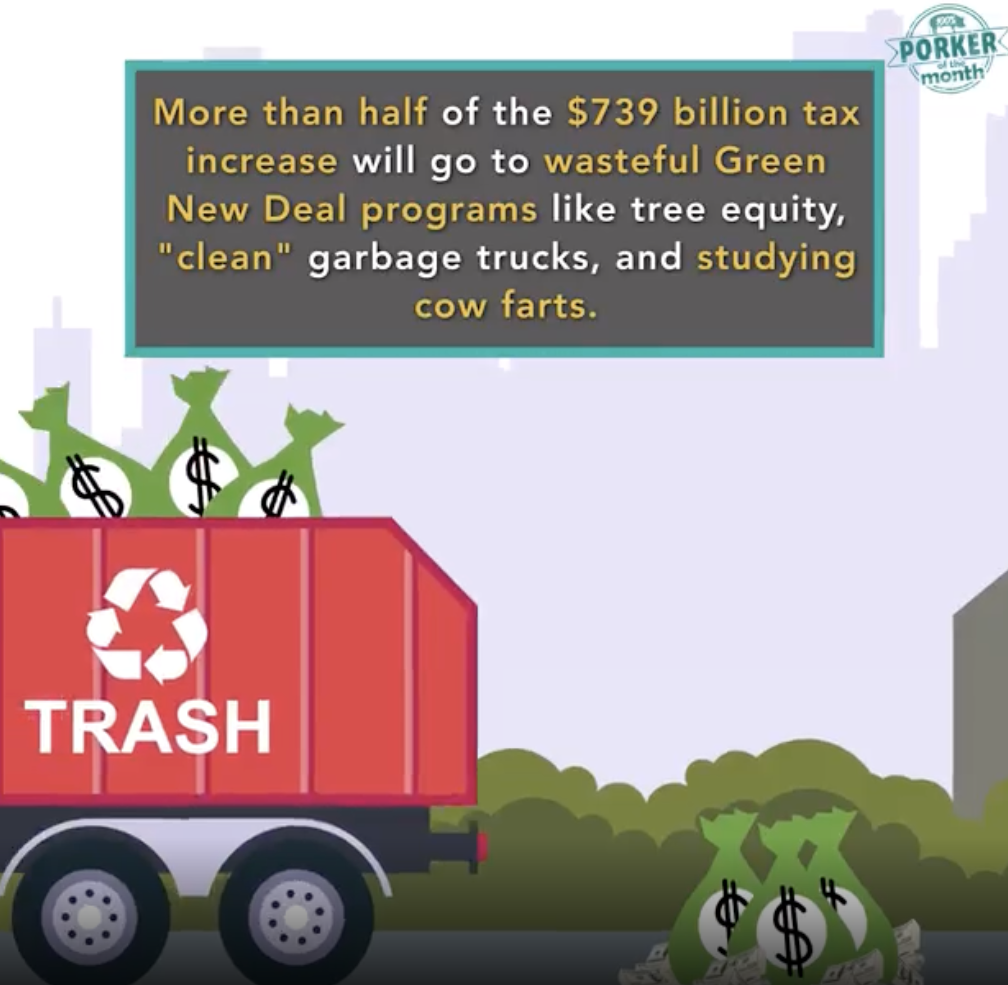 The $739 billion refers to the revenue raised as part of the bill, mostly from tax hikes on the biggest corporations and from federal spending saved by Medicare being able to negotiate drug prices. Because a portion comes from saved spending, it’s not accurate to call the entire $739 billion a "tax increase," as the ad does. The tax portion of the revenue increase is about $457 billion.

Meanwhile, the Green New Deal refers to a far-reaching environmental proposal by progressive Democrats in 2019 that did not make it into legislative form and was never voted on.

Half of the stated $739 billion in new revenue would work out to about $370 billion. So, would provisions on "tree equity, 'clean' garbage trucks, and studying cow farts" cost that much? We decided to find out.

Citizens Against Government Waste did not respond to inquiries for this article.

All told, the legislation would spend $391 billion on climate and energy, according to an analysis of the bill’s revenue and spending provisions by the Peter G. Peterson Foundation, a nonprofit focused on raising awareness about the United States’ future fiscal challenges.

So, more than half of the new revenue raised would go toward environmental and clean energy uses, broadly defined. But the ad’s focus on "tree equity, ‘clean’ garbage trucks, and studying cow farts" cherry-picks a relatively small (and, to some, silly-sounding) portion of that amount.

The bill does include elements that address these topics, but they are only a small fraction of the total amount being spent.

Although the legislation doesn’t use the term "tree equity," it does include a notable investment in tree planting in urban areas, especially those with relatively few trees.

The idea is to "help cities plant more trees in the places where they're needed most," Jad Daley, president and CEO of the environmental advocacy group American Forests, told PolitiFact. Greater tree cover is designed to reduce heat-related deaths, remove carbon from the atmosphere and lower cooling bills, especially in cities.

The new law allocates $1.5 billion to the U.S. Forest Service’s Urban and Community Forestry program, which averages to $150 million a year over the bill's 10-year life. That’s a substantial cash infusion for the program, which has been funded at around $30 million to $40 million per year for the past few years, Matt Spitsen, program development manager for the Arbor Day Foundation, a nonprofit group devoted to planting trees, told PolitiFact in August.

This extends beyond garbage trucks and could cover many other types of heavy-duty vehicles, said Sylvia Chi, an environmental and economic justice attorney with Just Solutions Collective in Oakland, California.

Methane contributes to climate change, and by some estimates, cattle are the No. 1 agricultural source of greenhouse gases worldwide. (Technically, methane comes mostly from cow burps, not farts.) As a result, environmentalists have sought to curb its atmospheric release.

The only provision of the legislation that specifically addresses "enteric methane emissions from ruminants" comes under the heading of agricultural conservation. The legislation allocates almost $8.5 billion for all types of conservation over four years, with the agriculture secretary "prioritizing proposals that utilize diet and feed management to reduce enteric methane emissions from ruminants."

In all likelihood, cattle-related projects would account for a small fraction of that $8.5 billion.

However, even assuming that 100 percent of that sum goes to fund cow-fart projects, the total for tree planting, "clean" garbage trucks and cattle emissions would amount to $10.6 billion, or 1.4% of the $739 billion in new revenue — not "more than half."

And if only 10% of the conservation grants went to cattle projects, that would make the total for the three categories a little less than $3 billion, or less than half of 1% of the $739 billion in revenue raised.

The Citizens Against Government Waste ad said, "More than half of the $739 billion tax increase (in the Inflation Reduction Act) will go to wasteful Green New Deal programs like tree equity, 'clean' garbage trucks, and studying cow farts."

First, calling the $739 billion a tax increase is exaggerated. Not counting federal health care savings that are counted as revenue, the tax increase’s scale is about $457 billion.

The bill’s environmental provisions do add up to $391 billion, or more than half of $739 billion. However, the amount spent on trees, clean trucks and cattle emissions account for a tiny fraction of that, somewhere between one-half of 1% and 1.4%.

Peter G. Peterson Foundation, "What is in the Inflation Reduction Act and How Much Will It Reduce the Deficit?" Aug. 5, 2022

PolitiFact, "What Herschel Walker gets wrong, and right, about federal funding for more trees," Sept. 1, 2022

Citizens Against Government Waste
stated on August 31, 2022 a Facebook ad:
“More than half of the $739 billion tax increase (in the Inflation Reduction Act) will go to wasteful Green New Deal programs like tree equity, 'clean' garbage trucks, and studying cow farts."